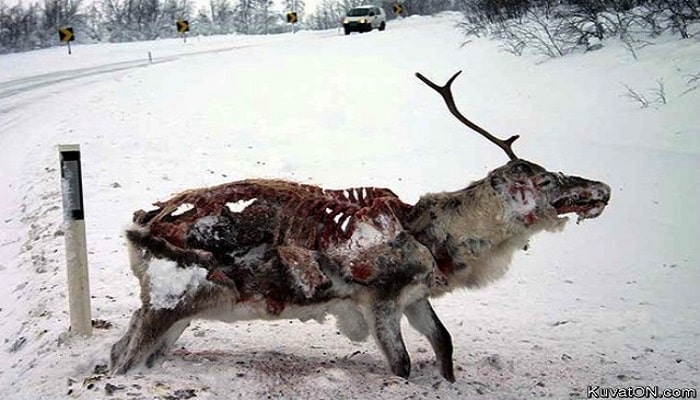 Ever since the dawn of zombie movies, people have often wondered what kind of disease will it take to turn human beings into mindless undead. Turns out a disease is not needed at all; a president will do. Joking aside, there is now an animal disease that could actually threaten human beings with a bad infection and it is dubbed “zombie deer disease.”

Apparently, the said disease affects deer, elk and moose species. It makes them behave in a strange and often more aggressive manner without their control, like zombies. It is quite similar to the mad cow disease but now, it seems the zombie deer disease is more widespread as it has proliferated throughout half the United States and even some parts of Canada:

The said disease is Chronic wasting disease (CWD) and attacks the brain and spinal cord, rendering the victims confused and aggressive. It is currently incurable and the symptoms could take a while to appear, meaning a hunted deer or some roadkill with hooves could look healthy enough to be consumed by humans, only for the disease to manifest later on.

The disease should not be underestimated since it is progressive and always fatal. Like mad cow disease, CWD also might be able to develop or mutate to have a human variant as well.

“It is probable that human cases of CWD associated with the consumption of contaminated meat will be documented in the years ahead. It is possible that [the] number of human cases will be substantial and will not be isolated events,” said Michael Osterholm, director of the University of Minnesota’s Center for Infectious Disease and Research Prevention.

Canadian authorities are already advising against consuming or coming in contact with deer, elk, or moose populations. As for how to detect deer, elk, moose, or caribou which may have gotten infected with CWD, they typically show these symptoms:

If, however, handling animals are part of your job or daily life, then at the very least, cautious handling is necessary. Here’s a list on how to stay safe:

CWD was actually discovered back in 1967 and has since been spreading across free-ranging and captive deer-family animal populations in 26 U.S. states. It is caused by a misfolded protein, also known as a , commonly found in the central nervous system.

Further study is needed on how it could spread to affect human anatomy. Currently, there are no reported cases of people infected with CWD yet. Still, experts have suggested that hunters and pretty much everyone else avoid eating venison as a .

On a final note, Osterholm also suggested that “If Stephen King could write an infectious disease novel, he would write about prions like this.” Anyway, stay away from Bambi folks, he’s out for blood.

The Michelle Obama Podcast was released on the 29th of July and can be streamed on Spotify, both for free and premium users. The world is currently hyped that the Former First Lady of the United States has released the first episode of her latest podcast. What made listeners even more excited was when she… END_OF_DOCUMENT_TOKEN_TO_BE_REPLACED

Research in Britain has deduced that there are a total of six “general” classifications of COVID-19 symptoms. The research, originally published in June of 2020, has revealed that the symptoms of COVID-19 can be generalized into six different categories. This is based on the data collected from a symptom tracking app. It has been widely proven… END_OF_DOCUMENT_TOKEN_TO_BE_REPLACED