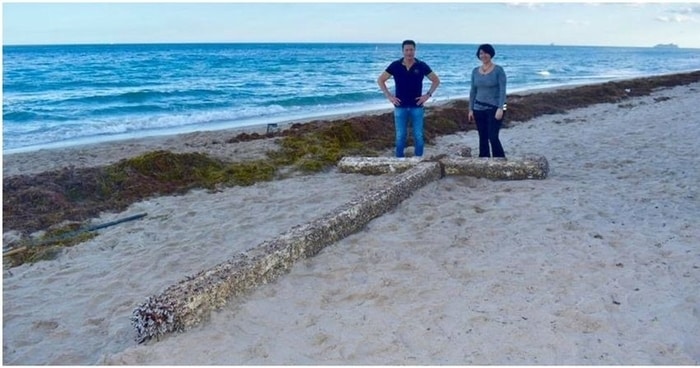 On Saturday, a massive wooden cross drifted onto a beach, leaving locals speechless and wondering if the 20-foot object hints at Jesus‘ return.

Those that frequently comb beaches uncover various astounding items, from treasured seashells and untypical animals to scarce coins. However, no seashore has (ever) been sanctified quite like the one in Fort Lauderdale, Florida by the Ocean Manor Beach Resort.

Frank Telerico, Ocean Manor’s owner, deemed the cross ‘a sign’ that his establishment is protected. He too remarked that his sister had been at the beach praying over a nightmare on the day it was found. Telerico hauled the cross away from the shoreline (with assistance from two ATV‘s and a crew of workers) so tourists could snap photos and marvel at it.

At length, the truth came out on Monday as a local woman disclosed the sorrowful narrative behind the cross.

Robin Stowe informed reporters that she had mounted the cross in memory of Captain Richard Baran, her brother. Captain Aaron Aaron, who constructed the cross, stated he could tell by its styling that the one on Ocean Manor’s waterline was the same.

In 2016, Baran had been near North Carolina’s Hatteras Inlet on a hunting trip when he disappeared. A Coast Guard search for him came up empty, thereby Stowe had the gigantic cross situated into Dredge Island, close to where her brother’s boat was discovered.

She assumes Hurricane Nate winds may have floored the cross in 2017, and it journeyed two years in the ocean prior to resurfacing in Florida. Presently, Aaron and Stowe are awaiting word from Telerico so they can prepare to sail the cross back to its origin.

Gift-giving isn’t just a seasonal affair between friends, families and acquaintances. The art of gift-giving is also conducted on a national scale with countries often sending each other big, weird and expensive gifts. Experts in all things gifts, Vanilla Reindeer put together some examples of these expensive and odd gifts that have been shared between… END_OF_DOCUMENT_TOKEN_TO_BE_REPLACED

There are lots of ways you can make Pres. Trump feel welcome: you can offer him coffee, or mow a penis into a field for him to view as his plane lands. The willie in question has been chopped by Born Eco ahead of the arrival of President Trump, who visited the UK Monday for… END_OF_DOCUMENT_TOKEN_TO_BE_REPLACED

The year isn’t even halfway over, yet Donald Trump has managed to make a fool of himself and our country countless times. From inviting the national college football champions, the Clemson Tigers, all the way to the White House for some McDonald’s to his to the dreaded results of Mueller’s investigation, it has been one… END_OF_DOCUMENT_TOKEN_TO_BE_REPLACED

Republicans have always said that when they gained control in Congress, they would work to overturn Roe v. Wade and here they are, cashing in on that promise one state at a time. So far, Alabama, Arkansas, Georgia, Kentucky, Missouri, and Ohio have all passed incredibly restrictive laws on abortions, making it illegal for women… END_OF_DOCUMENT_TOKEN_TO_BE_REPLACED

If you’re on Snapchat, then you’ve probably played around with (and were likely horrified by) their filter gender swap filters. While you’re probably using these filters to send hilarious pics to your friends, some guys using them to create Tinder profiles. What likely started out as a joke has quickly evolved, and these guys are… END_OF_DOCUMENT_TOKEN_TO_BE_REPLACED

“Milkshaking” is a hilarious trend in Britain where a milkshake is thrown at and ideally lands on a far-right politician or activist. The point of this nonviolence protest is to humiliate them without causing injury. Physical injury at least. There’s no doubt that milkshaking has led to a few bruised egos. Not only is this… END_OF_DOCUMENT_TOKEN_TO_BE_REPLACED