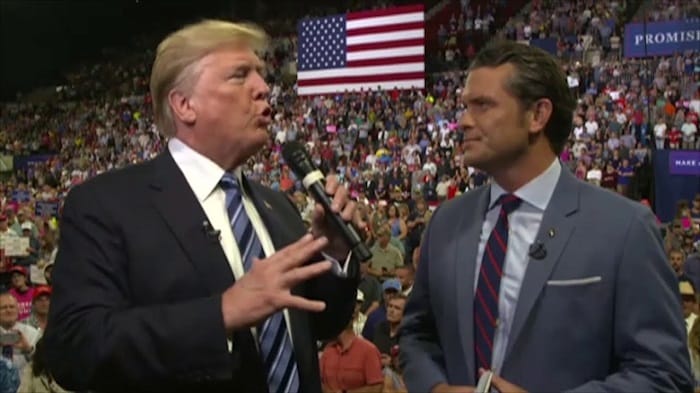 If people ever wonder why existed and why various countries all over the world are now suffering viral outbreaks, well, fake news is half to blame. The other half are people who sorely need a critical-thinking workshop. One Fox News host is probably one of those people, as he claimed that he has not washed hands for a decade since germs do not exist.

Well, that’s Fox News summed up for you, but still. The Fox News host was Pete Hegseth and he made quite some bold claims just this Sunday on the network. During an episode of Fox & Friends, Hegseth had a co-host named Jedediah Bila and the two talked about pizza on their show. Things got quite eyebrow-raising when Bila brought up that he munched on an old pizza.

Soon after that, Hegseth brought up his 2019 resolution, which is to say on air some things which he usually says off air. Hence, the Fox News host claimed that he does not wash his hands, “I don’t think I’ve washed my hands for 10 years.” He claimed that that improves his health and boosts his immune system, being the science expert on Fox News that he is.

“I inoculate myself. Germs are not a real thing. I can’t see them. Therefore, they’re not real,” concluded Hegseth. There’s also the fact that people cannot see their brains, meaning they’re probably not real too, right?

Needless to say, Hegseth is wrong and germs are everywhere, some also mutate constantly and can get deadly. The best and simplest way to protect yourself from germs, bacterias, and viruses is to wash your hands. It also would not hurt to go the extra mile and vaccinate yourself and the ones you love against the most harmful of them. On a final note, please don’t dine with a certain Fox News host.

The Blood Test, The Swab Test, and The Saliva Test      Essentially, there are three general types of COVID-19 testing produced so far. One is the rapid test, the second is the saliva test and the other is the swab test. The rapid test (also known as the anti-body test) uses blood samples. The swab test… END_OF_DOCUMENT_TOKEN_TO_BE_REPLACED

The COVID-19 pandemic is one of the biggest modern pandemics known in history. Currently, there are more than five million confirmed cases in the world, with a total of 333,000 deaths. A total of 1.6 million of these confirmed cases are in the US alone. The world is currently in a race of finding a… END_OF_DOCUMENT_TOKEN_TO_BE_REPLACED

Despite concrete data and research, people’s opinions will always be diverse when it comes to a variety of topics including religion, politics, gender, and more. Denial is a common reaction to many important discussions and serious world events. The COVID-19 pandemic does not differ from any issues and is subject to opinions from critiques all… END_OF_DOCUMENT_TOKEN_TO_BE_REPLACED

Back in January, when the Wuhan, China coronavirus broke out, it didn’t make it to the front page of newspapers, in print or virtual form. Today, January feels like a lifetime away. Like it or not, people around the world have adapted to the new normal – staying at home, frequent hand washing, and social… END_OF_DOCUMENT_TOKEN_TO_BE_REPLACED

Since the beginning of the year 2020, the whole world has been stupefied by the rapid spread of a deadly coronavirus known as COVID-19. World superpowers in the West were unable to prevent the virus from reaching their borders. Because of this fact, the novel coronavirus COVID-19 became a world-wide pandemic no less than three… END_OF_DOCUMENT_TOKEN_TO_BE_REPLACED

For months since the start of 2020, the attention of the world has focused on immediate response efforts to contain and combat the novel coronavirus, also known as COVID-19. The deadly virus has pushed millions of people into isolation.  This kept people in their homes for weeks and months away from their work, their friends,… END_OF_DOCUMENT_TOKEN_TO_BE_REPLACED