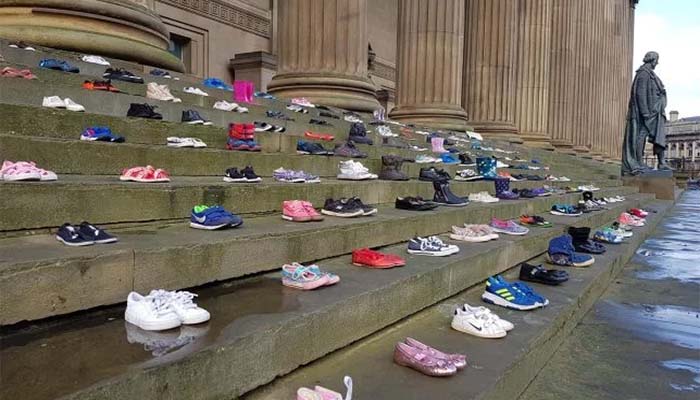 In the same week that Facebook announced it will be making strict changes to its policies regarding self-harm and suicide, a British charity is commemorating children who took their own lives.

Teaming up with Radio City Talk, Chasing the Stigma used 226 pairs of childrens shoes to make the moving display on the steps of Liverpool’s St George’s Hall, each representing a child who to die by suicide in 2017.

Photographs of the installation, called Lost Childhoods, have been shared 16,000 across Facebook and Twitter, with users praising the charity for conveying a hard-hitting message in a form everyone can understand.

One commentor said: “‘Heartbreaking. Mental health needs to be a priority everywhere for all ages.”

Speaking to The Metro, charity spokesperon Jake Mills said: “‘We have been working closely with Radio City Talk and Presenter Mick Coyle for a number of years, around Mick’s Mental health Monday programme.

“Following last year’s award winning 24 hour live radio broadcast dedicated to Mental Health, we wanted to take that conversation out to the public. ‘With the show’s 100th episode falling at the beginning of children’s mental health week it made sense to address the devastating numbers of suicides in young people.

“The statistics are utterly heartbreaking but for many people, they either aren’t aware of the numbers or the reality of the figures doesn’t hit home. ‘Behind every statistic is a life needlessly and tragically lost. We wanted to get that across and so decided to use shoes as a visual representation of those lives.

“Working alongside other charities and organisations such as Papyrus and the Oscar Phillips Foundation we were able to create a campaign that not only raised awareness of the issue but importantly awareness of the help and support that is available.”

The rate of suicide among children and teenagers has shot up over the last decade, with the highest number of girls aged 15 to 19 taking their own life since records began in the 1980s.

Gift-giving isn’t just a seasonal affair between friends, families and acquaintances. The art of gift-giving is also conducted on a national scale with countries often sending each other big, weird and expensive gifts. Experts in all things gifts, Vanilla Reindeer put together some examples of these expensive and odd gifts that have been shared between… END_OF_DOCUMENT_TOKEN_TO_BE_REPLACED

There are lots of ways you can make Pres. Trump feel welcome: you can offer him coffee, or mow a penis into a field for him to view as his plane lands. The willie in question has been chopped by Born Eco ahead of the arrival of President Trump, who visited the UK Monday for… END_OF_DOCUMENT_TOKEN_TO_BE_REPLACED

The year isn’t even halfway over, yet Donald Trump has managed to make a fool of himself and our country countless times. From inviting the national college football champions, the Clemson Tigers, all the way to the White House for some McDonald’s to his to the dreaded results of Mueller’s investigation, it has been one… END_OF_DOCUMENT_TOKEN_TO_BE_REPLACED

Republicans have always said that when they gained control in Congress, they would work to overturn Roe v. Wade and here they are, cashing in on that promise one state at a time. So far, Alabama, Arkansas, Georgia, Kentucky, Missouri, and Ohio have all passed incredibly restrictive laws on abortions, making it illegal for women… END_OF_DOCUMENT_TOKEN_TO_BE_REPLACED

If you’re on Snapchat, then you’ve probably played around with (and were likely horrified by) their filter gender swap filters. While you’re probably using these filters to send hilarious pics to your friends, some guys using them to create Tinder profiles. What likely started out as a joke has quickly evolved, and these guys are… END_OF_DOCUMENT_TOKEN_TO_BE_REPLACED

“Milkshaking” is a hilarious trend in Britain where a milkshake is thrown at and ideally lands on a far-right politician or activist. The point of this nonviolence protest is to humiliate them without causing injury. Physical injury at least. There’s no doubt that milkshaking has led to a few bruised egos. Not only is this… END_OF_DOCUMENT_TOKEN_TO_BE_REPLACED