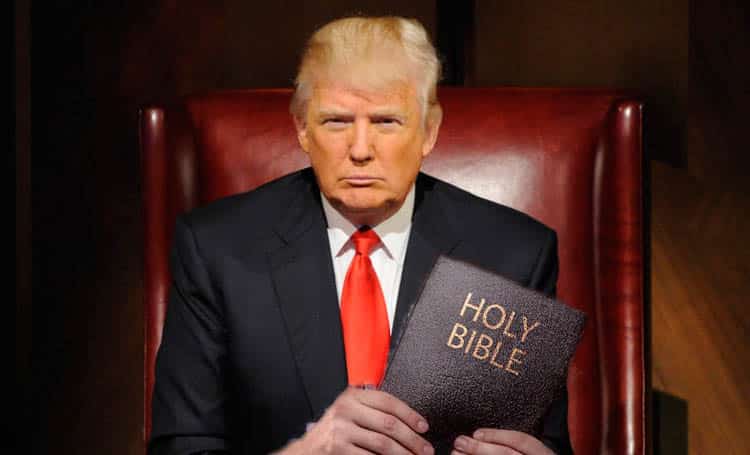 Have you heard? The Bible is Trump’s favorite book! He has even said it’s better than anything he has ever written, which is quite the statement coming from a man with an ego larger than the table at The Last Supper. The president admires The Bible so much that he recently announced that he’s all for pushing Bible studies on public school students. It would seem that if Trump gets his way, Jewish, Muslim, and atheist students will either be forced to sit through a class that doesn’t adhere to their beliefs or to go to private school. Or maybe we can just all send the kids to religious classes after school and leave the Godly education to the professionals. Here’s a look at some of the other subjects Trump will likely be into the school curriculum.

This class will show evidence that the Earth is actually flat rather than a sphere, despite what satellite photos show and NASA claims. Lessons will include taking walks outside across flat land, starring up at the flat clouds, and boat trips toward the end of the Earth. The class will also cover conspiracy theories throughout history that led to the belief that the world was ever round in the first place.

We all know that climate change is a hoax, but this class will cover the evidence that proves this. The curriculum includes readings from Trump’s Twitter feed, pinpointing areas throughout the United States that still receive snow, and mocking scientists. Students can expect field trips to locals zoos to show that animals are not going extinct as well as trips to frozen ponds to collect data proving global warming isn’t real. Hope you don’t fall through!

Fake news has been a long-standing issue throughout American history. The curriculum will cover everything from who really discovered America and how Native Americans were never harmed in the process to the Russian investigation and how it benefited the Democratic party. Lessons will teach students how to recognize fake news simply by looking at the news source. If it was written by a liberal, then it’s DEFINITELY fake news. If it’s on FOX News, then it must be true.

History Of The War On Men

Men have always been oppressed. This class covers all of the social injustices men have suffered from throughout history, specifically white men. It covers the limited rights men had throughout history that forced them to go to work every day, to vote for their political leaders, and even serve in politics if called upon. Lessons will also cover the recent witch hunt where men were victimized for paying attention to women and complimenting their figures in the #MeToo debacle. Those who succeed in the class are often invited to join the men’s movement better known as white supremacy.

The Blood Test, The Swab Test, and The Saliva Test      Essentially, there are three general types of COVID-19 testing produced so far. One is the rapid test, the second is the saliva test and the other is the swab test. The rapid test (also known as the anti-body test) uses blood samples. The swab test… END_OF_DOCUMENT_TOKEN_TO_BE_REPLACED

The COVID-19 pandemic is one of the biggest modern pandemics known in history. Currently, there are more than five million confirmed cases in the world, with a total of 333,000 deaths. A total of 1.6 million of these confirmed cases are in the US alone. The world is currently in a race of finding a… END_OF_DOCUMENT_TOKEN_TO_BE_REPLACED

Despite concrete data and research, people’s opinions will always be diverse when it comes to a variety of topics including religion, politics, gender, and more. Denial is a common reaction to many important discussions and serious world events. The COVID-19 pandemic does not differ from any issues and is subject to opinions from critiques all… END_OF_DOCUMENT_TOKEN_TO_BE_REPLACED

Back in January, when the Wuhan, China coronavirus broke out, it didn’t make it to the front page of newspapers, in print or virtual form. Today, January feels like a lifetime away. Like it or not, people around the world have adapted to the new normal – staying at home, frequent hand washing, and social… END_OF_DOCUMENT_TOKEN_TO_BE_REPLACED

Since the beginning of the year 2020, the whole world has been stupefied by the rapid spread of a deadly coronavirus known as COVID-19. World superpowers in the West were unable to prevent the virus from reaching their borders. Because of this fact, the novel coronavirus COVID-19 became a world-wide pandemic no less than three… END_OF_DOCUMENT_TOKEN_TO_BE_REPLACED

For months since the start of 2020, the attention of the world has focused on immediate response efforts to contain and combat the novel coronavirus, also known as COVID-19. The deadly virus has pushed millions of people into isolation.  This kept people in their homes for weeks and months away from their work, their friends,… END_OF_DOCUMENT_TOKEN_TO_BE_REPLACED