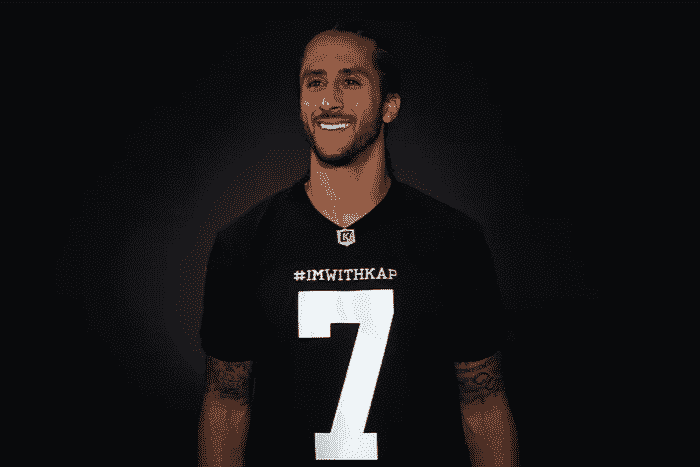 Not everyone enjoyed last weekend’s Super Bowl game many chose to boycott the event in support of Colin Kaepernick. The former quarterback has been mistreated, suffering at the hands of racism for merely choosing to kneel in protest of police brutality and social injustice during the National Anthem. Kaepernick hasn’t been signed to another team since the San Francisco 49ers dropped him, and many celebrities have supported him from the start.

Not only did several entertainers refuse offers to perform during a halftime show, but several hours before the game, #ImWithKap started trending. The hashtag was used by anyone boycotting the game in support of Kaepernick and what he stands for. Celebrities flooded their social media pages with #ImWithKap images, and these are the posts you just can’t miss.

Nick Cannon took to Twitter on Sunday morning to not only show that he was boycotting the game but that he supports Kaepernick’s cause as well. Aligned with the #ImWithKap hashtag was the #7Challenge that invited people to donate $7 to KnowYourRightsCamp.com. The number 7 represents Kaepernick’s football jersey, but likely people chose to donate a bit more. Know Your Rights Camp educates youth on a number of things including how to “interact with law enforcement in various scenarios.”

Rapper Common shared a few #ImWithKap posts alongside political activist Dr. Angela Davis and the results are just epic. Davis is wearing a Kaepernick jersey that displays the hashtag while Common’s post shares one of her quotes:

Zendaya didn’t even have to create her #ImWithKap post this year. She just retweeted her original post from 2017 and dropped the mic.

Director and producer Ava DuVernay addressed more than just NFL’s issue with Kaepernick, but also their lack of concern for player’s health. Likely this is a dig at the safety issues players have to deal with at the professional level. While they’re highly paid, they often spend the rest of their lives with physical and mental health issues.

Other athletes also chimed in on Super Bowl Sunday. Professional basketball player Stephen Curry may not have used the #ImWithKap hashtag, but he shared a photo of him wearing Kaepernick’s jersey. The only thing that would make this picture more adorable would be a matching onesie.

If you don’t know who Mari is, get to know her. Known as Little Miss Flint, is a young activist who is best known for taking on Flint’s water crisis. That doesn’t mean she doesn’t choose to get involved in other political issues as well. Here she is speaking out against police brutality in her Kaepernick jersey, and she hasn’t even gotten into middle school yet. This just might be enough evidence to confirm there’s still hope for future generations!

Gift-giving isn’t just a seasonal affair between friends, families and acquaintances. The art of gift-giving is also conducted on a national scale with countries often sending each other big, weird and expensive gifts. Experts in all things gifts, Vanilla Reindeer put together some examples of these expensive and odd gifts that have been shared between… END_OF_DOCUMENT_TOKEN_TO_BE_REPLACED

There are lots of ways you can make Pres. Trump feel welcome: you can offer him coffee, or mow a penis into a field for him to view as his plane lands. The willie in question has been chopped by Born Eco ahead of the arrival of President Trump, who visited the UK Monday for… END_OF_DOCUMENT_TOKEN_TO_BE_REPLACED

The year isn’t even halfway over, yet Donald Trump has managed to make a fool of himself and our country countless times. From inviting the national college football champions, the Clemson Tigers, all the way to the White House for some McDonald’s to his to the dreaded results of Mueller’s investigation, it has been one… END_OF_DOCUMENT_TOKEN_TO_BE_REPLACED

Republicans have always said that when they gained control in Congress, they would work to overturn Roe v. Wade and here they are, cashing in on that promise one state at a time. So far, Alabama, Arkansas, Georgia, Kentucky, Missouri, and Ohio have all passed incredibly restrictive laws on abortions, making it illegal for women… END_OF_DOCUMENT_TOKEN_TO_BE_REPLACED

If you’re on Snapchat, then you’ve probably played around with (and were likely horrified by) their filter gender swap filters. While you’re probably using these filters to send hilarious pics to your friends, some guys using them to create Tinder profiles. What likely started out as a joke has quickly evolved, and these guys are… END_OF_DOCUMENT_TOKEN_TO_BE_REPLACED

“Milkshaking” is a hilarious trend in Britain where a milkshake is thrown at and ideally lands on a far-right politician or activist. The point of this nonviolence protest is to humiliate them without causing injury. Physical injury at least. There’s no doubt that milkshaking has led to a few bruised egos. Not only is this… END_OF_DOCUMENT_TOKEN_TO_BE_REPLACED