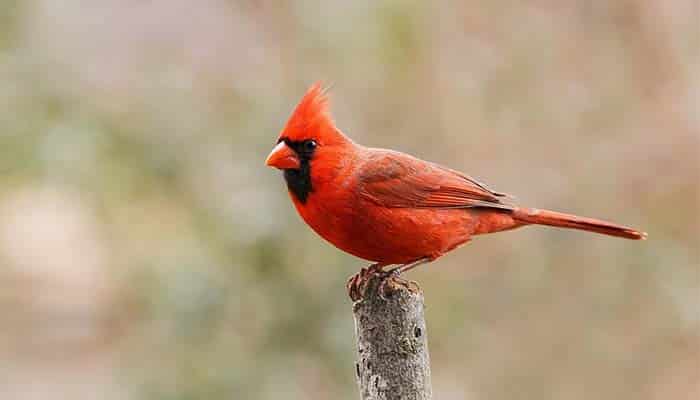 If anyone ever tries to tell you that being intersex isn’t a thing, show them this bird.

A couple in Erie, Pennsylvania made an amazing discovery while bird-watching in their backyard a few weeks ago.

They came across a cardinal unlike any other, with both male and female traits split completely down the middle.

Known as a bilateral gynandromorph or chimera, the incredibly rare specimen featured the bright red coloring typical to male cardinals on one side, with the more lowkey blonde/brown shade attributed to females on the other.

Captured on film by Pennsylvania natives Shirley and Jeffrey Caldwell, the once in a lifetime spot was found in a dawn redwood not far from the couple’s home.

This might make some peoples heads explode. "…known as a bilateral gynandromorph … Half its body is male & the other half is female … a genuine male/female chimera…" https://t.co/HPHgO45YVf #Ornithology #birding #birds #pajeros #oiseaux #GodIsGreat #Science #Biology

“Never did we ever think we would see something like this in all the years we’ve been feeding,” Shirley told National Geographic.

Bilateral gynadromorphism is caused by double fertilization, when a female egg cell, that developed with two nuclei, is fertilized with two seperate sperm.

The end result is a specimen like the cardinal, which resembles a male and female stitched together in the centre.

Daniel Hooper, a postdoctoral fellow at the Cornell Lab, said: “This remarkable bird is a genuine male/female chimera.”

“Cardinals are one of the most well-known sexually dimorphic birds in North America—their bright red plumage in males is iconic—so people easily notice when they look different.”

World’s Oldest Living Bird Proves She Still Has It; Lays Another Egg

Drunk Birds Fly ‘Under The Influence’; Crash Into Windows And Cause Panic

Gift-giving isn’t just a seasonal affair between friends, families and acquaintances. The art of gift-giving is also conducted on a national scale with countries often sending each other big, weird and expensive gifts. Experts in all things gifts, Vanilla Reindeer put together some examples of these expensive and odd gifts that have been shared between… END_OF_DOCUMENT_TOKEN_TO_BE_REPLACED

There are lots of ways you can make Pres. Trump feel welcome: you can offer him coffee, or mow a penis into a field for him to view as his plane lands. The willie in question has been chopped by Born Eco ahead of the arrival of President Trump, who visited the UK Monday for… END_OF_DOCUMENT_TOKEN_TO_BE_REPLACED

The year isn’t even halfway over, yet Donald Trump has managed to make a fool of himself and our country countless times. From inviting the national college football champions, the Clemson Tigers, all the way to the White House for some McDonald’s to his to the dreaded results of Mueller’s investigation, it has been one… END_OF_DOCUMENT_TOKEN_TO_BE_REPLACED

Republicans have always said that when they gained control in Congress, they would work to overturn Roe v. Wade and here they are, cashing in on that promise one state at a time. So far, Alabama, Arkansas, Georgia, Kentucky, Missouri, and Ohio have all passed incredibly restrictive laws on abortions, making it illegal for women… END_OF_DOCUMENT_TOKEN_TO_BE_REPLACED

If you’re on Snapchat, then you’ve probably played around with (and were likely horrified by) their filter gender swap filters. While you’re probably using these filters to send hilarious pics to your friends, some guys using them to create Tinder profiles. What likely started out as a joke has quickly evolved, and these guys are… END_OF_DOCUMENT_TOKEN_TO_BE_REPLACED

“Milkshaking” is a hilarious trend in Britain where a milkshake is thrown at and ideally lands on a far-right politician or activist. The point of this nonviolence protest is to humiliate them without causing injury. Physical injury at least. There’s no doubt that milkshaking has led to a few bruised egos. Not only is this… END_OF_DOCUMENT_TOKEN_TO_BE_REPLACED