Bill Cosby Is Not ‘Tired,’ Contrary To Your Facebook Feed

No, Bill Cosby isn’t “tired” of the takers in this country eating up his income.

Facebook is a wonderful tool that brings people together. It’s also the occasional and unwitting host to seemingly improbable, densely partisan and uniquely shareable sound bite posts in which celebrities voice their profound political views on a variety of current cultural issues.

Remember when email was a new thing and you’d get constant chain messages from that one person in your contacts? For not forwarding, these emails would threaten you with your inevitable doom or manipulatively suggest that you don’t care about God or country, etc. These same messages pop up on Facebook from time to time under a caption like “I bet no one will share this” or some such nonsense.

I’m here to put a stop to these shenanigans.

The one on my mind right now comes from comedian Bill Cosby. It’s been shared by a number of my friends on Facebook over the past few days. The story goes that the Cos wrote this opinion piece in which he claims he’s “tired of being told that I have to ‘spread the wealth around’ to people who don’t have my work ethic,” and that he’s “tired of being told the government will take the money I earned, by force if necessary, and give it to people too lazy or stupid to earn it.” 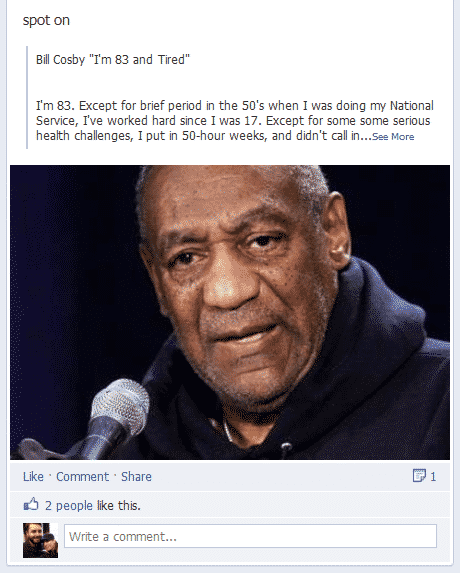 Thanks to the wonderful tool that is Snopes, a website which you should all bookmark in the event of a questionable viral hoax, this Bill Cosby “I’m tired” post has been put to rest, but here’s a quick reminder:

A lot of people don’t realize that some of these posts, however timely, are actually quite dated, as well. The Bill Cosby “I’m tired” piece has been circulated since August of 2011.

Think before you share, and do a little homework so you can flame your naive friends for posting such rot. As Cosby says, “If you get the email, it’s time to hit DELETE.”