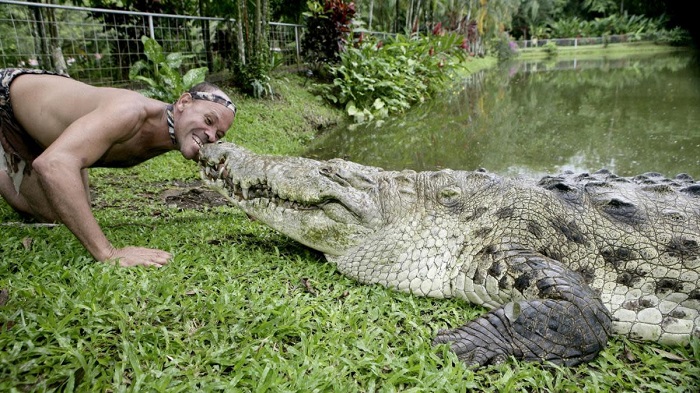 When it comes to protecting our young, human beings are no different than the rest of the animal kingdom. That is, parents will often fight to the death in order keep their children alive using any means necessary. One man even had to save his son using the only sharp weapon he had– his teeth, to fight a crocodile, a very hungry crocodile.

The heroic incident happened in the Philippines in the provincial town of Balabac, Palawan at around 6 p.m. on Friday. A boy name Diego Abdulhasan and his younger brother were enjoying an evening river dip when they got ambushed by a hungry crocodile. The croc was after Diego, bit his arm tightly and wouldn’t let go of its prey. Hence, Diego’s younger brother ran off to fetch help from their parents.

Immediately, Tejada, Diego’s father came running to his rescue. Tejada was forced to fight a crocodile with the only weapon he had, initially by hitting the beast with his fists. This did not work, so Tejada resorted to repeatedly biting the soft parts of the crocodile before it dragged his son to the river.

This lasted for several minutes throughout the painful cries of his son until the crocodile was all bloodied and injured as well. Eventually, the hungry crocodile released Diego and swam off. Due to Tejada’s bravery, Diego only suffered crocodile bites and did not lose anything irreplaceable during the attack:

The boy was then immediately taken to a nearby hospital for his injuries, which, while not lethal enough to outright kill Diego, were still quite devastating. It would probably require more than a dozen stitches, a skin graft too, perhaps:

Thanks to his father’s bravery (and teeth), Diego is still alive. Someone give him the father of the year award, it’s not often you get to fight a crocodile and win.

Wild Crocodile Wanders Into Someone’s Backyard, Gets Cuddled By Homeowner

Recent trends have reported that K-pop fans in the US are getting mixed in with current issues in politics. K-pop fan communities are using online platforms to rally up and protest against racism in the United States. In support of the #BlackLivesMatter movement, the online K-pop community has come together in protest. Never has it… END_OF_DOCUMENT_TOKEN_TO_BE_REPLACED

Just this week, lawmakers approved a bill establishing the District of Columbia (D.C.) as the 51st state of the United States of America. This is after multiple calls and protests from the citizens to finally consider D.C. as a state.  However, the bill is not out of the woods yet as it faces multiple oppositions… END_OF_DOCUMENT_TOKEN_TO_BE_REPLACED