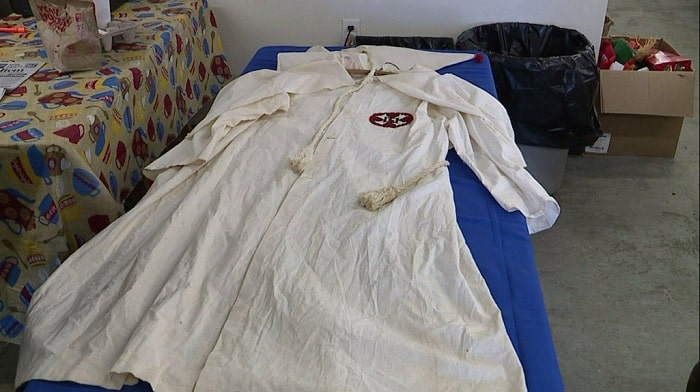 Racists are everywhere in the world no matter what, one of them is even a president. That’s probably why racists have come crawling out of the woodwork recently too, can’t discredit that newfound strength and rallying call they just got. Hence, that is probably why someone bought a KKK robe at an auction for $3,000, inciting outrage from locals.

The incident happened in Snyder County, Pennsylvania at the Beaver Springs Auction Center last Saturday. Auctioneer Dawn Miller explicitly stated that they don’t mean any harm at all when they put up “authentic” KKK robe and hood for auction. The robes were used by white supremacists to terrorize black people and jews back then.

At most, Dawn and her husband, Frank Miller estimated the said costume to sell for $750 with all the outcry it had generated from their town. However, both Dawn and everyone in the town was shocked that someone actually bid $3,000 for the white supremacist KKK robe.

It was, of course, from an anonymous bidder, which nevertheless exceeded the expectations of the locals. The sale even took place in a span of just two minutes. As such, they were angry at what just transpired. Some even compared the sale buying bricks from Auschwitz, which is an equally notorious racism icon.

“It’s just something that should not be sold,” said a local man as the KKK robe spread hatred and I wouldn’t want anybody to make any profit off of it.” Dawn, however, defended that the said KKK robe is a “historical item” hence why she didn’t call off the auction despite the controversy.

Now that the election results are almost final, we all want to ask what’s going to happen to Donald Trump after leaving the office? All US Presidents inevitably reach the point where they leave the White House.  Besides, the constitution states that all US Presidents are subject to a two-term limit. What do former presidents… END_OF_DOCUMENT_TOKEN_TO_BE_REPLACED

This is the first time in modern history that the US held presidential elections in the middle of a pandemic. In truth, the US elections may have overshadowed COVID-19 and the side effects are limitless. America is facing a tough crisis of discontentment with the current administration. An understandable case but a situation that may… END_OF_DOCUMENT_TOKEN_TO_BE_REPLACED

America’s political climate has been seeing records of changes over the past few decades. However, US election results record a list of surprising firsts for the first time in a long time. With the power of the youth overpowering the US election results, we see how differently they see the world. It shows how inclusivity… END_OF_DOCUMENT_TOKEN_TO_BE_REPLACED