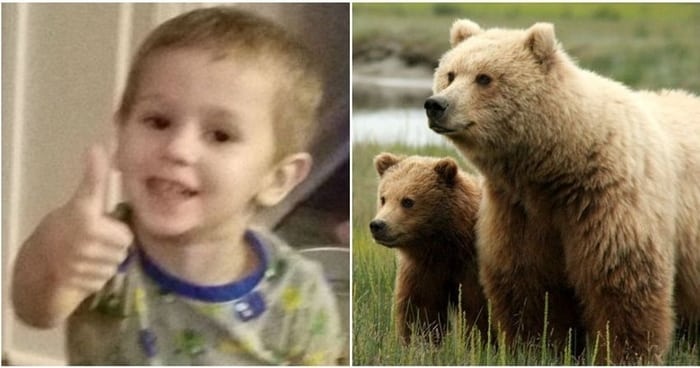 A three-year-old boy who earlier this month endured two days lost in the woods without winter gear, alleges he was protected by an amiable bear.

Casey Hathaway, from Ernul, North Carolina, last week strayed away from his grandmother’s property and got lost in the woods. Hathaway spent forty-eight hours alone in the wilderness, as the rain and wind were so bad various volunteers were turned away from the rescue/search party for their own safety.

A pinch of good luck ultimately saved Casey, as he roamed close enough to one of his grandmom’s neighbors for her to overhear his shrieks. A professional rescue/search team discovered him enmeshed in nearby thorn bushes.

While Casey had a few bruises and scrapes from his venture in the woods, he was generally in perfect health, which investigators equated to a miracle.

On a GoFundMe page formed by Casey’s grandmother, the family provided the untypical tale: “He told us that his best friend the bear was with him to help keep him safe,” they noted. “Thanks to God’s mercy he came home to us alive and well.”

“Casey is healthy, smiling and talking,” Casey’s aunt, Breanna, shared in a since deleted FB post. “He said he hung out with a bear for two days. God sent him a friend to keep him safe.”

County Sheriff Chip Hughes, confirmed the toddler’s story. “He didn’t say how he was able to survive and all that,” stated Hughes. “He did say he had a friend in the woods that was a bear that was with him.”

Recent trends have reported that K-pop fans in the US are getting mixed in with current issues in politics. K-pop fan communities are using online platforms to rally up and protest against racism in the United States. In support of the #BlackLivesMatter movement, the online K-pop community has come together in protest. Never has it… END_OF_DOCUMENT_TOKEN_TO_BE_REPLACED

Just this week, lawmakers approved a bill establishing the District of Columbia (D.C.) as the 51st state of the United States of America. This is after multiple calls and protests from the citizens to finally consider D.C. as a state.  However, the bill is not out of the woods yet as it faces multiple oppositions… END_OF_DOCUMENT_TOKEN_TO_BE_REPLACED