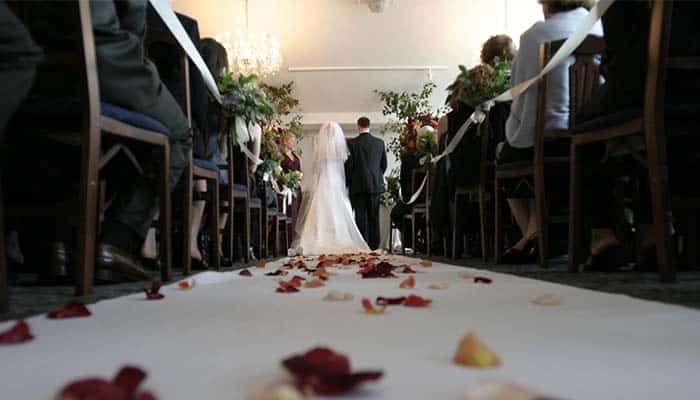 From dress codes based on guests’ weights, to expecting attendees to pay $1000 just to be allowed in, at this point we thought we’d heard it all.

But this latest Bridezilla tale to cause controversy literally takes the cake. A bride-to-be is being slammed in a vegan Facebook group for her choice of menu, but not for the reason you’re thinking.

Although members praised the couple’s all-vegan menu, the group were less enthused by their decision to ban all meat-eaters from the ceremony.

The furore began when an anonymous bride shared her annoyance at family members constantly trying to “guilt her” into letting them attend, before describing them as “murderers.” Apparently, the “no omnivores” rule has been in place from the start of the planning process, and she and the groom have no intention of changing it now.

In her post, the bride said: “When your ‘family’ tries to guilt trip you into letting them come to your fully vegan wedding, even though they’re omnivores.

“Just for some context, some family members were told they are not invited to my wedding because we don’t want to host murderers. Our wedding is supposed to be one of the happiest days of our lives.”

Unsurprisingly, members of the group were not impressed by how the bride is treating her family, or her seeming attempt to gain sympathy from fellow vegans.

One said: “As a vegan, this is messed up, … you can’t go around calling your family murderers!”

While another commented: “She is out of her mind. I’d be happy to cut her off of my life if I were the family.”

Some suggested that by banning her family, the bride was missing out on the chance to introduce them to vegan food.

“Wouldn’t this be a prime opportunity to prove that vegan food can be just as delicious as omnivore food anyway?” one asked.

While another added: “This would have been a great way for her to show off her vegan lifestyle and prove the food is delicious.”

In response to the ruthless reaction to her post, the bride shared more details. Allegedly, the bride and her family have long-argued over her choice of lifestyle, and the decision to not invite them wasn’t made lightly.

She continued: “They have consistently attacked me and my partner just for being vegan.

“When I broke the news to them, all I got was attacked because I don’t want the weight of having people that still kill animals (the very beings we are trying to protect) at my wedding on my conscience.

“I’m sorry if that makes me ‘rude’ or a ‘b**ch’ because I’m not compromising the ethics that I share with everyone here.”

The post has since gone viral, and in a twist that could only happen on social media, a relative of the bride has commented on one of the shared posts.

“What’s the most f***ed up thing you’ve ever experienced?” the family member wrote. “I just got un-invited to a wedding that I was meant to be a bridesmaid for, because I’m not vegan.

“To make matters worse, this girl is FAMILY who I’ve grown up with my whole life.”

The Blood Test, The Swab Test, and The Saliva Test      Essentially, there are three general types of COVID-19 testing produced so far. One is the rapid test, the second is the saliva test and the other is the swab test. The rapid test (also known as the anti-body test) uses blood samples. The swab test… END_OF_DOCUMENT_TOKEN_TO_BE_REPLACED

The COVID-19 pandemic is one of the biggest modern pandemics known in history. Currently, there are more than five million confirmed cases in the world, with a total of 333,000 deaths. A total of 1.6 million of these confirmed cases are in the US alone. The world is currently in a race of finding a… END_OF_DOCUMENT_TOKEN_TO_BE_REPLACED

Despite concrete data and research, people’s opinions will always be diverse when it comes to a variety of topics including religion, politics, gender, and more. Denial is a common reaction to many important discussions and serious world events. The COVID-19 pandemic does not differ from any issues and is subject to opinions from critiques all… END_OF_DOCUMENT_TOKEN_TO_BE_REPLACED

Back in January, when the Wuhan, China coronavirus broke out, it didn’t make it to the front page of newspapers, in print or virtual form. Today, January feels like a lifetime away. Like it or not, people around the world have adapted to the new normal – staying at home, frequent hand washing, and social… END_OF_DOCUMENT_TOKEN_TO_BE_REPLACED

Since the beginning of the year 2020, the whole world has been stupefied by the rapid spread of a deadly coronavirus known as COVID-19. World superpowers in the West were unable to prevent the virus from reaching their borders. Because of this fact, the novel coronavirus COVID-19 became a world-wide pandemic no less than three… END_OF_DOCUMENT_TOKEN_TO_BE_REPLACED

For months since the start of 2020, the attention of the world has focused on immediate response efforts to contain and combat the novel coronavirus, also known as COVID-19. The deadly virus has pushed millions of people into isolation.  This kept people in their homes for weeks and months away from their work, their friends,… END_OF_DOCUMENT_TOKEN_TO_BE_REPLACED