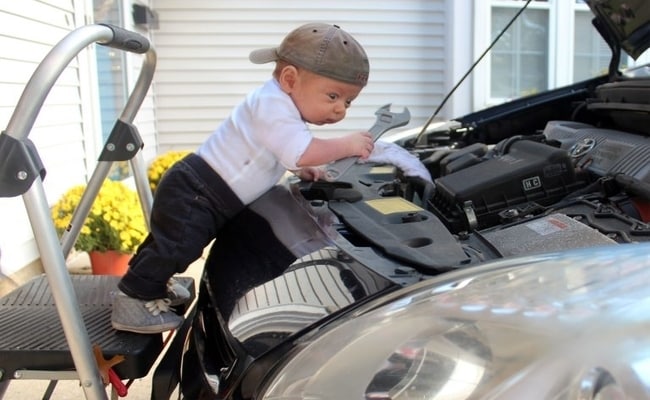 A dad has exhibited a photoshoot with his newborn son which show him conducting ‘manly’ duties – including chopping wood, fishing and lifting weights.

In an effort to produce an ‘untypical’ newborn photoshoot, father-of-two Matt MacMillan mustered up a distinctive project that witnessed son Ryan, now six months, spurred into an assortment of banal situations.

MacMillan, 31, from New Jersey, started photographing Ryan when he was only two months old. The proud dad stated Ryan being born premature (weighing less than 3lbs [1.3kg]) is what inspired the endeavor, after Matt and his spouse Alyssa, 32, joked that the baby wasn’t premature but merely ‘advanced’ for his age – and thereby could take on ‘adult tasks’ featured in his photoshoot.

“Ryan was born nine weeks premature and was in hospital for the first six weeks of his life,” said Matt. “My wife and I like to joke that he is not premature, but just advanced, which is where this idea stemmed from. She helped me with everything. One of us would hold him in different positions, and then I’d just edit us out, so it looks like he is doing it all by himself. I find normal newborn photographs somewhat boring, so I thought I’d spice it up a bit this way.”

The hysterical pics have since gone viral on the web, accumulating roughly 100,000 shares in less than 24 hours.

“I just tried to brainstorm different stereotypically manly activities. It was really fun,” Matt added. “He is a really good baby to work with. He is always laughing and smiling. It was funny, because I’ve received some angry comments from people who actually think that it’s real. They’re asking me how I could put my baby in danger like that. I had to laugh.

“I mean, there is no way a baby could lift an axe that size or go fishing or carve a turkey. He couldn’t even walk. They’re all completely photoshopped. There was no danger whatsoever.”

Would You Drink Baby Poop? Well, You Should..

The Blood Test, The Swab Test, and The Saliva Test      Essentially, there are three general types of COVID-19 testing produced so far. One is the rapid test, the second is the saliva test and the other is the swab test. The rapid test (also known as the anti-body test) uses blood samples. The swab test… END_OF_DOCUMENT_TOKEN_TO_BE_REPLACED

The COVID-19 pandemic is one of the biggest modern pandemics known in history. Currently, there are more than five million confirmed cases in the world, with a total of 333,000 deaths. A total of 1.6 million of these confirmed cases are in the US alone. The world is currently in a race of finding a… END_OF_DOCUMENT_TOKEN_TO_BE_REPLACED

Despite concrete data and research, people’s opinions will always be diverse when it comes to a variety of topics including religion, politics, gender, and more. Denial is a common reaction to many important discussions and serious world events. The COVID-19 pandemic does not differ from any issues and is subject to opinions from critiques all… END_OF_DOCUMENT_TOKEN_TO_BE_REPLACED

Back in January, when the Wuhan, China coronavirus broke out, it didn’t make it to the front page of newspapers, in print or virtual form. Today, January feels like a lifetime away. Like it or not, people around the world have adapted to the new normal – staying at home, frequent hand washing, and social… END_OF_DOCUMENT_TOKEN_TO_BE_REPLACED

Since the beginning of the year 2020, the whole world has been stupefied by the rapid spread of a deadly coronavirus known as COVID-19. World superpowers in the West were unable to prevent the virus from reaching their borders. Because of this fact, the novel coronavirus COVID-19 became a world-wide pandemic no less than three… END_OF_DOCUMENT_TOKEN_TO_BE_REPLACED

For months since the start of 2020, the attention of the world has focused on immediate response efforts to contain and combat the novel coronavirus, also known as COVID-19. The deadly virus has pushed millions of people into isolation.  This kept people in their homes for weeks and months away from their work, their friends,… END_OF_DOCUMENT_TOKEN_TO_BE_REPLACED