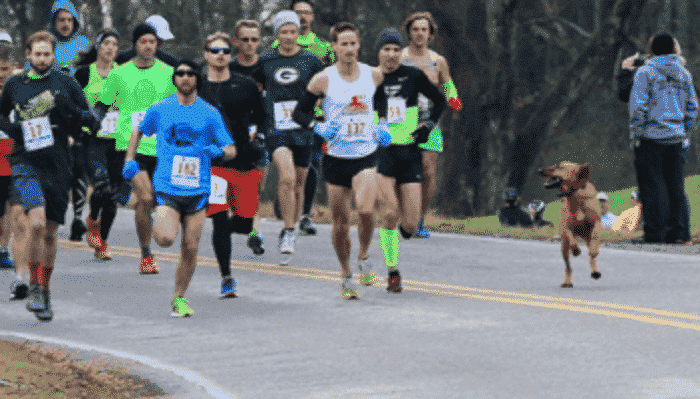 Don’t you just hate it when you work hard to build stamina for a marathon only to have a dog beat you at it? Well, to be honest, they do have the advantage of four legs instead of two so they will always win. That much is almost true for one good girl who just went out to have a pee but ended up joining a half marathon and finishing 7th.

One cold morning in Canada, dozens of endurance runners were poised to compete with one another in the 13.5-mile Elkmont Trackless Train Half Marathon. Suddenly, out of nowhere, an unlikely competitor bolted straight for the track and joined the race as soon as it began; it was a lone bloodhound dog and she wasn’t afraid to go ruff:

An hour and a half later, after the dust had finally settled, the determined bloodhound beat all but six of the humans who joined the half marathon. Of course, she was rewarded with a medal having finished at 7th place despite having no warm-up or training. Throughout the race, she was also able to keep up with the marathon leaders. Just who is this good girl?

Turns out, her name was Ludivine, local pet, two-and-a-half years old and ready to make humans eat her dust. What’s even more embarrassing for the humans Ludivine defeated was that his mom, April Hamlin, just let her out for a bit so she could pee… Yes, a dog who only went to pee defeated nearly everyone in a half marathon. By the way, she was even stopping to play with local cows and to do some sniffing.

“All I did was open the door, and she ran the race on her own accord. My first reaction was that I was embarrassed and worried that she had possibly gotten in the way of the other runners. She’s laid back and friendly, so I can’t believe she ran the whole half marathon because she’s actually really lazy,” claimed April.

Okay, that’s enough insult to injury. She is now an official mascot of Elkmont Trackless Train. Thank you, Ludivine for reminding us that dogs will inherit the Earth in the event of an apocalypse