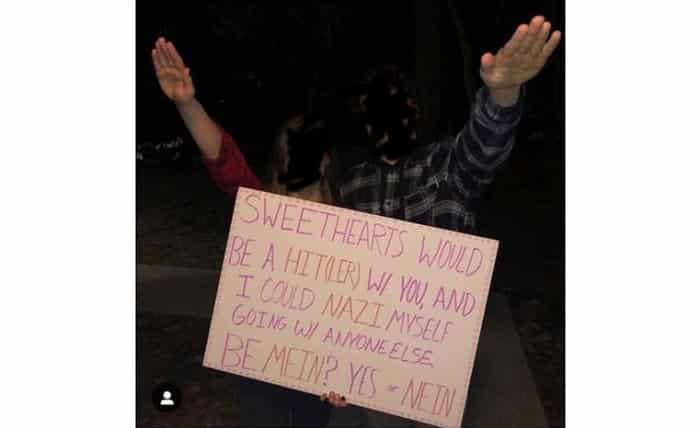 Prom nights and school dances are probably the most important thing to teenagers, especially upon their first contact with raging hormones. So it’s understandable that some of them go crazy just to have a prom date. However, two high school students took things a little too far(-right) with their Nazi-inspired dance invitation, complete with a Nazi salute.

No Nein GIF from No GIFs

In case you’re having problems with images, here’s what their dance invitation says: “Sweethearts would be a Hit() w/ you, and I could Nazi myself going w/ anyone else. Be Mein? Yes or Nein?” To top that bitter cake with a rotten cherry, the two were also doing the “Heil Hitler” salute and were really committed to their propaganda-fueled quest for prom partners.

However, to make each other seem a little less racist (yes, really), one of the students who posed in the photo and posted it online also added the caption saying, “Also I would like to state that I am not anti-Semitic in any way. I hate all races equally.”

Soon after (but not soon enough), the school officials caught wind of the anti-Semitic dance invitation and the students deleted the post. The school officials then assured the local community that in no way the anti-Semitic gesture aligns with their school values. It is not known whether the students who did the dance invitation were punished for their misdeeds.

Seems it was just like yesterday when we all fought over and hoarded HEAPS of toilet paper for no reason at all. All the memories are rushing in as the US suffers from a gas shortage. As expected, gas shortage memes are everywhere to bring light to our currently sad situation. Along the US east… END_OF_DOCUMENT_TOKEN_TO_BE_REPLACED

Israel’s Iron Dome has protected the country against missile attacks for years. The Iron Dome in Israel is the biggest of its kind in the world. No other countries in the world use the same air defense system, meaning it is one of a kind. The tension between Israel and Gaza has been going on… END_OF_DOCUMENT_TOKEN_TO_BE_REPLACED

The world is devastated by the news that Britain’s Prince Philip, the Duke of Edinburgh, has died at the age of 99. Palace media confirms that the Duke has expired mid-day today, April 9th. The announcement did not contain any specifics on the cause of death. The United Kingdom will enter a state of national… END_OF_DOCUMENT_TOKEN_TO_BE_REPLACED