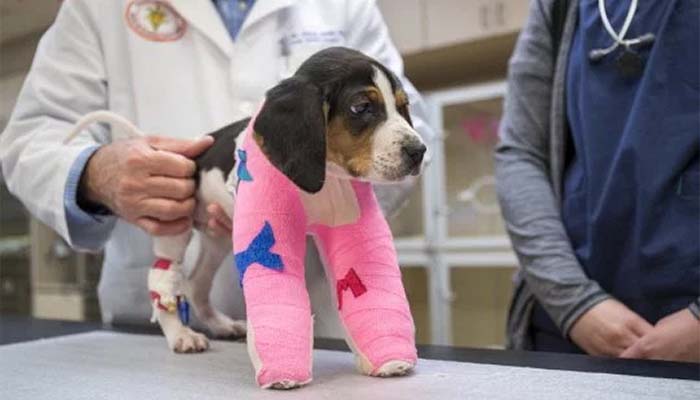 From the “Nostradamus of the Balkans” predicting multiple Earth-shattering events (including the assassination of Vladmir Putin and economic collapse in Europe) to tonight’s Super Blood Moon supposedly foretelling the end of the world, even the most skeptical amongst us are like, “wtf January?”

Well, here’s something that will restore your faith in humanity this dark, depressing new year. A puppy born with his paws back to front will finally have the chance to walk thanks to a pioneering new surgery.

Milo the mongrel was just five-weeks-old when his owner dumped him at the local animal shelter. He was abandoned due to his congenital elbow luxation, meaning the pup was born with his paws the wrong way around.

Fortunately, the caring staff at Oliver and Friends Farm Rescue and Sanctuary in Luther, Oklahoma, raised $4,000 for Milo’s operation, giving the little guy a second chance at life.

Before the surgery, Milo couldn’t walk at all, with the team describing his attempts as an”inefficient and seemingly uncomfortable army crawl.”

But now, the pup can walk properly, with his first try caught on video for all to enjoy.

Dr Erik Clary, from Oklahoma State University’s Center for Veterinary Health Sciences, said: “With both elbows out of joint, Milo was unable to walk. Try as he might, the best he could do was an inefficient and seemingly uncomfortable army crawl.”

The complicated procedure took five specialists four hours to undertake, with Dr Clary, Associate Professor of Small Animal Surgery, saying he’d only seen three cases like Milo’s in his 27 years as a vet.

“Many people will never see a case of it in their whole career,” he explained.

Still, Dr Clary believes Milo has a strong chance of making a full recovery. “We had to put pins in each of his elbows, so it’s going to take a while for him to heal and be mobile,” he said.

“We have to change the casts once a week because he’s growing so fast, but so far so good. It’s going to be another couple of weeks until I can take the splints out.

“He stands a good chance. I felt encouraged at his last bandage change that he was progressing well. He has a good shot.”

Unsurprisingly, Milo has accumulated a devoted fanbase, both at the animal hospital and online.

Dr Clary continued: “Milo’s a very sweet and resilient dog. There are dozens of people going to check up on every day.

“He had no shortage of student and staff volunteers willing to hold him and help him get outside when needed.”

Want to aid Milo’s recovery? You can make a donation towards his ongoing medical care on Oliver and Friends Farm Rescue and Sanctuary’s website.

Gift-giving isn’t just a seasonal affair between friends, families and acquaintances. The art of gift-giving is also conducted on a national scale with countries often sending each other big, weird and expensive gifts. Experts in all things gifts, Vanilla Reindeer put together some examples of these expensive and odd gifts that have been shared between… END_OF_DOCUMENT_TOKEN_TO_BE_REPLACED

There are lots of ways you can make Pres. Trump feel welcome: you can offer him coffee, or mow a penis into a field for him to view as his plane lands. The willie in question has been chopped by Born Eco ahead of the arrival of President Trump, who visited the UK Monday for… END_OF_DOCUMENT_TOKEN_TO_BE_REPLACED

The year isn’t even halfway over, yet Donald Trump has managed to make a fool of himself and our country countless times. From inviting the national college football champions, the Clemson Tigers, all the way to the White House for some McDonald’s to his to the dreaded results of Mueller’s investigation, it has been one… END_OF_DOCUMENT_TOKEN_TO_BE_REPLACED

Republicans have always said that when they gained control in Congress, they would work to overturn Roe v. Wade and here they are, cashing in on that promise one state at a time. So far, Alabama, Arkansas, Georgia, Kentucky, Missouri, and Ohio have all passed incredibly restrictive laws on abortions, making it illegal for women… END_OF_DOCUMENT_TOKEN_TO_BE_REPLACED

If you’re on Snapchat, then you’ve probably played around with (and were likely horrified by) their filter gender swap filters. While you’re probably using these filters to send hilarious pics to your friends, some guys using them to create Tinder profiles. What likely started out as a joke has quickly evolved, and these guys are… END_OF_DOCUMENT_TOKEN_TO_BE_REPLACED

“Milkshaking” is a hilarious trend in Britain where a milkshake is thrown at and ideally lands on a far-right politician or activist. The point of this nonviolence protest is to humiliate them without causing injury. Physical injury at least. There’s no doubt that milkshaking has led to a few bruised egos. Not only is this… END_OF_DOCUMENT_TOKEN_TO_BE_REPLACED