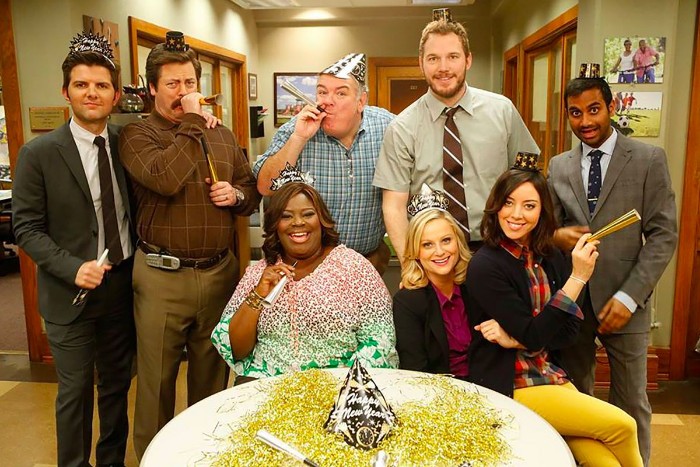 “Parks and Recreation” not only one of the greatest shows of all time, but it’s incredibly relevant to today’s political climate. It’s shocking how many scenes seem to predict Trump’s America even though the show started airing nearly ten ago. Leslie Knope may have wise beyond her years.

Let’s face it, government employees aren’t exactly working hard these days. In fact, it seems that even when the government isn’t shut down those who get paid the most rarely put it a hard days work. At least Ron Swanson owned up to it.

Isn’t sexism old news already? Men are just starting to get used to seeing women in offices rather than in kitchens, how could they possibly handle seeing them take on a political office position? If anyone is frail, it’s men who are threatened by strong and independent women.

This is probably how all of the furloughed government employees are answering the phones these days. It seems fair since they’re being forced to work without even a glimpse of a paycheck. A few more weeks of the government shutdown and they might not answer the phones at all. Donald Trump himself will have to get the calls forwarded to the Oval Office.

After Trump’s shutdown finally comes to an end, or should I say if it ever comes to an end, the only kinds of people who will be interested in working for the government will be the Rons and Toms of the world. Why dedicate time to a job who can stop paying you overnight and still force you to come to work? Likely we’ll see a large number of resignation letters coming out of the federal government sectors over the next few months.

5. Men’s Rights Is Nothing

Thought men’s rights was a thing? Well, according to Leslie Knope it’s definitely not. When men are forced to keep their nipples covered at all times, and judged on their appearance over their intelligence, and thought of as bitches for having an opinion, and can’t go on a date without the fear of being murdered, and so on and so forth, then these guys can talk about men’s rights. Until then, let’s focus on women’s equality!

After another month or two without a payday, this will be what every federal government employee says as they walk out the front door. Congress is still getting paid, so it’s not like they’re in a rush to get back to work. Trump’s threat to keep the government shut down for months or even years just might become our reality.

“Parks and Recreation” even managed to predict Trump’s space force. With all of those malls Bobby Newport put on Jupiter, it’s no wonder we need a space force. They’ll need to keep all of those aliens on shopping sprees with Chipotle cravings under control.

7 Americans Who Are Being Most Affected By The Government Shutdown

Trump Wants To Know How We Could Impeach Him, So We’ve Provided An Answer

Gift-giving isn’t just a seasonal affair between friends, families and acquaintances. The art of gift-giving is also conducted on a national scale with countries often sending each other big, weird and expensive gifts. Experts in all things gifts, Vanilla Reindeer put together some examples of these expensive and odd gifts that have been shared between… END_OF_DOCUMENT_TOKEN_TO_BE_REPLACED

There are lots of ways you can make Pres. Trump feel welcome: you can offer him coffee, or mow a penis into a field for him to view as his plane lands. The willie in question has been chopped by Born Eco ahead of the arrival of President Trump, who visited the UK Monday for… END_OF_DOCUMENT_TOKEN_TO_BE_REPLACED

The year isn’t even halfway over, yet Donald Trump has managed to make a fool of himself and our country countless times. From inviting the national college football champions, the Clemson Tigers, all the way to the White House for some McDonald’s to his to the dreaded results of Mueller’s investigation, it has been one… END_OF_DOCUMENT_TOKEN_TO_BE_REPLACED

Republicans have always said that when they gained control in Congress, they would work to overturn Roe v. Wade and here they are, cashing in on that promise one state at a time. So far, Alabama, Arkansas, Georgia, Kentucky, Missouri, and Ohio have all passed incredibly restrictive laws on abortions, making it illegal for women… END_OF_DOCUMENT_TOKEN_TO_BE_REPLACED

If you’re on Snapchat, then you’ve probably played around with (and were likely horrified by) their filter gender swap filters. While you’re probably using these filters to send hilarious pics to your friends, some guys using them to create Tinder profiles. What likely started out as a joke has quickly evolved, and these guys are… END_OF_DOCUMENT_TOKEN_TO_BE_REPLACED

“Milkshaking” is a hilarious trend in Britain where a milkshake is thrown at and ideally lands on a far-right politician or activist. The point of this nonviolence protest is to humiliate them without causing injury. Physical injury at least. There’s no doubt that milkshaking has led to a few bruised egos. Not only is this… END_OF_DOCUMENT_TOKEN_TO_BE_REPLACED