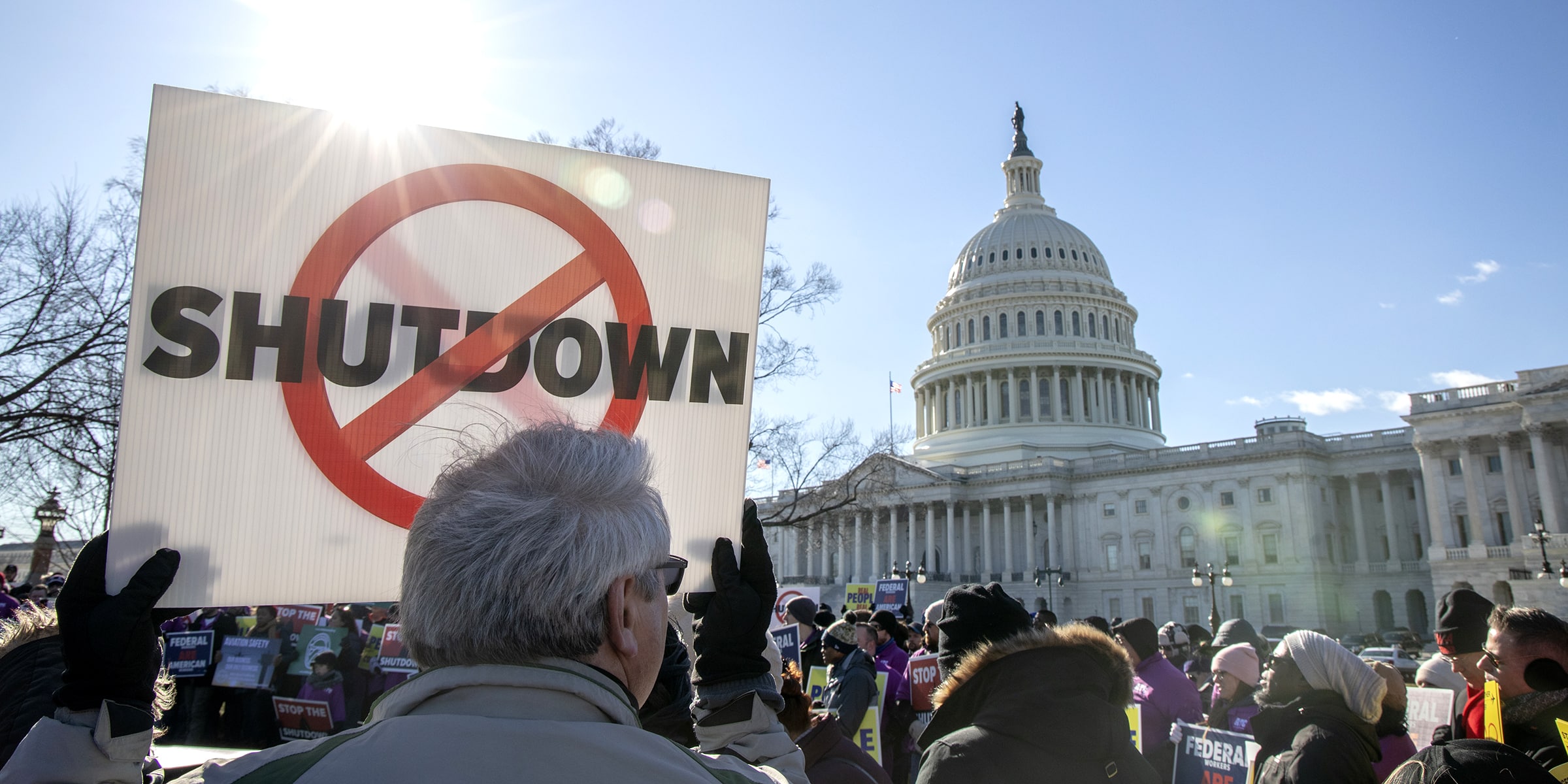 The government is STILL shut down, making it the longest shutdown in American history. People are going without paychecks, looking at homelessness, and suffering without government programs they’ve been depending on. As we approach the 26th day of Trump’s shutdown, more and more people are sharing their stories. These are the Americans who are being most affected by the government shutdown.

Transportation Security Administration, more commonly known as TSA, is just one of the many branches of the federal government being forced to work without pay. As one of the lowest paid federal workers, it should come as no surprise that there has been a spike in the number of TSA employees who’ve been calling out sick lately. Airport security lines don’t seem to have been affected, but that doesn’t change the fact that people who are relying on their paychecks each week aren’t receiving them. Jacinda, whose husband is a TSA officer in Portland, told NPR:

“If there’s no check on the 26th, I have no idea what we’re going to do. Our rent is due, the electric bill is due, our cell phones are now past due. … I’m scared and I’m trying to be OK because I can’t be sad every day for my kids, and I can’t be stressed out because it affects how I parent.”

2. Active Members Of The Coast Guard

Since the Coast Guard falls under Homeland Security, active members on duty have been suffering from Trump’s shutdown as well. The government was able to scramble up the funds to pay them on December 31, but the next paycheck that they were supposed to receive January 15 was never delivered. They continue to work throughout the shutdown, however, as they are responsible for search and rescues along the coastlines and stopping drug smugglers. Former Coast Guard Commandant Thad Allen also spoke to NPR saying:

“I think when you have people providing emergency services to this country without pay, I think we ought to take a serious look at how we’re governed.”

3. Those Who Rely On Food Stamps

One in ten Americans relies on SNAP, or food stamps, to survive. While the Department of Agriculture released a press release stating that recipients will get their benefits for February early, as these were already funded prior to the shutdown, they won’t receive anything else after that until the government is up and running again. They expect to receive their food stamps this weekend, but many are suffering from the stress of what’s to come. Others may not have received last month’s food stamps at all like Ravyn Senter who wrote to CNN saying:

“Me and my husband normally use link or food stamps as income for groceries. We’ve normally managing for the month. Now that the government has been on this shutdown, we’re struggling with the little to no food in our home since we didn’t receive our daily food stamps for the month.”

First, we killed them for land and then we killed them for a wall. The Indian Health Service provides health services for over two million Native Americans, all who are now only receiving treatments deemed necessary. Clinics remain open, but their employees aren’t being paid which has caused many to start looking for jobs elsewhere. Not to mention how many Native Americans are suffering without medical care. Dante B. Halleck works in a federal hospital that serves the Native American community and told CNN:

“The impact? The loss of a service that is vital to an underserved population in the United States. If this shutdown lasts and people start to quit, at-risk patients could suffer the ultimate consequence.”

Since they aren’t salaried employees, contractors working for federal agencies won’t be receiving back pay for days they worked during the shutdown. They also won’t be paid for the days they didn’t work unless they use their paid time off. Anyone without any PTO in the bank is just SOL. A federal IT contractor, Jerry Fisher, pointed out to CNN:

“I’m a federal IT contractor impacted by the shutdown. Federal employees are in a terrible bind, but they will get back pay. The rest of us are out of work, period. Those of us lucky enough to have vacation hours are using what we have, but other than that we are already behind on utilities, mortgage, car payments, and basic needs. That is money we’ll never get back.”

6. Those In Need Of Financial Aid

One of the federal agencies that have been shut down is the IRS, which will make a hell of an interesting tax season and can delay refunds. But that’s beside the point. Right now, students all over the country are just starting their second semester in college and are in need of certain tax forms in order to receive their financial aid. This will likely lead to many students dropping out for the semester, being unable to afford the price of tuition. While deadlines vary from school to school, most will be unable to complete the full semester without coughing up the money. Students wrote to CNN to express their grief, one saying:

“My college has asked to provide 2016 tax transcript from IRS in order for the financial aid fund to be released to pay the tuition for Jan 2019 semester. But due to the shut down, all IRS local office and online and phone services are down. The due date for that was yesterday and I missed it. Now I have to wait until September to take those classes.”

TSA agents aren’t the only airline employees not getting paid these days. Air traffic controllers are working without knowing if they’ll be able to afford to eat by the end of the month, if they’re able to work at all. Most airports are working with skeleton crews who are overworked to make up for all of those who’ve been temporarily laid off. Aside from the fact that an over-tired employee who isn’t being paid is directing air traffic, planes are also not being inspected, making flying more dangerous than ever.  Mick Devine of the National Air Traffic Controllers Association told NPR:

“There is a concern that as this goes on, the human factors aspect of this shutdown will take a toll on the psyche and concentration level of our members.”

An air traffic control employee, Mike Jones, has also weighed in on the situation telling CNN:

“Living in uncertainty is no way for me to take care of the financial burden on my family. On top of that, other controllers are being assigned overtime to cover me being away. We are not bargaining chips in a political game.”

Gift-giving isn’t just a seasonal affair between friends, families and acquaintances. The art of gift-giving is also conducted on a national scale with countries often sending each other big, weird and expensive gifts. Experts in all things gifts, Vanilla Reindeer put together some examples of these expensive and odd gifts that have been shared between… END_OF_DOCUMENT_TOKEN_TO_BE_REPLACED

There are lots of ways you can make Pres. Trump feel welcome: you can offer him coffee, or mow a penis into a field for him to view as his plane lands. The willie in question has been chopped by Born Eco ahead of the arrival of President Trump, who visited the UK Monday for… END_OF_DOCUMENT_TOKEN_TO_BE_REPLACED

The year isn’t even halfway over, yet Donald Trump has managed to make a fool of himself and our country countless times. From inviting the national college football champions, the Clemson Tigers, all the way to the White House for some McDonald’s to his to the dreaded results of Mueller’s investigation, it has been one… END_OF_DOCUMENT_TOKEN_TO_BE_REPLACED

Republicans have always said that when they gained control in Congress, they would work to overturn Roe v. Wade and here they are, cashing in on that promise one state at a time. So far, Alabama, Arkansas, Georgia, Kentucky, Missouri, and Ohio have all passed incredibly restrictive laws on abortions, making it illegal for women… END_OF_DOCUMENT_TOKEN_TO_BE_REPLACED

If you’re on Snapchat, then you’ve probably played around with (and were likely horrified by) their filter gender swap filters. While you’re probably using these filters to send hilarious pics to your friends, some guys using them to create Tinder profiles. What likely started out as a joke has quickly evolved, and these guys are… END_OF_DOCUMENT_TOKEN_TO_BE_REPLACED

“Milkshaking” is a hilarious trend in Britain where a milkshake is thrown at and ideally lands on a far-right politician or activist. The point of this nonviolence protest is to humiliate them without causing injury. Physical injury at least. There’s no doubt that milkshaking has led to a few bruised egos. Not only is this… END_OF_DOCUMENT_TOKEN_TO_BE_REPLACED