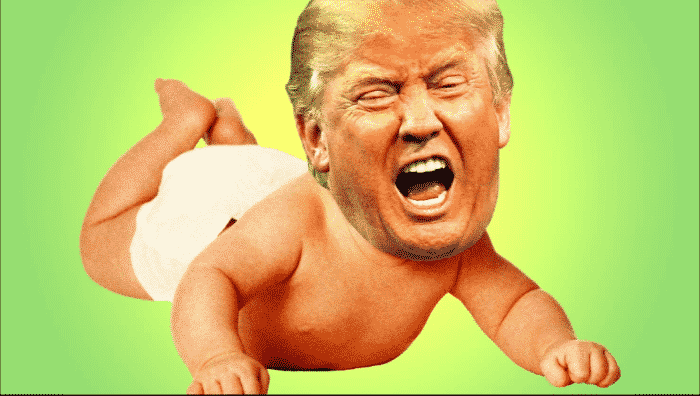 If you haven’t noticed, President Donald Trump has child-like tendencies that are far from endearing. His temper tantrums range from uncomfortably amusing to shockingly cringe-worthy with hardly a day gone by without incident. It’s not always easy to determine what qualifies as a tantrum and what registers as just a petty remark, but I think we’ve compiled a decent list here of all of Trump’s most notable tantrums since coming into office.

Trump’s Twitter tantrums often show his rage against this alleged fake news media he is convinced exists only to spread heinous lies about him. As of this moment, he has 374 tweets about fake news, many of which qualify as unnecessary outbursts, but how many can be categorized as tantrums? This particular tweet seems to work as he not only calls the media “crazy” and “unhinged” but he seems to think he’s the only reason they have any ratings. Trump also demonstrates how highly he thinks of himself by assuming he will be voted into office for a second term.

Trump Calls Out Republicans Who Snubbed Him

After the midterm elections, Trump literally listed the names of any Republican candidate who refused to embrace him in a press conference. He even followed up with some snide remark about them losing the election in some cases. He may have kept calm, but this is certainly a typical Trump tantrum that makes you wonder if his advisors are even doing their jobs anymore. Here’s a glimpse at what he said:

Trump Lashes Out On The Media

In the same press conference, Trump lashed out on members of the media simply for doing their job. Journalists were asking him questions he simply didn’t have the answers to and his frustration became apparent when he called PBS Newshour correspondent Yamiche Alcindor’s question racist. It seems important that I point out the fact that Alcindor is black, as Trump has been accused of racism on more than a few occasions. She later tweeted about the event saying:

Trump then went on to CNN’s Jim Acosta calling him “rude” and “the enemy of the people.” This is the infamous exchange in which Acosta was of assaulting a woman who was trying to take the microphone that was in his hand and had his press pass temporarily suspended.

This past summer, Iranian President Rouhani warned that Americans “must understand that war with Iran is the mother of all wars and peace with Iran is the mother of all peace,” during a televised event. Trump took this as a threat and instead of responding in a responsible like a president should, he took to Twitter, and not even the official Twitter page for POTUS. The President of the United States used all caps to intimidate the Iranian president in this Twitter tantrum, one that likely got a few laughs from our enemies overseas.

Trump is so desperate to stop the investigation into Russia’s involvement in the last presidential election, and it shows in this Twitter tantrum. It screams of guilt as Trump calls the investigation a “witch hunt” and asks for Attorney General Jeff Sessions to end special counsel Robert Mueller’s investigation.  Too bad his plan didn’t work.

Trump’s border wall often triggers one of his infamous tantrums, and a televised meeting with House Minority Leader Nancy Pelosi and Senate Minority Leader Charles E. Schumer was no exception to enduring his juvenile behavior. Watch as Trump interrupts the two politicians at every moment he gets, and even inspires a few chuckles on Schumer’s end. The meeting that took place in the Oval Office was the last attempt to avoid a government shutdown. Both Pelosi and Schumer said there were fair compromises being considered, but we all know how that turned out. The conversation gets so heated at one point that Schumer asks that they continue the debate in private later.

Later Trump calls the need for a wall a “national emergency” because people are bringing drugs into our country and coming here illegally with their contagious diseases. If that’s the case, then our country has had this national emergency for many, many years now. He ends up yelling at Schumer claiming to be “proud” to shut down the government for the sake of border security and quickly ends the meeting.

It’s scary to think this, but you have to see that Kim Jong Un and Donald Trump are two peas in a pod. Before the two met, they seemed to rub each other the wrong way, and it resulted in a few burst-like tantrums on Trump’s end. It seemed to begin when Jong Un allegedly called Trump “old,” which caused the president to rebuttal with an indirect insult calling the North Korean dictator “short and fat.” This eventually led to nuclear bomb threats and Trump creating the nickname “Rocket Man” for Jong Un.

At least Trump had a witty response to these nuclear threats. By letting an unbalanced dictator like Kim Jong Un know that his nuclear button is bigger and more powerful, we can ensure that at least if we die they’ll die as well. However, whether or not that’s enough to keep Jong Un’s hands off of his nuclear button is undetermined. Hopefully, the men and women behind our government as well as theirs were smart enough to not make either button functionable.

Gift-giving isn’t just a seasonal affair between friends, families and acquaintances. The art of gift-giving is also conducted on a national scale with countries often sending each other big, weird and expensive gifts. Experts in all things gifts, Vanilla Reindeer put together some examples of these expensive and odd gifts that have been shared between… END_OF_DOCUMENT_TOKEN_TO_BE_REPLACED

There are lots of ways you can make Pres. Trump feel welcome: you can offer him coffee, or mow a penis into a field for him to view as his plane lands. The willie in question has been chopped by Born Eco ahead of the arrival of President Trump, who visited the UK Monday for… END_OF_DOCUMENT_TOKEN_TO_BE_REPLACED

The year isn’t even halfway over, yet Donald Trump has managed to make a fool of himself and our country countless times. From inviting the national college football champions, the Clemson Tigers, all the way to the White House for some McDonald’s to his to the dreaded results of Mueller’s investigation, it has been one… END_OF_DOCUMENT_TOKEN_TO_BE_REPLACED

Republicans have always said that when they gained control in Congress, they would work to overturn Roe v. Wade and here they are, cashing in on that promise one state at a time. So far, Alabama, Arkansas, Georgia, Kentucky, Missouri, and Ohio have all passed incredibly restrictive laws on abortions, making it illegal for women… END_OF_DOCUMENT_TOKEN_TO_BE_REPLACED

If you’re on Snapchat, then you’ve probably played around with (and were likely horrified by) their filter gender swap filters. While you’re probably using these filters to send hilarious pics to your friends, some guys using them to create Tinder profiles. What likely started out as a joke has quickly evolved, and these guys are… END_OF_DOCUMENT_TOKEN_TO_BE_REPLACED

“Milkshaking” is a hilarious trend in Britain where a milkshake is thrown at and ideally lands on a far-right politician or activist. The point of this nonviolence protest is to humiliate them without causing injury. Physical injury at least. There’s no doubt that milkshaking has led to a few bruised egos. Not only is this… END_OF_DOCUMENT_TOKEN_TO_BE_REPLACED