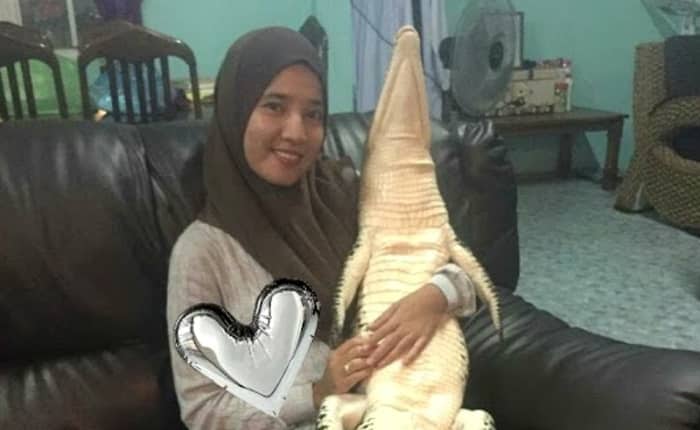 Cities often expand at quite a rapid rate and human beings’ shelter and influence often overlap with nature‘s because of this. Hence, homes can and will get a lot of odd and unwanted visitors from the animal kingdom. A wild crocodile is surely not something you see every day as a visitor, that’s probably why a homeowner gave it a cuddle instead of a shoo.

The incident happened in Malaysia last week in 22-year-old homeowner Azy Nadia Aziz’s home. Aziz was going about her usual house activities until she came upon the backyard. There, she found an unlikely guest: a wild crocodile just hanging around making itself at home.

Any other person would have felt threatened at the mere sight of the apex predator. They have been known to grind humans for food, why else would we make horror movies about them? Aziz, however, did not feel fear or danger from the wild crocodile. It seems she actually found the reptilian home invader quite cute, so Aziz picked it up and cuddled it like a pet:

“I saw the crocodile not moving and not aggressive, so I caught it and brought it into the house,” said Aziz. The said wild crocodile measured around 1.5 meters (4.92 feet) long and appears to be quite young. Aziz also assumed that it might have come from the nearby river which is close to her house. Regardless, the photos and videos of Aziz cuddling the croc drew some flak online.

“Stop criticising me as I did not keep it as a pet. I only captured it for a while,” said Aziz after much backlash from the internet. Aziz also stressed that she immediately released it afterwards.

The Blood Test, The Swab Test, and The Saliva Test      Essentially, there are three general types of COVID-19 testing produced so far. One is the rapid test, the second is the saliva test and the other is the swab test. The rapid test (also known as the anti-body test) uses blood samples. The swab test… END_OF_DOCUMENT_TOKEN_TO_BE_REPLACED

The COVID-19 pandemic is one of the biggest modern pandemics known in history. Currently, there are more than five million confirmed cases in the world, with a total of 333,000 deaths. A total of 1.6 million of these confirmed cases are in the US alone. The world is currently in a race of finding a… END_OF_DOCUMENT_TOKEN_TO_BE_REPLACED

Despite concrete data and research, people’s opinions will always be diverse when it comes to a variety of topics including religion, politics, gender, and more. Denial is a common reaction to many important discussions and serious world events. The COVID-19 pandemic does not differ from any issues and is subject to opinions from critiques all… END_OF_DOCUMENT_TOKEN_TO_BE_REPLACED

Back in January, when the Wuhan, China coronavirus broke out, it didn’t make it to the front page of newspapers, in print or virtual form. Today, January feels like a lifetime away. Like it or not, people around the world have adapted to the new normal – staying at home, frequent hand washing, and social… END_OF_DOCUMENT_TOKEN_TO_BE_REPLACED

Since the beginning of the year 2020, the whole world has been stupefied by the rapid spread of a deadly coronavirus known as COVID-19. World superpowers in the West were unable to prevent the virus from reaching their borders. Because of this fact, the novel coronavirus COVID-19 became a world-wide pandemic no less than three… END_OF_DOCUMENT_TOKEN_TO_BE_REPLACED

For months since the start of 2020, the attention of the world has focused on immediate response efforts to contain and combat the novel coronavirus, also known as COVID-19. The deadly virus has pushed millions of people into isolation.  This kept people in their homes for weeks and months away from their work, their friends,… END_OF_DOCUMENT_TOKEN_TO_BE_REPLACED