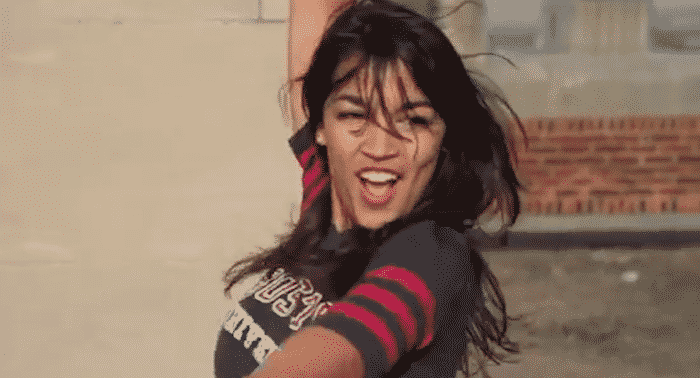 In an attempt to embarrass Congresswoman Alexandria Ocasio-Cortez, a video of her dancing back in college was recently leaked. Far from the dancing videos most of us took in college, this one appears to be a project she did with classmates that shows off Boston University’s campus while they all bust a move. Inspired by the class ’80s movie “The Breakfast Club,” the video’s release was hardly the scandal it was intended to be. If anything, it increased her popularity.

Ocasio-Cortez’s response was to shut down the haters with another dance video. In this one, she dances to “War” outside of her office, and it’s likely not a coincidence that the short video captured the song’s chorus: “War, huh, good god.  What is it good for? Absolutely nothing!”

Unfortunately, with all good things in life also comes the bad, and this case is no different. With her increase in popularity comes an increase haters. These are the most vicious trolls who commented on Ocasio-Cortez’s latest dance video.

2. Troll Thinks The Sky Is The Limit

Everything about this troll’s tweet is just wrong. Not only is this not funny but it’s just completely unnecessary. Clearly, the sky is not the limit for this guy. It’s more like the ceiling is the limit. The ceiling of a dog house.

3. Troll Wants All Dancing, No Voting

Why can’t we pass a law that allows Democrats to dance but not vote? Because that would be called a dictatorship darling!

There will always be men around who can’t see women as anything but sexual objects. This guy seems to be one of them. If you can’t comprehend his butchered English, he’s asking a congresswoman to take off her clothes so he can throw singles at her. Even if you don’t agree with her political views, she is still a professional government employee. Have some respect.

Let’s get one thing straight. Ocasio-Cortez is registered as a Democratic Socialist, which is different from socialism. The political party is widely misunderstood and gained a lot of negative attention during the Cold War. Ocasio-Cortez isn’t calling for socialism like this troll states in their tweet. She feels that Americans have the right to healthcare, housing, and a job, all that can be found on her website. As one of the newest members of Congress, Ocasio-Cortez is right where she’s supposed to be. The only “sad joke” are these trolls who spend too much time on Twitter and not enough time educating themselves on the issues.

The Blood Test, The Swab Test, and The Saliva Test      Essentially, there are three general types of COVID-19 testing produced so far. One is the rapid test, the second is the saliva test and the other is the swab test. The rapid test (also known as the anti-body test) uses blood samples. The swab test… END_OF_DOCUMENT_TOKEN_TO_BE_REPLACED

The COVID-19 pandemic is one of the biggest modern pandemics known in history. Currently, there are more than five million confirmed cases in the world, with a total of 333,000 deaths. A total of 1.6 million of these confirmed cases are in the US alone. The world is currently in a race of finding a… END_OF_DOCUMENT_TOKEN_TO_BE_REPLACED

Despite concrete data and research, people’s opinions will always be diverse when it comes to a variety of topics including religion, politics, gender, and more. Denial is a common reaction to many important discussions and serious world events. The COVID-19 pandemic does not differ from any issues and is subject to opinions from critiques all… END_OF_DOCUMENT_TOKEN_TO_BE_REPLACED

Back in January, when the Wuhan, China coronavirus broke out, it didn’t make it to the front page of newspapers, in print or virtual form. Today, January feels like a lifetime away. Like it or not, people around the world have adapted to the new normal – staying at home, frequent hand washing, and social… END_OF_DOCUMENT_TOKEN_TO_BE_REPLACED

Since the beginning of the year 2020, the whole world has been stupefied by the rapid spread of a deadly coronavirus known as COVID-19. World superpowers in the West were unable to prevent the virus from reaching their borders. Because of this fact, the novel coronavirus COVID-19 became a world-wide pandemic no less than three… END_OF_DOCUMENT_TOKEN_TO_BE_REPLACED

For months since the start of 2020, the attention of the world has focused on immediate response efforts to contain and combat the novel coronavirus, also known as COVID-19. The deadly virus has pushed millions of people into isolation.  This kept people in their homes for weeks and months away from their work, their friends,… END_OF_DOCUMENT_TOKEN_TO_BE_REPLACED