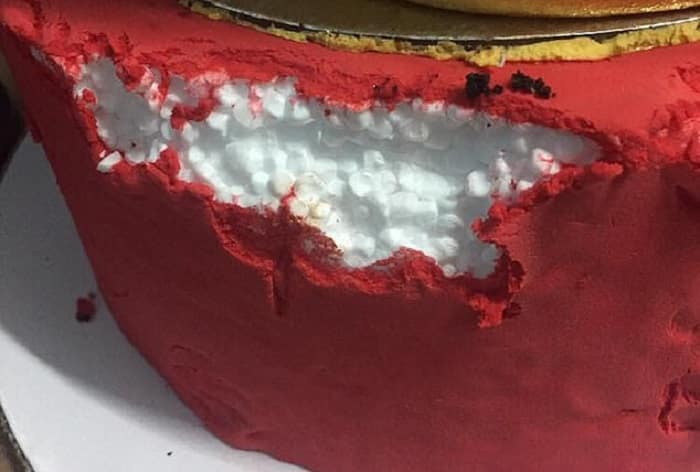 Weddings do not always go as planned. While there is a huge market for weddings ever since they became a modern milestone, anything monetized or commercialized tends to get spoiled. One bride even burst into tears after realizing that her wedding planner scammed her with styrofoam or polystyrene cake.

We have seen our fair share of really bad weddings, but boy, oh boy, this one takes the cake. It happened in the Philippines to 26-year-old Shine Tamayo and her betrothed, 40 -year-old Jhon Chen. Both of them paid the wedding planner P140,000 ($2,700) to supply the food and decorations for their wedding.

The two got married, said their vows, and then went to the party. As usual, the mandatory cake cutting took place. However, when Tamayo, the bride, sliced through the icing, she discovered that it was not pastry she was cutting into, but polystyrene styrofoam. She couldn’t help it, Tamayo burst into tears in front of her family and friends:

Immediately after the styrofoam cake was discovered, the guests and family took the wedding planner culprit to the police. Upon closer inspection, the police found out that the whole base of the two-tier cake was made purely out of styrofoam and covered with icing. It was only the top tier which was real.

“The woman we paid to do the food has ruined my wedding… I will not accept sorry from her, an apology is not good enough, she needs to go to jail because she ruined my wedding. I have never been so humiliated in all my life. This was supposed to be one of my most treasured memories for my entire life. Instead, it is the worst,” said a distraught Tamayo.

Seems it was just like yesterday when we all fought over and hoarded HEAPS of toilet paper for no reason at all. All the memories are rushing in as the US suffers from a gas shortage. As expected, gas shortage memes are everywhere to bring light to our currently sad situation. Along the US east… END_OF_DOCUMENT_TOKEN_TO_BE_REPLACED

Israel’s Iron Dome has protected the country against missile attacks for years. The Iron Dome in Israel is the biggest of its kind in the world. No other countries in the world use the same air defense system, meaning it is one of a kind. The tension between Israel and Gaza has been going on… END_OF_DOCUMENT_TOKEN_TO_BE_REPLACED

The world is devastated by the news that Britain’s Prince Philip, the Duke of Edinburgh, has died at the age of 99. Palace media confirms that the Duke has expired mid-day today, April 9th. The announcement did not contain any specifics on the cause of death. The United Kingdom will enter a state of national… END_OF_DOCUMENT_TOKEN_TO_BE_REPLACED