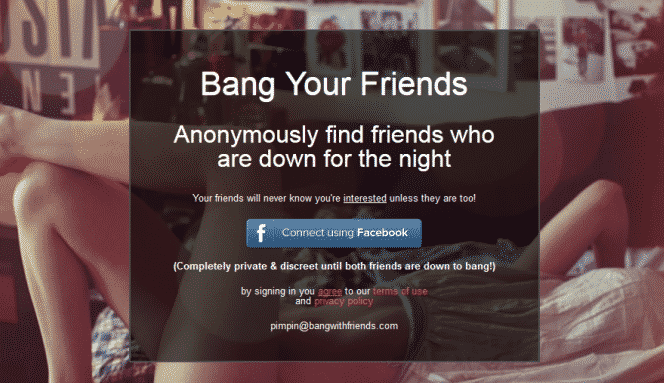 The unapologetic Facebook hookup app Bang With Friends has created a storm of controversy in recent weeks, but the one thing no one is talking about is the app’s more G-rated alternatives. “Clean” versions of the Bang With Friends app concept exist, and at least one has been around for months.

A quick recap: In case you’ve never heard of Bang With Friends, it’s a Facebook app that allows you to, in the words of the app’s creators, “throw a bone” to Facebook friends you find attractive. You access the app, and then browse through your friends list. You click on the friends you would like to sleep with, but they’re not notified of your intentions unless they’re down to “bone” you, and make it known by clicking your profile.

If you both want to sleep with each other, Bang With Friends sends each of you an email, cutting out the awkward middle man of “feeling each other out” and potential courtship and helping you climb straight into bed with your mutually hot-blooded Facebook friend.

The three college students behind Bang With Friends have granted a number of interviews explaining their intentions behind the app, most notably to The Daily Beast and MotherBoard. While Daily Beast’s Anna Klassen aimed for the middle in her write-up, MotherBoard’s Kat George admitted to having “some beef” with the app’s creators, calling Bang With Friends a “technological little whorehouse.”

Bang With Friends’ creators have said that their only intention is to “cut through the pretense of dating and connect people to friends-with-benefits or more.” They argue that the sexual conversation, as they have defined it, “happens all of the time offline and online via Facebook. We’re all adults here. Let’s be honest about our sexuality!”

As hard a pill as it may be to swallow for some, they’re completely right. That is what some people want.

But instead of throwing up a collective Internet rage fist at Bang With Friends, why don’t we consider the alternatives?

Georgi Stoianov, one of the founders of an app called My Love Checker, reached out to me recently, and was dismayed over the debut of Bang With Friends. He called it “just a bad copy of the original idea;” an app that works similarly (but without the bawdiness) that his company debuted five months ago.

Here’s a video of My Love Checker at work:

As you can see, you’re able to click on Facebook friends you’re crushing on. No one sees it but the app user. If your crush clicks on you using the app, then you both get a notification and hypothetically set up a date. It’s merely an app that helps shy you determine whether or not an attraction you feel is mutual. It’s the exact same thing as Bang With Friends, but it’s more of a date and relationship-friendly app instead of a sex and hookup-driven app.

My Love Checker has been around since September of 2012, and without any ad campaigns or promotion, they host roughly 1,000 users.

Merely wanting to differentiate My Love Checker from Bang With Friends, Stoianov said:

“As creators of My Love Checker’, we believe that every single person has, at least once, had hard times, being really keen on someone, eager to find out whether it is mutual and having serious reasons not to reveal her/his own feelings. So this is where our unique app is meant to help – teenagers, young people, not so young people – practically everyone. The best part of it is that you really ”risk” nothing – no wall post, no messages, absolutely nothing; only if it is mutual the two persons involved will get notifications and that’s it… So we clearly want to differentiate form these guys that have just copied the idea in general and turned it into an ugly variation of the original.”

A mobile app called Let’s Date launched this week, and once again, it uses some of the same concepts as Bang With Friends and My Love Checker.

With Let’s Date, created by Suicide Girls founder Sean Suhl, you log in with Facebook Connect, answer a few questions about yourself, and then fill up a “dating card” with Facebook crushes. Like Bang With Friends and My Love Connection, you can’t message one another unless you’ve both already mutually “liked” each other, though Let’s Date is unique in that it browses all of its users (not just your friends) to match you based on compatibility.

We talked briefly with the Bang With Friends creators, who have all elected for total anonymity before tying their names to an app that could be equal parts career maker and ruiner.

The California-based app is clearly in the lead with over 370,000 users in under two weeks, and over 55,000 couples hooked up, according to “C,” my Bang With Friends contact. “C” also says that the developers of Bang With Friends are “overwhelmed by the support and kudos we’ve received from so many of our users,” and “wish the best of luck” to their competitors (specifically, “C” said that he is not aware of My Love Checker or others).

In line with our standard editorial policy here at Social News Daily, we’re not here to take sides. All I would suggest to journalists, bloggers with an axe to grind, app developers who feel cheated out of a concept, or garden-variety Internet users who either find Bang With Friends insulting and immoral (or who are ashamed of secretly wanting to try it out) is to remember why social is so great. It’s corny, it’s glib, you might flame me, but it’s true, so I’m going to say it:

It’s the Golden Rule of social. There’s room for everyone. Bang With Friends has an audience and a user base who want what they are offering. My Love Checker and Let’s Date will probably find wider appeal and the approval of a greater audience over time. Bang With Friends has the lead because they were controversial and direct. Be patient. It’s a good concept, and the “find true love” apps might win in the end.

But even still, it’s not a competition. There’s room for all of you.

And to prevent this sort of thing from happening again, you could file a damn patent!

You can check out My Love Checker here, Bang With Friends here, and Let’s Date here. Let us know what you think. Which of these apps meet your romantic needs?

UPDATE: A previous version of this article referred to a dating app which has not yet been released from embargo for press coverage. We will re-include that information on February 7.

UPDATE 2: The original article has been restored.