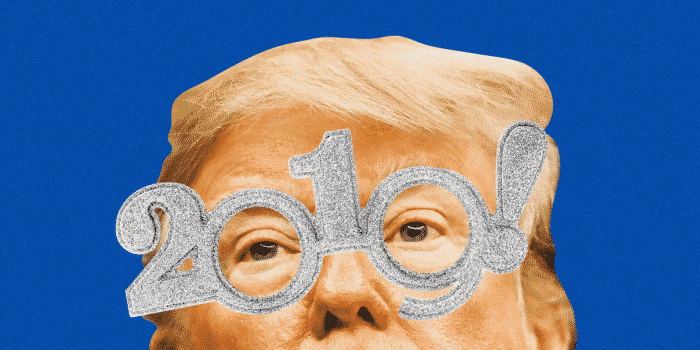 The official resolutions Donald Trump gave to the media for 2019 were “success, prosperity and the health of our country.” We all know that’s a load of crap though. Trump would never have been able to come up with something so selfless on his own. Maybe the guy finally hired a writer. Let’s take a look at what Trump’s New Year’s resolutions for 2019 really are and what they should be.

Since Trump could never verbalize his actual New Year’s resolutions for 2019, I’ve taken it upon myself to do it for him. Here’s what he really has in mind for the upcoming year.

We all know that the border wall is all that Trump has on his mind these days. At least, it should be. He shut down the damn government over it. It’s clear that he will do whatever it takes to get his way, and he’s not willing to compromise.

With the 2020 elections rapidly approaching, we can expect that Trump will be desperately trying to improve his likability this year. This will be more work for his advisors than for Trump as they’re the ones who need to figure out ways to keep him quiet. Or at the very least, keep him off Twitter.

Make Peace With His Tiny Hands

We’ve heard a lot about Trump’s tiny hands and his other small, umm, body parts since he came into office. It is something he has shown great dicomfort discussing and has become his biggest insecurity. Come 2019, Trump will come to terms with his shortcomings and feel more at peace with body.

The people have spoken, and while all of the things Trump has planned for 2019 are fine and dandy, we’d prefer if he took on some of these feats as well.

Most people would probably prefer if Trump stopped tweeting altogether, but no one would complain if he started posting less often. It’s unprofessional and kind of makes our country look like a joke, but that’s just my opinion. Nothing he shares is important or even remotely intellectual, so we could do without in 2019.

In 2018, Trump proved to the world that he knows the words to neither the national anthem nor “God Bless America.” It’s one thing not to know that Puerto Rico is a territory of the United States or the basic makeup of the Constitution, but learning the words to these songs would require minimal effort. Of all of his resolutions, this is one might actually be manageable for the president.

Whether Trump is intentionally lying or just can’t help being a major bullshitter, he should be more aware of what he’s saying before opening his mouth. It’s hard to respect a president who has proven time and time again that he is a liar and has little political knowledge. At least we can look forward to the fact that because the 2020 elections are coming up most of what he says this year will be scripted. H.

Have More Respect For Women

Trump often compares women to animals like pigs and dogs in his tweets, which is quite nice considering he has made it clear that he views females as objects. While it’s not possible to ask that Trump attempt to respect all women come 2019, but perhaps he could start with just one. Like his wife.

The Michelle Obama Podcast was released on the 29th of July and can be streamed on Spotify, both for free and premium users. The world is currently hyped that the Former First Lady of the United States has released the first episode of her latest podcast. What made listeners even more excited was when she… END_OF_DOCUMENT_TOKEN_TO_BE_REPLACED

Research in Britain has deduced that there are a total of six “general” classifications of COVID-19 symptoms. The research, originally published in June of 2020, has revealed that the symptoms of COVID-19 can be generalized into six different categories. This is based on the data collected from a symptom tracking app. It has been widely proven… END_OF_DOCUMENT_TOKEN_TO_BE_REPLACED