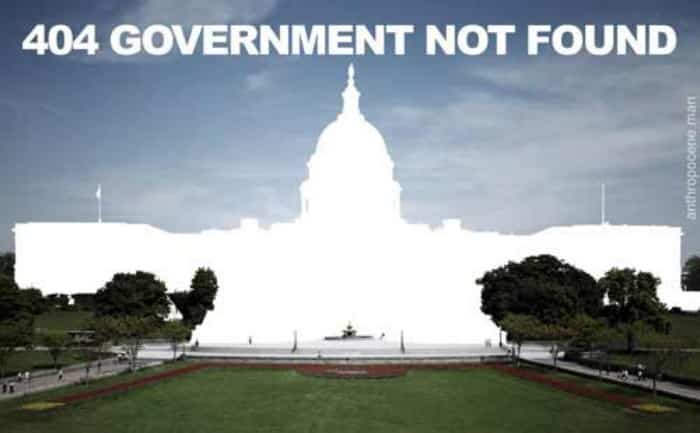 For the third time in 2018, the United States government has been shut down. The final shutdown has spilled over to 2019, and those affected are really starting to suffer. Many government employees are going without pay while citizens are without many services they need to survive like foodstamps. This is hardly how so many people wanted to spend their holidays, yet there’s no end to the standoff in sight. In the meantime, Trump’s latest government shutdown has inspired some truly inspiring memes for us to enjoy.

It makes sense! If our taxes go towards the services we receive from the government, and the government stops providing those services even for a short period of time, then we shouldn’t have to pay those taxes. Considering the fact that they aren’t paying government employees and that most of them won’t receive backpay, collecting taxes at this time would mean they’re earning a profit from the shut down.

Kids down south are taking advantage of the government shutdown by setting up their lemonade stands and selling drinks on the street. With a government shut down they can be sure that “Permit Patty” won’t be ratting them out, as there’s no where to get a permit these days. Even the kids living in the colder states are taking to the streets to sell hot chocolate, tea, and coffee, shouting “down with the man!” every few minutes.

Our country can’t afford to build this enormous wall, yet Trump just can’t accept that. What ever happened to making Mexico pay for it? They’re only one of the poorest countries in our vicinity, but surely they can afford it if we can not. Even the GoFundMe page that raised millions to build the wall in just a few days doesn’t make a dent on the enormous price tag on Trump’s little project. Oh well. Maybe we should focus on something more important like affordable healthcare or housing veterans.

The real reason for a government shutdown right before the holidays: massive parties. They’ll likely need another week to recover from their hangovers and then we can expect the government to be up and running again. Until Cinco de Mayo comes around.

Likely every government employee who isn’t currently being paid is thinking this in their head. It must be nice to get a few days off unexpectedly, but when money is tight, a shutdown is the worst thing to happen to government employees. Many have come forward about their experiences and are facing homelessness, food shortages, and a struggle to receive healthcare. They’ve been applying for in hopes to get just a fraction of the money they’re losing during this shutdown.

Take Back The Colonies

The British may have been keeping things quiet for a while, but you bet your ass they will always have their eyes on American land. Fortunately, we’re only experiencing a partial government shutdown. A complete shutdown would stick a huge target on American land, but the British would certainly be first in line.

America’s Most Embarrassing Political Moments Of 2018

The Blood Test, The Swab Test, and The Saliva Test      Essentially, there are three general types of COVID-19 testing produced so far. One is the rapid test, the second is the saliva test and the other is the swab test. The rapid test (also known as the anti-body test) uses blood samples. The swab test… END_OF_DOCUMENT_TOKEN_TO_BE_REPLACED

The COVID-19 pandemic is one of the biggest modern pandemics known in history. Currently, there are more than five million confirmed cases in the world, with a total of 333,000 deaths. A total of 1.6 million of these confirmed cases are in the US alone. The world is currently in a race of finding a… END_OF_DOCUMENT_TOKEN_TO_BE_REPLACED

Despite concrete data and research, people’s opinions will always be diverse when it comes to a variety of topics including religion, politics, gender, and more. Denial is a common reaction to many important discussions and serious world events. The COVID-19 pandemic does not differ from any issues and is subject to opinions from critiques all… END_OF_DOCUMENT_TOKEN_TO_BE_REPLACED

Back in January, when the Wuhan, China coronavirus broke out, it didn’t make it to the front page of newspapers, in print or virtual form. Today, January feels like a lifetime away. Like it or not, people around the world have adapted to the new normal – staying at home, frequent hand washing, and social… END_OF_DOCUMENT_TOKEN_TO_BE_REPLACED

Since the beginning of the year 2020, the whole world has been stupefied by the rapid spread of a deadly coronavirus known as COVID-19. World superpowers in the West were unable to prevent the virus from reaching their borders. Because of this fact, the novel coronavirus COVID-19 became a world-wide pandemic no less than three… END_OF_DOCUMENT_TOKEN_TO_BE_REPLACED

For months since the start of 2020, the attention of the world has focused on immediate response efforts to contain and combat the novel coronavirus, also known as COVID-19. The deadly virus has pushed millions of people into isolation.  This kept people in their homes for weeks and months away from their work, their friends,… END_OF_DOCUMENT_TOKEN_TO_BE_REPLACED