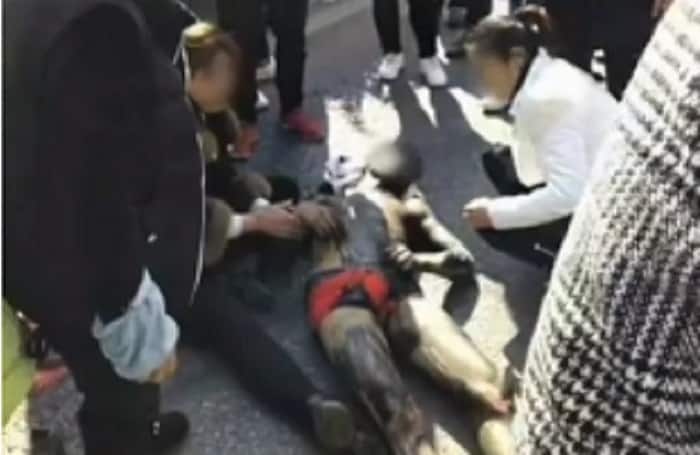 Weddings are supposedly fun, right? After all, you only get married a few times in your life, once if you’re lucky, zero if you’re luckier… just kidding. Anyway, one wedding for a Chinese groom turned into a nightmare after the wedding hazing he got from his friends ended up nearly killing him after they humiliated him, beat him up, and caused him to be hit by a car.

24-year-old Ai Guangtao from Guizhou province, China thought that his wedding would go smoothly. You see, some weddings just don’t. However, it was not the bridezilla, nor the in-laws which caused the bump in the road– it was Ai’s friends. Apparently, he and his friends still practiced the notorious Chinese tradition of wedding hazing.

It’s pretty much just hazing but for grooms. Hence, Ai’s friends reportedly tied him to a pole, stripped him naked, pelted him with eggs, doused him with alcohol, and sprayed him with ink before he was beaten with bamboo sticks. Of course, this was too much for Ai, so he managed to escape and run away from them. Because of this, he got hit by a car after hopping over a fence into a busy highway.

Ai received a skull fracture and brain hemorrhage due to being hit by a car and taking a beating prior to that. He was also found lying on the road half-naked with ink all over his body. Of course, the wedding had to be postponed because of what happened to him.

As if Ai’s problems are not enough, the car driver’s insurance company deemed Ai responsible for the accident. They then demanded that Ai pay the sum of 30,000 yuan ($4,370) for the car’s damages. Ai, however, did the obvious next step, he is now suing his friends for the wedding hazing so that he can pay for the damages to the car. Suffice to say, he won’t be having him usual best men at his wedding.

Gift-giving isn’t just a seasonal affair between friends, families and acquaintances. The art of gift-giving is also conducted on a national scale with countries often sending each other big, weird and expensive gifts. Experts in all things gifts, Vanilla Reindeer put together some examples of these expensive and odd gifts that have been shared between… END_OF_DOCUMENT_TOKEN_TO_BE_REPLACED

There are lots of ways you can make Pres. Trump feel welcome: you can offer him coffee, or mow a penis into a field for him to view as his plane lands. The willie in question has been chopped by Born Eco ahead of the arrival of President Trump, who visited the UK Monday for… END_OF_DOCUMENT_TOKEN_TO_BE_REPLACED

The year isn’t even halfway over, yet Donald Trump has managed to make a fool of himself and our country countless times. From inviting the national college football champions, the Clemson Tigers, all the way to the White House for some McDonald’s to his to the dreaded results of Mueller’s investigation, it has been one… END_OF_DOCUMENT_TOKEN_TO_BE_REPLACED

Republicans have always said that when they gained control in Congress, they would work to overturn Roe v. Wade and here they are, cashing in on that promise one state at a time. So far, Alabama, Arkansas, Georgia, Kentucky, Missouri, and Ohio have all passed incredibly restrictive laws on abortions, making it illegal for women… END_OF_DOCUMENT_TOKEN_TO_BE_REPLACED

If you’re on Snapchat, then you’ve probably played around with (and were likely horrified by) their filter gender swap filters. While you’re probably using these filters to send hilarious pics to your friends, some guys using them to create Tinder profiles. What likely started out as a joke has quickly evolved, and these guys are… END_OF_DOCUMENT_TOKEN_TO_BE_REPLACED

“Milkshaking” is a hilarious trend in Britain where a milkshake is thrown at and ideally lands on a far-right politician or activist. The point of this nonviolence protest is to humiliate them without causing injury. Physical injury at least. There’s no doubt that milkshaking has led to a few bruised egos. Not only is this… END_OF_DOCUMENT_TOKEN_TO_BE_REPLACED