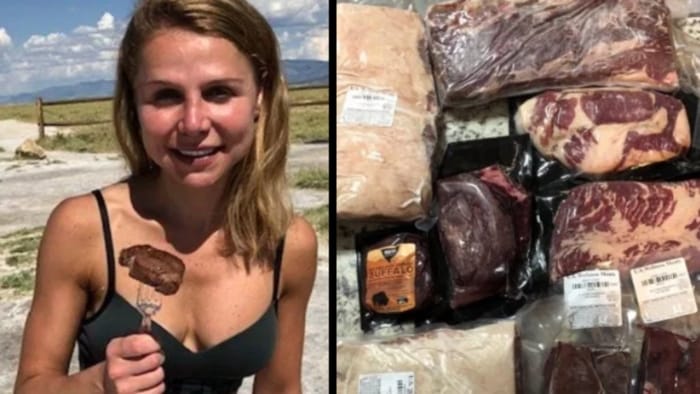 A former vegan who after being bitten by a spider, suffered an infection and now ONLY eats meat due to stomach deficiencies.

Slywia Tabor, from Sacramento, in July 2017 was out camping when she was bitten on the ankle, which prompted her to break out in small pimples on her body and her flesh started to rot away.

“I didn’t think much of it at first. It was only a small bite on my ankle,” said Tabor. “But in late August, I developed this pimple in my groin area, which over the next days grew and grew until it was about the size of my hand.”

As the issue began to disperse across her body Tabor had be raced to the hospital, where she was diagnosed with NF (necrotising fasciitis) and sustained a 3-hour operation to stop the disease from spreading even further.

Tabor had to receive a skin graft on her stomach to supplant the skin that had been eaten away as an effect of the illness.

“Because I was on lots of antibiotics, which kills all of the good bacteria in your gut that you need to digest things,” she explained. Tabor claims the only thing she ate that wouldn’t go ‘straight through her’ was meat while taking the antibiotics.

“The more I looked into it, the more I discovered that meat eating is the most efficient way of absorbing nutrients, far more so than when you add carbohydrates and vegetables into the mix. I just feel so much better than I ever have done, even when I was eating a normal diet.” Tabor added, “I source my own meat from a local farmer. I know that it is coming from a good place, so the ethical concerns that I had before don’t worry me anymore. Vegetables and seeds – which were for a long time my only food source, are actually anti-nutrients, compounds which if eaten excessively interfere with your gut absorbing what it needs. And that definitely affected me in the long-run.”

Gift-giving isn’t just a seasonal affair between friends, families and acquaintances. The art of gift-giving is also conducted on a national scale with countries often sending each other big, weird and expensive gifts. Experts in all things gifts, Vanilla Reindeer put together some examples of these expensive and odd gifts that have been shared between… END_OF_DOCUMENT_TOKEN_TO_BE_REPLACED

There are lots of ways you can make Pres. Trump feel welcome: you can offer him coffee, or mow a penis into a field for him to view as his plane lands. The willie in question has been chopped by Born Eco ahead of the arrival of President Trump, who visited the UK Monday for… END_OF_DOCUMENT_TOKEN_TO_BE_REPLACED

The year isn’t even halfway over, yet Donald Trump has managed to make a fool of himself and our country countless times. From inviting the national college football champions, the Clemson Tigers, all the way to the White House for some McDonald’s to his to the dreaded results of Mueller’s investigation, it has been one… END_OF_DOCUMENT_TOKEN_TO_BE_REPLACED

Republicans have always said that when they gained control in Congress, they would work to overturn Roe v. Wade and here they are, cashing in on that promise one state at a time. So far, Alabama, Arkansas, Georgia, Kentucky, Missouri, and Ohio have all passed incredibly restrictive laws on abortions, making it illegal for women… END_OF_DOCUMENT_TOKEN_TO_BE_REPLACED

If you’re on Snapchat, then you’ve probably played around with (and were likely horrified by) their filter gender swap filters. While you’re probably using these filters to send hilarious pics to your friends, some guys using them to create Tinder profiles. What likely started out as a joke has quickly evolved, and these guys are… END_OF_DOCUMENT_TOKEN_TO_BE_REPLACED

“Milkshaking” is a hilarious trend in Britain where a milkshake is thrown at and ideally lands on a far-right politician or activist. The point of this nonviolence protest is to humiliate them without causing injury. Physical injury at least. There’s no doubt that milkshaking has led to a few bruised egos. Not only is this… END_OF_DOCUMENT_TOKEN_TO_BE_REPLACED