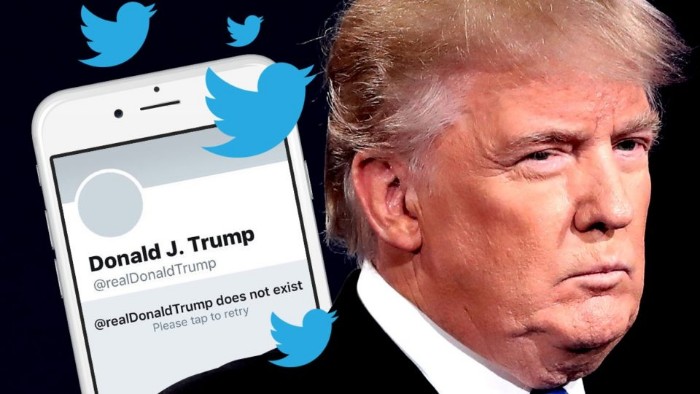 If Donald Trump were running the Twitter account of a major company, he’d be running the brand into the ground. There’s no doubt that he would have been fired within his first few weeks to prevent him from damaging the brand’s reputation. So, why is different now that he’s destroying the reputation of the United States? With just a few clicks, Trump has tweeted our country into disgrace, making many people wish he’d put his personal social media accounts to rest until his term is over. Here are just a few reasons why Trump, and all future presidents, shouldn’t be allowed on Twitter.

While the official POTUS Twitter account manages to remain (kind of) professional and informative, Trump’s personal page reads like a madman is writing it. His version of transparency comes off like insanity making the United States the butt of political jokes all over the world. Most of what Trump shares are petty child-like insults, and actually have very little to do with keeping Americans informed, so what’s the point? The President should either give up their personal accounts or have someone in professional marketing monitor their accounts to prevent this kind of idiocy.

It’s safe to assume that running an entire country is a fulltime job, yet Trump somehow manages to find the time to post to Twitter on numerous occasions throughout the day. Between his personal account and the POTUS page, Trump usually ends up writing several posts per day. If that’s not a YYUUUGEE waste of time, then I don’t know what is. The only benefit is that Trump is too preoccupied with tweeting to do any real damage to our country. Future presidents, however, should be advised to have better time management at the very least.

3. Oversharing Can Put Our Country At Risk

When the president is given access to social media without proper moderation, especially a president as stupid as Trump, he shares information with the world that could put our country at risk. America isn’t exactly loved by the world these days, and social media has become just another weapon that can be used against us. Trump made it easy for them a few weeks ago when he posted a video to his personal Twitter account of him posing for photos with a group of Navy Seals during his first military visit overseas, revealing both their location and their identities. If someone was managing his social media accounts or if he was forced to put his Twitter use on hold, this never would have happened. Then again, if he wasn’t such a moron then this wouldn’t have happened either.

4. Blocking People Is Against The Constitution

President Trump often boasts that his Twitter account is the best way to stay informed on current political issues and to get in touch with him. This kind of statement confirms that Trump is using his personal Twitter page as a public forum, which started to cause issues when he began blocking those who disagreed with him. According to the law, this infringes on their right to free speech and several Twitter users are seeking legal action and suing for their First Amendment rights. Considering how many people have been blocked, including many celebrities, this lawsuit can grow significantly. If only Trump had experienced and knowledgeable advisors around to prevent him from doing these kinds of things!

Trolling is common in all forms of social media, but in the past, the president has always had the strength to ignore negative comments. Unfortunately, Trump doesn’t have this quality and actually starts Twitter feuds on a regular basis. Anyone who even remotely criticizes his actions or appearance can become a target, leading to the president making headlines for all the wrong reasons. Distraction tactic or not, it’s not a good look for a political leader to be acting like an attention-crazed teenager.

When a president uses Twitter or any form of social media to communicate with the public, it gives the people behind the social platform far too much power. Remember when Trump’s Twitter account was deleted? It’s not just foreign terrorists who want to hack the president’s social media pages. Your average employee in charge of monitoring accounts could have some fun with it, not to mention the power it gives those who run these companies. Tweets can be removed or altered, entire accounts can be deleted, and so much more to control what the public does and doesn’t see.

Twitter may have increased the length of posts, but there’s only so much that can be said in 280 characters. Of course, Trump loves to write lengthy blocks of text that continues from one post to the next, but this is hardly the best way to communicate with people. Not to mention the fact that his poor grammar has led to confusion in the past. As the president of the United States, millions of people find updates on major political issues on his Twitter pages, most of which should have been announced by reading a professionally written statement during a press briefing. Instead, the public is going to his social media for information (or should I say misinformation), many of whom are members of the press and the White House’s public relations professionals. His informal tweets aren’t thought out or even written with the education level most kids leave middle school with, and most of what Trump shares is just wrong. Not only does this cause confusion among citizens, but it’s a YUUUGGE waste of time for those working for the president who cleans up his messes.

While so many people are convinced that Trump should be banned from Twitter, I just think he should be prevented from discussing political issues on his personal account, hire a professional writer, and have an advisor designated to monitor everything he shares on his social media pages. Trump should be aware of how things like this work as he claims to be this successful businessman and these are all basic marketing procedures. There’s transparency and then there’s just unprofessional and Trump’s presidential brand is all about the latter.

A Complete List Of Everything Republicans Have Blamed On Democrats

Gift-giving isn’t just a seasonal affair between friends, families and acquaintances. The art of gift-giving is also conducted on a national scale with countries often sending each other big, weird and expensive gifts. Experts in all things gifts, Vanilla Reindeer put together some examples of these expensive and odd gifts that have been shared between… END_OF_DOCUMENT_TOKEN_TO_BE_REPLACED

There are lots of ways you can make Pres. Trump feel welcome: you can offer him coffee, or mow a penis into a field for him to view as his plane lands. The willie in question has been chopped by Born Eco ahead of the arrival of President Trump, who visited the UK Monday for… END_OF_DOCUMENT_TOKEN_TO_BE_REPLACED

The year isn’t even halfway over, yet Donald Trump has managed to make a fool of himself and our country countless times. From inviting the national college football champions, the Clemson Tigers, all the way to the White House for some McDonald’s to his to the dreaded results of Mueller’s investigation, it has been one… END_OF_DOCUMENT_TOKEN_TO_BE_REPLACED

Republicans have always said that when they gained control in Congress, they would work to overturn Roe v. Wade and here they are, cashing in on that promise one state at a time. So far, Alabama, Arkansas, Georgia, Kentucky, Missouri, and Ohio have all passed incredibly restrictive laws on abortions, making it illegal for women… END_OF_DOCUMENT_TOKEN_TO_BE_REPLACED

If you’re on Snapchat, then you’ve probably played around with (and were likely horrified by) their filter gender swap filters. While you’re probably using these filters to send hilarious pics to your friends, some guys using them to create Tinder profiles. What likely started out as a joke has quickly evolved, and these guys are… END_OF_DOCUMENT_TOKEN_TO_BE_REPLACED

“Milkshaking” is a hilarious trend in Britain where a milkshake is thrown at and ideally lands on a far-right politician or activist. The point of this nonviolence protest is to humiliate them without causing injury. Physical injury at least. There’s no doubt that milkshaking has led to a few bruised egos. Not only is this… END_OF_DOCUMENT_TOKEN_TO_BE_REPLACED