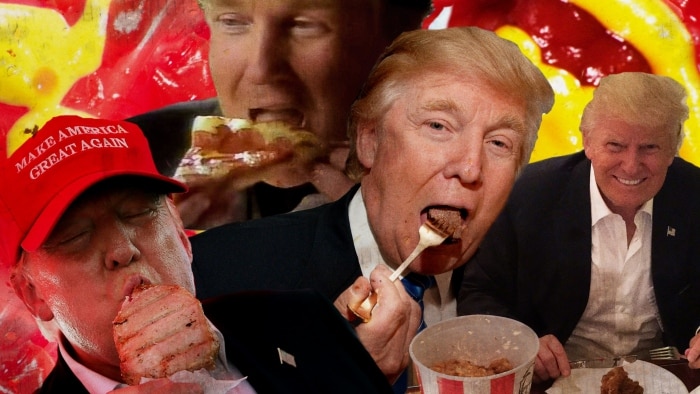 Donald Trump certainly seems to embrace American stereotypes. He’s arrogant, lazy, ignorant, and his gluttonous eating habits have provided us with nearly as much entertainment as his Twitter feed. Regardless of where you land on the political spectrum, these photos of Trump stuffing his face will have you in hysterics.

Look at that face! Nothing like a juicy cut of steak to get Trump in the mood. For what, it’s hard to tell. It’s safe to say that the president has never made this face in the presence of his wife. Stormy Daniels probably got a glimpse or two at it though.

You better believe that Trump ate that entire pie himself. No judgment, I’ve done it myself on numerous occasions. That side-eye he’s giving is just too good not share though. There must be a tray of stuffed cheesy bread over in the corner.

No matter how large a slice of pizza is, no true New Yorker eats it with a fork and knife. Either Trump didn’t get the memo or he’s attempting to humor Sarah Palin who appears to have never seen pizza before him her life.

Everything tastes better when it’s put on a stick. Chicken, beef, donuts. It presents eating as an entirely new experience like pole dancing did for exercise, and you just can’t help but give it a try. At least his facial expression in this photo makes his MAGA hat look slightly less ridiulous.

There’s nothing better than a game night hot dog, and by the sight of Trump’s borderline grotesque tongue action here he probably feels the same. On the plus side, the sight of these two sitting courtside devouring their footlongs likely inspired the players to keep it in their pants and call it an early night after the game. The Trumps just might have saved a few of those guys from years of baby-mama drama and child support payments.

6. An Ice Cream Trilogy Part One

Trump loves to eat food that comes on a stick, and ice cream is no exception. Along with his footlong hot dog, Trump seems to also enjoy something sweet while watching a game, inspiring this three-part love story. The saga begins with Trump’s most nauseating seduction move, as he uses his tongue to lure in his vict…err… love interest. Which, in this case, is a popsicle.

Once Trump has seduced his target to an appropriate level, which for him is roughly thirty seconds after he notices the popsicle’s ass, he just goes for it. Shoves the whole thing in his mouth, whether they want it or not. See, he’s a celebrity, so he can do whatever he wants.

Once Trump has his ice cream in his mouth, there’s no going back. It’s devoured in minutes, leaving behind a shaken and confused naked popsicle stick who will spend years in therapy trying to forget the ter.

A Complete List Of Everything Republicans Have Blamed On Democrats

Will Smith disclosed in a podcast interview recently that he would “consider” running for president “at some point.” In an interview released Monday, the 52-year-old rapper told Crooked Media’s “Pod Save America”: “I think for now I’ll let that office get cleaned up a little bit. And then I’ll consider that at some point down… END_OF_DOCUMENT_TOKEN_TO_BE_REPLACED

Vaccination programs are currently on roll-out and countries that vaccinated for COVID-19 are talking. Questions are everywhere, and it is building up people’s anxieties about vaccination. How has the vaccine affected their population? Are the vaccines any good? Should we research more on newer vaccines? Can the vaccines kill the mutated virus? The answers change… END_OF_DOCUMENT_TOKEN_TO_BE_REPLACED

Texas Senator, Ted Cruz, received heavy criticism after taking a vacation to Cancun with his family in the middle of a crisis. The latest power crisis in Texas left hundreds of homes without electricity and water for more than 48 hours in negative degree weather. This has left the lives of many Texas residents in… END_OF_DOCUMENT_TOKEN_TO_BE_REPLACED