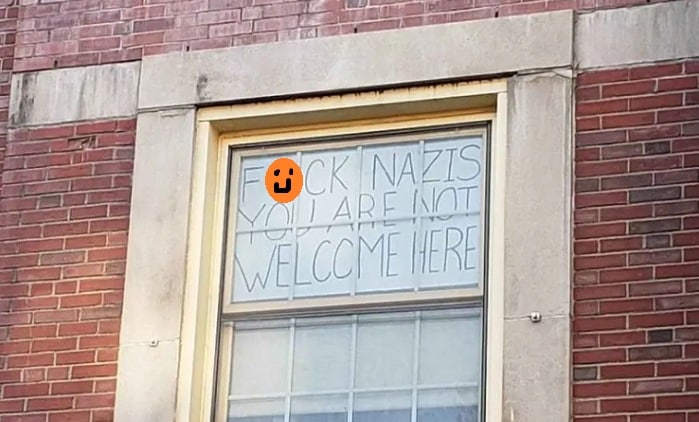 Inclusivity is all about harmony and equal rights to people of all skin colors and backgrounds. However, some backgrounds and groups are simply too destructive and go against the idea of inclusivity. Problem is, some authorities still think these groups are worth including, like what happened to one university where a student was asked to take down an anti-Nazi sign.

Nicole Parsons was a junior student at the University of Massachusetts-Amherst. She was becoming increasingly concerned over hate crimes taking place all over the campus such as a swastika being painted on a “Happy Hannukah” sign. So she put up a sign that says “f**k Nazis, you are not welcome here” on her dorm room’s window.

“I thought maybe if I hang the , maybe the person who drew the swastika will see it and see someone condemning their actions, even if the administration doesn’t do it,” said Parsons. To her surprise, it was the administration who took notice of her condemnation. They even asked her to take the sign down via email.

Apparently, the said email also stated that her sign has a negative impact on their community, “There are some in the community who have expressed that the sign should be taken down as it has created mixed emotions in the community on how to proceed, issues of inclusion, and the ability to be active members of their community,” said the RA, Eddie Papazoni.

Additionally, while Papazoni is compelling her to take down the sign, he did say that he was not forcing Parsons to do so. He also reasoned to Parsons that, “all students can be a part of an inclusive residential experience, as well as having a respectful environment to be a part of here on our campus.”

Needless to say, Parsons was disappointed since she sees this as the university being more concerned about the feelings of the trouble-making Nazis than solving the hate crimes. Still, the higher university officials backtracked on their email and claims that the said request should not have been sent. In the end, Parsons’ sign was allowed by the university.

Seems it was just like yesterday when we all fought over and hoarded HEAPS of toilet paper for no reason at all. All the memories are rushing in as the US suffers from a gas shortage. As expected, gas shortage memes are everywhere to bring light to our currently sad situation. Along the US east… END_OF_DOCUMENT_TOKEN_TO_BE_REPLACED

Israel’s Iron Dome has protected the country against missile attacks for years. The Iron Dome in Israel is the biggest of its kind in the world. No other countries in the world use the same air defense system, meaning it is one of a kind. The tension between Israel and Gaza has been going on… END_OF_DOCUMENT_TOKEN_TO_BE_REPLACED

The world is devastated by the news that Britain’s Prince Philip, the Duke of Edinburgh, has died at the age of 99. Palace media confirms that the Duke has expired mid-day today, April 9th. The announcement did not contain any specifics on the cause of death. The United Kingdom will enter a state of national… END_OF_DOCUMENT_TOKEN_TO_BE_REPLACED