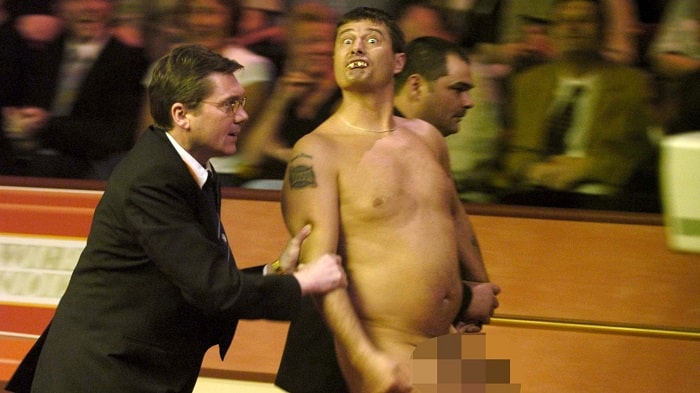 Art can be highly subjective and even polarizing at times especially when the artist has unconventional tastes. While plenty of critics do debate what art is all about, there is no doubt that the human body is art and it is to be admired. So, one man has made it his passion to show off his dad-bodily “art” in major sports events and he has done that 568 times.

53-year-old Mark Roberts from the Liverpool, UK takes pride in what he does during major sports events. You see, he has this penchant for running across sports fields butt-naked in front of thousands of spectators and both sports teams. This is called streaking. Roberts considers what he does as a form of performance arts. You might have seen him already:

In fact, some of Roberts’ biggest highlights are sports events such as the Super Bowl in the US and the Olympics. His goal? To “create something visual for people to laugh at.” It seems he succeeded. Still, Roberts actually only does streaking during game breaks so as not to disrupt the matches. He has stuck to this rule since his first streak back in Hong Kong in 1993. Since then, he followed this with streaking in 567 more sports events.

When he is not doing his performance art, he is being a painter and a decorator by day, meaning he really is an artist by heart. Despite having such a notorious streaking run, Roberts has actually been to court only 11 times and was convicted only thrice. Mostly it was for trespassing and his only punishment was just a $1,000 fine.

The world is devastated by the news that Britain’s Prince Philip, the Duke of Edinburgh, has died at the age of 99. Palace media confirms that the Duke has expired mid-day today, April 9th. The announcement did not contain any specifics on the cause of death. The United Kingdom will enter a state of national… END_OF_DOCUMENT_TOKEN_TO_BE_REPLACED

Who would have known that religious prophets would be among the most loyal supporters of former President Trump? In fact, it has been observed that the most conservative Christians may have been the right amount of push for Trump’s presidential win back in 2016. Since Trump’s election back in 2016, numerous self-proclaimed “prophets” have been… END_OF_DOCUMENT_TOKEN_TO_BE_REPLACED

President Biden falls and slips multiple times on the Airforce One Steps and PEOPLE ARE GOING CRAZY! What’s the big deal? Some people are hating, while others are making memes just for the fun of it. We are all human, aren’t we? Everyone’s expected to stumble some time in their lives. However, with the internet… END_OF_DOCUMENT_TOKEN_TO_BE_REPLACED