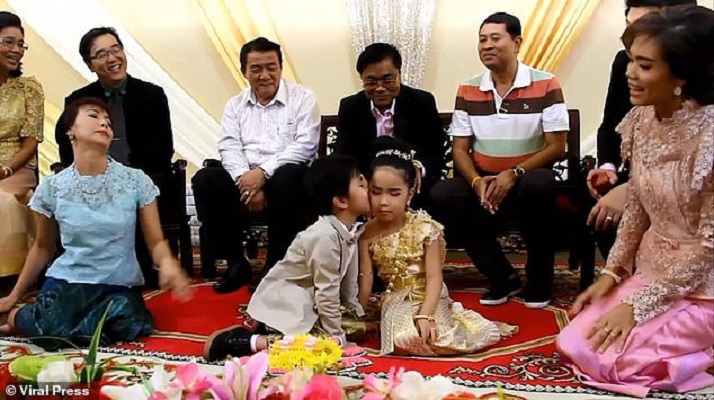 Incest is generally considered as one of the worst taboos ever because really, why would you even…? Even nature penalizes mammals who resort to incest with genetic anomalies. It can be revolting for human beings to try to justify incest… but no, not for some Buddhist priests in Thailand. They actually wed twins because they believed the two were past lovers.

A six-year-old boy nicknamed Guitar and his twin sister nicknamed Kiwi just got married. That’s not something you hear every day, but it happened in Bangkok, Thailand. The two were born back in 2012 and apparently, they were special because the local Buddhist priests believed that the twins had “karma” being past lovers in their previous lives and have been re-born together where that “debt” has not been settled.

Basically, from the moment they were born, their parents actually groomed and conditioned them for marriage to each other. All because of a Buddhist belief. The priests even warned the parents that if the two were not to wed as soon as possible, they might experience some bad luck in the future.

As you can see, even the whole town was into it. The wedding ceremony was indeed lavish and even cost thousands of dollars. Here they are:

“The reason for the marriage ceremony is because we believe that both the children used to be partners in the past life. This is a belief we have inherited from ancient people. We must arrange a wedding for the two twins as a solution to the issues they had before they were re-born. If they are married, they will live healthy and successful lives and not be sick,” said , their father.

Still, the said wedding and marriage was not legally binding and the twins will still be able to seek out and prefer their own respective partners when they are older. Apparently, they just did it to avoid bad luck and to fix the “karma” of the twins as past lovers, as per the Buddhist’s warnings.

Just this week, lawmakers approved a bill establishing the District of Columbia (D.C.) as the 51st state of the United States of America. This is after multiple calls and protests from the citizens to finally consider D.C. as a state.  However, the bill is not out of the woods yet as it faces multiple oppositions… END_OF_DOCUMENT_TOKEN_TO_BE_REPLACED

John Bolton’s new book entitled ‘The Room Where it Happened’ had been stirring up quite the attention since it was announced for release last week. Officially released only June 23, the new book seems to threaten the Trump administration as there had been moves to get it unpublished. The request was later on turned down… END_OF_DOCUMENT_TOKEN_TO_BE_REPLACED

Learning about the Juneteenth Holiday The Juneteenth holiday, celebrated every 19th of June, is a commemoration of the liberation of enslaved African-Americans in the United States. It was on the 19th of June 1865 when Union Army General Gordon Granger announced General Order No. 3 in Galveston, Texas officially emancipating slaves in the entire state.… END_OF_DOCUMENT_TOKEN_TO_BE_REPLACED