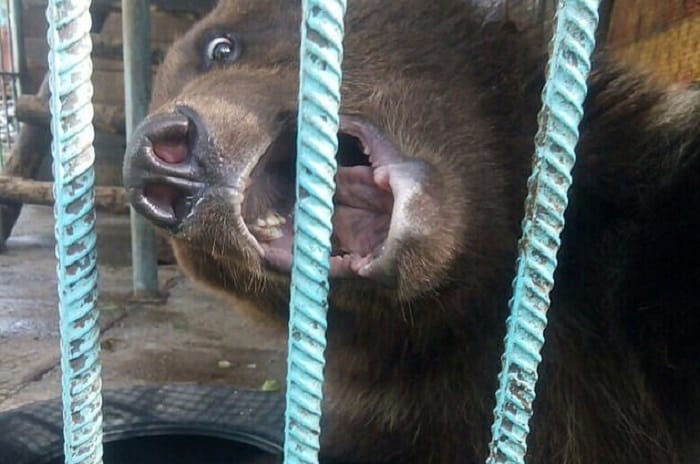 Christmas accidents can be devastating especially since the victim tends to be reminded of it on that specific date. Sadly, they do tend to happen a lot because people are usually drunk this time of the year and plenty of Christmas parties involve booze. Much to the misfortune of one Russian woman whose arm was torn off by a brown bear.

The mishap took place in a guest house in the Russian city of Achinsk. The said guest house apparently kept a big brown bear caged for the of the visitors, especially during a party. Everything was fine until a 53-year-old woman who was apparently tipsy or drunk boasted and tried to feed the brown bear through the cage.

While her arm was outstretched, the brown bear wrenched it off and took it inside his cage. Afterward, the said bear ate the woman’s severed arm while the party-goers rushed her to the hospital as she bled. Other guests said they usually fed the bears using sticks.

“We have often fed those bears ourselves. We used a stick provided there to push the treat towards the cage. Sometimes the bears open their mouths just like hippos and you can throw an apple right into it. They are very smart, stretching their paws waiting for treats,” said one of the guests.

The said woman is now in intensive care where she underwent extensive blood loss and emergency surgery for the stump of her arm. Meanwhile, the bear will apparently not be put down despite the incident and the said guest house is finally making plans to release them after defying an earlier police order to free the brown bear.

The moment he was inaugurated, immediate changes made by Biden made headlines across the country. These are many of the controversial issues and topics that were shunned and ridiculed by the former administration. Americans can finally breathe a sigh of relief that these concerns have finally reached government policies. It seems clear that Biden has been… END_OF_DOCUMENT_TOKEN_TO_BE_REPLACED

Presidential pardons are one and many in the history of the US. There are many times when US Presidents granted reprieves for their citizen’s misdeeds. The US President may grant a pardon for any individual, including himself, for any crimes done against the country and its citizens. This issue of Presidential pardons has been trending… END_OF_DOCUMENT_TOKEN_TO_BE_REPLACED