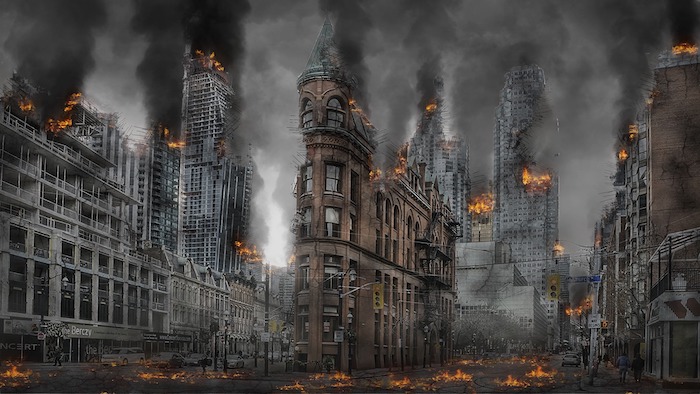 It’s that special time of year once more when families travel miles to be with one another to swap stories, cuddle in front of a fire, and drink too much to drown out the sound of your parents’ endless criticism. Sincerely, it’s the most magical time of the year.

This holiday season, however, is unique, because by this time next year, when we cuddle in front of the fire, it’ll probably be blazing in a trash can, we’ll be surrounded by strangers and huddled in the burned-out remnants of our once-great nation.

Cherish your fond memories of this year, folks, because you’ll be sharing next year’s Christmas dinner with some friendly cannibals and a pile of roaches.

In Kenya, giraffes have been classified as “critically endangered.” Across the world, two species of the six species of giraffe are on their way out the door.

Which, is no less than they deserve, the crafty bastards.

An Asshat Is Still in Charge of the Nation

And he will be through the 2020 election, at a minimum. Sure, some betting sites put his chances of impeachment at 3-to-1 (Clinton only ever hit 6-to-1 odds, and he was actually impeached), but don’t count on a sluggish House of Representatives to get moving on that goal before 2020.

So, in 2019, you can expect a whole lot of hot air from angry Democrats, but probably not much in the way of real action. You know, just like always.

Not Only Is That Asshat Still in Charge, but Almost Half of America Thinks He’s Doing a Bang-up Job

Yeah, 40 percent of the population. Hell, 40 percent is wildly conservative. Trumpians love that shit bird. So, not only is Trump not getting impeached, he might win again in 2020. You know, assuming the nation hasn’t been plunged into a nightmare from which we can never escape.

The Government Is Going to Shut Down

If the House and the Senate can’t get their shit together, the government will get shut down, part now, and the rest in the new year. Why, you ask? Because some cock-tard living in the White House is just adamant that the United States build a two-thousand-mile-long concrete wall between us and Mexico.

But, it’s cool, because I’m pretty sure Mexico is going to hit us back with the difference.

That Migrant Caravan? Not Going Anywhere

Presumably, the plan is to get the funding for the wall — Democrats have already freed up $5 billion as part of a stupid, stupid compromise — and get that bad boy built before the migrant caravan gets too restless in the tent cities they’re currently occupying.

Knowing what little I do about efficiency in the government, I have to say the Trump plan sounds pretty foolproof.

The Economy is About to Tank

Right now, Trump’s shenanigans get a lot of leeway from his fans because the economy is going gangbusters. In Republican world,  it’s okay for a guy to be a gigantic dickhead so long as their bank account is swollen like a steroid case hitting the gym.

That comfort is just temporary, though. In 2019, things will take a turn for the worse, before really hitting the crapper in 2020.

In words of the former chair of the Federal Reserve Ben Bernanke, “In 2020, Wile E. Coyote is going to go off the cliff and look down.”

The Trade Bullshit With China Is Just Going to Get Worse

As one source told Politico, “It is very unlikely that the US and China will reach an agreement on trade issues by their agreed deadline of 1 March; the more likely scenario is extended negotiations that last through the first half of the year as … Trump and Xi … try to avoid further escalation without making deep concessions.”

Translation: it’s going to take, like, six months for Chinese president Xi Jinping to finagle something substantial out of Trump without pissing him off like the impudent child he is.

Syria Just Got the Worst Christmas Present Ever

In a surprise move, Trump announced that he would withdraw American troops from Syria in 2019. And that’s cool, why not tip the balance of power in the Middle East toward Russia? And why should it matter that Trump only did it after a conversation with a notorious dictator?

Even the co-host of Trump power hour Fox & Friends said of Trump’s decision: “He also is doing exactly what he criticized President Obama for doing. He said President Obama is the founder of ISIS. He just refounded ISIS because they have 30,000 men there and they are already striking back with our would-be evacuation. The president is really on the griddle with this.”

So, we’ve got increasingly organized terrorist armies to look forward to, that’s fun!

There Is No Secretary of Defense, No Confirmed Attorney General or EPA Head, and the White House Chief of Staff has Less Than a Month on the Job

It kind of reminds me of a company that I used to work for. Whenever an exec would leave their work was gifted to some underling who received neither a promotion nor a pay raise. They just got more crap to do. It was the best.

Until the place went tits up … for some reason …

The world is devastated by the news that Britain’s Prince Philip, the Duke of Edinburgh, has died at the age of 99. Palace media confirms that the Duke has expired mid-day today, April 9th. The announcement did not contain any specifics on the cause of death. The United Kingdom will enter a state of national… END_OF_DOCUMENT_TOKEN_TO_BE_REPLACED

Who would have known that religious prophets would be among the most loyal supporters of former President Trump? In fact, it has been observed that the most conservative Christians may have been the right amount of push for Trump’s presidential win back in 2016. Since Trump’s election back in 2016, numerous self-proclaimed “prophets” have been… END_OF_DOCUMENT_TOKEN_TO_BE_REPLACED

President Biden falls and slips multiple times on the Airforce One Steps and PEOPLE ARE GOING CRAZY! What’s the big deal? Some people are hating, while others are making memes just for the fun of it. We are all human, aren’t we? Everyone’s expected to stumble some time in their lives. However, with the internet… END_OF_DOCUMENT_TOKEN_TO_BE_REPLACED