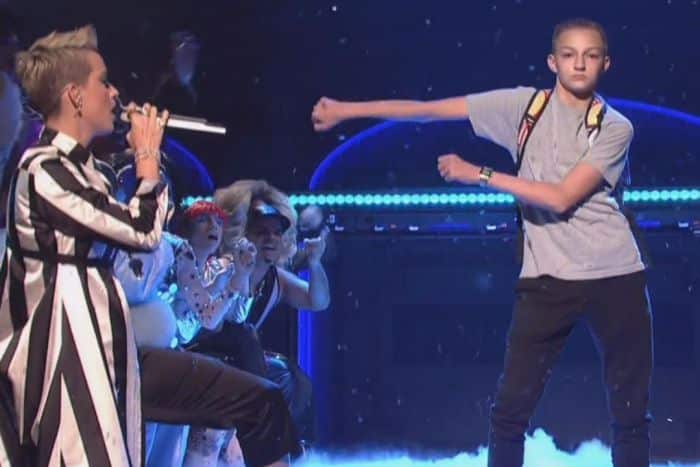 Having extreme popularity is bound to draw proportionally extreme hate as well, it’s all relative and inevitable. Fortnite: Battle Royale is one example of this since the developers are now being sued left and right by artists and trendsetters for “using” their dance moves via in-game emotes. This time around, the “Backpack Kid” is suing Fortnite for “his” Floss Dance.

Teenager Russell Horning, also known as Backpack Kid, became a viral sensation when he performed his signature Floss Dance after Katy Perry invited him in one of her SNL performances. Fortnite recently incorporated the Floss Dance in one of their game emotes. They even named it “Floss” and has the same exact moves that Horning performed.

Horning’s mother was not pleased with this move from Epic Games, developer of Fortnite. His mother perceived this as the developers making money off of Horning’s trend because “Floss” from Fortnite was sold as part of the Premium Battle Pass package which players had to buy with real money. So they sued Epic Games:

Apparently, Horning is staying away from the legal side of things because he’s “just a kid” and lets his mother and a lawyer take point. While Horning does prefer that Epic Games pay him for his dance moves, he admitted that it’s “not that big of a deal” and that he is even glad it is in the game.

Still, this is not the first time Fortnite has been sued regarding a dance move. Celebrity Alfonso Ribeiro has also sued Epic Games recently for using his “The Carlton” dance move. Epic Games is simply not going to be able to just dance this one off.

How did he die? An African American man, George Floyd, 46, was killed by Minneapolis Police officers. Floyd was being investigated for forgery. George Floyd’s death was caused by a police officer holding him down on the ground with a knee on his neck. He was not shot to death but instead strangulated. Now, his family… END_OF_DOCUMENT_TOKEN_TO_BE_REPLACED

The Blood Test, The Swab Test, and The Saliva Test      Essentially, there are three general types of COVID-19 testing produced so far. One is the rapid test, the second is the saliva test and the other is the swab test. The rapid test (also known as the anti-body test) uses blood samples. The swab test… END_OF_DOCUMENT_TOKEN_TO_BE_REPLACED

The COVID-19 pandemic is one of the biggest modern pandemics known in history. Currently, there are more than five million confirmed cases in the world, with a total of 333,000 deaths. A total of 1.6 million of these confirmed cases are in the US alone. The world is currently in a race of finding a… END_OF_DOCUMENT_TOKEN_TO_BE_REPLACED

Despite concrete data and research, people’s opinions will always be diverse when it comes to a variety of topics including religion, politics, gender, and more. Denial is a common reaction to many important discussions and serious world events. The COVID-19 pandemic does not differ from any issues and is subject to opinions from critiques all… END_OF_DOCUMENT_TOKEN_TO_BE_REPLACED

Back in January, when the Wuhan, China coronavirus broke out, it didn’t make it to the front page of newspapers, in print or virtual form. Today, January feels like a lifetime away. Like it or not, people around the world have adapted to the new normal – staying at home, frequent hand washing, and social… END_OF_DOCUMENT_TOKEN_TO_BE_REPLACED

Since the beginning of the year 2020, the whole world has been stupefied by the rapid spread of a deadly coronavirus known as COVID-19. World superpowers in the West were unable to prevent the virus from reaching their borders. Because of this fact, the novel coronavirus COVID-19 became a world-wide pandemic no less than three… END_OF_DOCUMENT_TOKEN_TO_BE_REPLACED