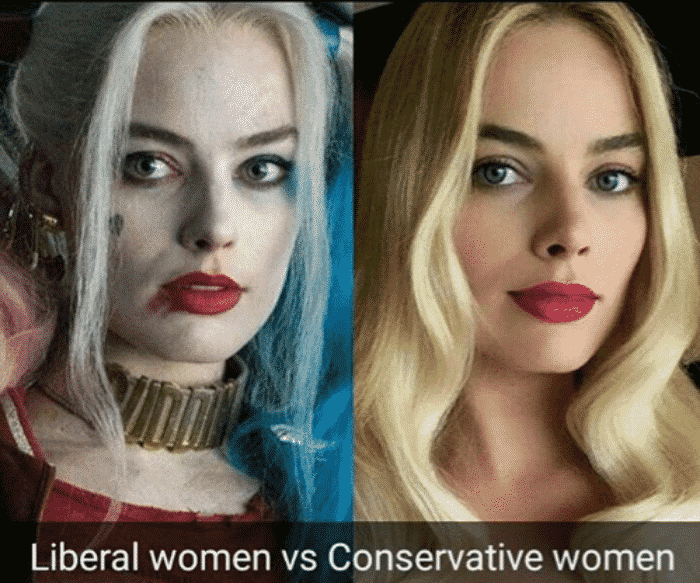 Stereotypes are fun, especially when they’re kind of true. The far-left and the far-right both demonstrate the most extreme viewpoints at each end of the political spectrum. To say that they tend to go too far and lack something I like to call common sense is an understatement. Let’s take a look at photos that best represent conservative and liberal stereotypes.

Conservatives vs. Liberals On Complaining

Conservatives are all racists and liberals are only good for whining about political issues. As if conservatives don’t sit around complaining about immigrants stealing the jobs no one wants and some of the country’s biggest activists aren’t liberals. Next.

Conservatives vs. Liberals On Abortion

If you’re on the right side of the political spectrum, then you’re all about sticking convicted murderers on death row and taking the freedom of choice away from pregnant women. Those on the left think the opposite, however, neither side seems to understand that a person who murders others is a danger to society. A woman with an unwanted child who chooses to have an abortion is actually beneficial to society. It’s one less kid thrown into the system. One less homeless person on the streets. One less neglected child turned criminal. One less addition to a country that is already overpopulated. We may be an intelligent species but in the we’re still just animals and population control is an essential part of our survival. That’s just my opinion though.

Conservatives vs. Liberals On Women’s Rights

Conservatives are all about keeping the control in the hands of a bunch of old white men who have no one’s needs in mind other than their own. They stay rich and powerful while the rest of us suffocate at this thing called life. Liberals, on the other hand, are all about equality. Imagine a world where black and white people received the same prison sentences for the same crimes. Or a world where women had control over their reproductive rights. Wouldn’t that be nice?

Conservatives vs. Liberals On Spreading The Wealth

Conservatives are all about allowing the rich to get richer while the poor get poorer. They think that they got where they are in life because they’ve worked hard when in most cases it’s really because society associates white men with power and CEO positions. Liberals simply don’t think it’s fair that most of a country’s wealth is in the hands of one percent of the population while people are literally dying because they can’t afford health insurance and living on the streets.

Conservatives vs. Liberals On Degrading Women

Conservatives vs. Liberals On Gun Control

America is the only civilized country that has to deal with mass shootings nearly on a daily basis. Conservatives just refuse to allow gun laws to change, even if it means saving lives. Liberals are portrayed as wanting to gather up everyone’s gun and melt them all down for peace signs. If all these other countries can figure out how to prevent people from getting into clubs, concerts, and schools with assault riffles intending to murder as many people as possible, then we could too if we wanted to. The truth is, all of these old white men in charge prefer that cash inflow from the NRA.

Together with the fireworks for the Independence Day weekend, the latest explosive Hollywood news involves no one else but the controversial Kanye West. The famous celebrity has revealed his plans for a presidential run. Originally planned for 2024, he has stated that he is actually going to run for the 2020 Presidential elections in November. The… END_OF_DOCUMENT_TOKEN_TO_BE_REPLACED

Recent trends have reported that K-pop fans in the US are getting mixed in with current issues in politics. K-pop fan communities are using online platforms to rally up and protest against racism in the United States. In support of the #BlackLivesMatter movement, the online K-pop community has come together in protest. Never has it… END_OF_DOCUMENT_TOKEN_TO_BE_REPLACED