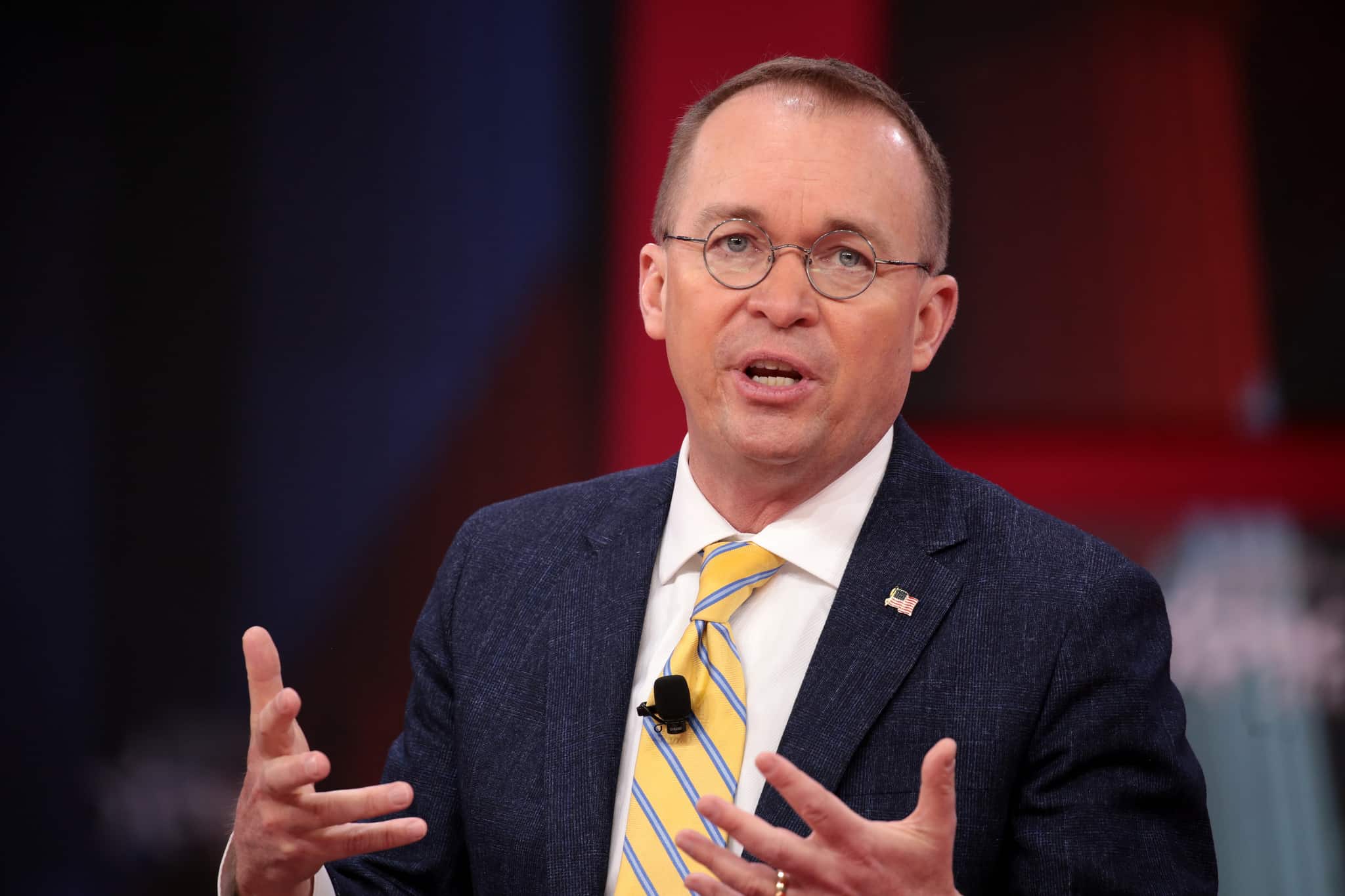 After a few days of speculation, the bottle has stopped spinning on Trump’s new chief of staff. The man destined to endure a wet, sloppy kiss from Donald Trump is Mick Mulvaney, head of the Office of Management and Budget and a former representative from South Carolina.

I am pleased to announce that Mick Mulvaney, Director of the Office of Management & Budget, will be named Acting White House Chief of Staff, replacing General John Kelly, who has served our Country with distinction. Mick has done an outstanding job while in the Administration….

In accepting the dubious job offer, Mulvaney becomes Trump’s third chief of staff in under two years, which means he beat President Obama by a full calendar year. Presumably, when Trump criticized Obama back in 2012, he was carping about how slowly Obama had moved to swap out advisors.

3 Chief of Staffs in less than 3 years of being President: Part of the reason why @BarackObama can't manage to pass his agenda.

But, I digress, the topic at hand is the new chief of staff, an unfortunate dill hole who just might make John Kelly look like a reasonable individual.

Who Wants to Be Handcuffed to an Anchor That Just Got Tossed in the Ocean? Anybody?

Except for the soul-crushing stress involved, being the chief of staff is typically considered a sweet job. It’s an unelected position beholden only to the most powerful person on the planet. They control the President’s schedule, negotiate deals with allies and opponents, and, in the words of The New York Times, “translates the president’s goals into reality [and] manages not only the leader of the free world but how he wields the power of a massive government bureaucracy.”

Sounds dope, right? Well, when you’re dealing with a megalomaniacal toddler like Donald Trump, the job takes on ass aches of unprecedented proportions. Before Mick Mulvaney officially accepted the position as chief of staff, Trump was turned down (quite publicly) by up-and-comer Nick Ayers, a man who wanted to get away from the job so badly that he not only said, “no,” he quit his job as chief of staff for VP Mike Pence. Being Trump’s chief of staff is such a thoroughly frightening prospect that Ayers preferred to abandon the career he’d been pursuing his entire professional life rather than plot ways to convince Trump to pay attention during security briefings.

Not only was Ayers departure a swift kick in the nuts to the Trump administration, but it was also pretty damn embarrassing for Ivanka Trump and her husband, Jared Kushner. Up to that point, the White House rumor mill spun tales that Ayers was the diabolical duo’s favorite to replace John Kelly. Then, Ayers opted out. Then another candidate said no. Then another.

For the record, there were MANY people who wanted to be the White House Chief of Staff. Mick M will do a GREAT job!

In that context, ol’ Mickey M might be the most weak-willed person in Washington.

For what it’s worth, Mick Mulvaney seems like a genuine person. A genuine conservative whacko who’s super proud of his life choices. Just take this little anecdote from Politico in which Mulvaney bragged about duping the President into cutting $70 billion from the Social Security Disability Insurance program just by using the buzzword “welfare.”

Yes, tricking Donald Trump is easier than getting a show greenlit on Netflix, but it’s telling that Mick Mulvaney is so confident in his political prowess that he bragged about manipulating Trump. Here’s a guy with a very conservative agenda, the balls enough to pursue it, and the three brain cells required to make it happen.

In his third term in the House, Mulvaney founded the Freedom Caucus, a gang of old white men who roam around Capitol Hill grumbling about funding abortions for teenage sluts.

The ultra-conservative group has a tumultuous affair with Trump. Last March, Trump had some harsh words for the Freedom Caucus:

The Freedom Caucus will hurt the entire Republican agenda if they don't get on the team, & fast. We must fight them, & Dems, in 2018!

In the year since, however, it’s been Trump climbing on board the freedom train. Thanks to the power the Caucus commands in the House, Trump has had the freedom to strip his administration of anything approaching a liberal idea (https://fivethirtyeight.com/features/how-the-freedom-caucus-learned-to-love-trump/).

Ripping the Government to Shreds

As the head of the OMB, Mulvaney submitted not one, but two budgets that seemed determined to strip funding for stupid stuff like Medicare, Medicaid, Social Security, the State Department, the Environmental Protection Agency, and more.

He calls his plan “Taxpayer First.” If he could, the guy would have policemen stick you with a bill whenever they stopped crime in your vicinity.

To his credit, Mulvaney has never shied away from his support for the president. Throughout the 2016 campaign, Mulvaney was adamant that Trump was the man for the job. Well, more accurately, he was adamant that Hillary wasn’t fit to govern. In his defense, he could have been right about that.

“Yes, I am supporting Donald Trump,” he once said, “but I’m doing so as enthusiastically as I can, given the fact that I think he’s a terrible human being, but the choice on the other side is just as bad.”

In the same interview, he said Trump’s behavior in the past should disqualify him from serving in office.

There’s a New Power in the White House

Nancy Pelosi Is Pulling a Hillary Clinton, and It Kind of Sucks

The world is devastated by the news that Britain’s Prince Philip, the Duke of Edinburgh, has died at the age of 99. Palace media confirms that the Duke has expired mid-day today, April 9th. The announcement did not contain any specifics on the cause of death. The United Kingdom will enter a state of national… END_OF_DOCUMENT_TOKEN_TO_BE_REPLACED

Who would have known that religious prophets would be among the most loyal supporters of former President Trump? In fact, it has been observed that the most conservative Christians may have been the right amount of push for Trump’s presidential win back in 2016. Since Trump’s election back in 2016, numerous self-proclaimed “prophets” have been… END_OF_DOCUMENT_TOKEN_TO_BE_REPLACED

President Biden falls and slips multiple times on the Airforce One Steps and PEOPLE ARE GOING CRAZY! What’s the big deal? Some people are hating, while others are making memes just for the fun of it. We are all human, aren’t we? Everyone’s expected to stumble some time in their lives. However, with the internet… END_OF_DOCUMENT_TOKEN_TO_BE_REPLACED