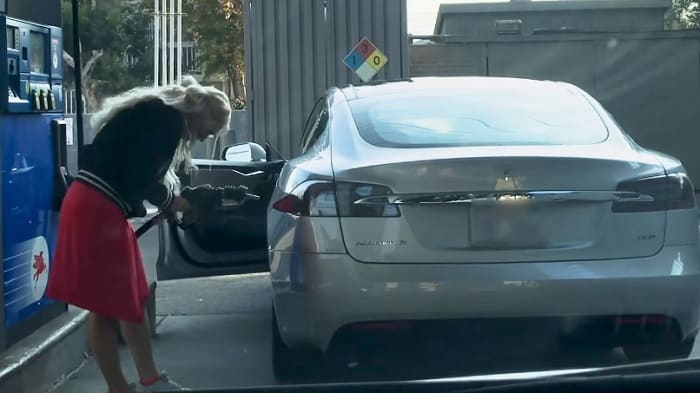 Tesla cars have been around for years now and still, they are nowhere near as available or widespread in use, probably because of the price tag. As a result, not many people are keen on having one and not many people know how it works. We do have one down-to-Earth example and it involves an American woman trying to refuel her Tesla car… in a gas station.

One regular Saturday in the US got a lot more interesting for some motorists at a gas station. Apparently, something was causing quite a long waiting time at a self-service refuelling station. It was a blonde woman having trouble filling up her car. Upon closer inspection, however, it appears her automobile was a Tesla car. Here’s the video:

It was only uploaded just this Saturday and it already blew up to a whopping 11 million views. People  just as amused as the driver behind the said blonde woman who took the video at the gas station. You can even see her frantically searching for the fuel tank of the car everywhere until she just gave up and called someone.

The driver after her clearly had a field day with her ineptitude at operating a Tesla car. Of course, it could have just been borrowed but one would think that the lender would at least mention that it is an electric car, those things have been around for quite a while now.

Some did question the authenticity of the video seeing as the girl’s blonde locks appear too coincidental with her lack of knowledge to be authentic. Regardless, now we all know that Tesla cars don’t take gas, thank you, blonde Tesla driver.

Dune Buggy Modified With a Tesla Motor Is INSANE!

The Blood Test, The Swab Test, and The Saliva Test      Essentially, there are three general types of COVID-19 testing produced so far. One is the rapid test, the second is the saliva test and the other is the swab test. The rapid test (also known as the anti-body test) uses blood samples. The swab test… END_OF_DOCUMENT_TOKEN_TO_BE_REPLACED

The COVID-19 pandemic is one of the biggest modern pandemics known in history. Currently, there are more than five million confirmed cases in the world, with a total of 333,000 deaths. A total of 1.6 million of these confirmed cases are in the US alone. The world is currently in a race of finding a… END_OF_DOCUMENT_TOKEN_TO_BE_REPLACED

Despite concrete data and research, people’s opinions will always be diverse when it comes to a variety of topics including religion, politics, gender, and more. Denial is a common reaction to many important discussions and serious world events. The COVID-19 pandemic does not differ from any issues and is subject to opinions from critiques all… END_OF_DOCUMENT_TOKEN_TO_BE_REPLACED

Back in January, when the Wuhan, China coronavirus broke out, it didn’t make it to the front page of newspapers, in print or virtual form. Today, January feels like a lifetime away. Like it or not, people around the world have adapted to the new normal – staying at home, frequent hand washing, and social… END_OF_DOCUMENT_TOKEN_TO_BE_REPLACED

Since the beginning of the year 2020, the whole world has been stupefied by the rapid spread of a deadly coronavirus known as COVID-19. World superpowers in the West were unable to prevent the virus from reaching their borders. Because of this fact, the novel coronavirus COVID-19 became a world-wide pandemic no less than three… END_OF_DOCUMENT_TOKEN_TO_BE_REPLACED

For months since the start of 2020, the attention of the world has focused on immediate response efforts to contain and combat the novel coronavirus, also known as COVID-19. The deadly virus has pushed millions of people into isolation.  This kept people in their homes for weeks and months away from their work, their friends,… END_OF_DOCUMENT_TOKEN_TO_BE_REPLACED