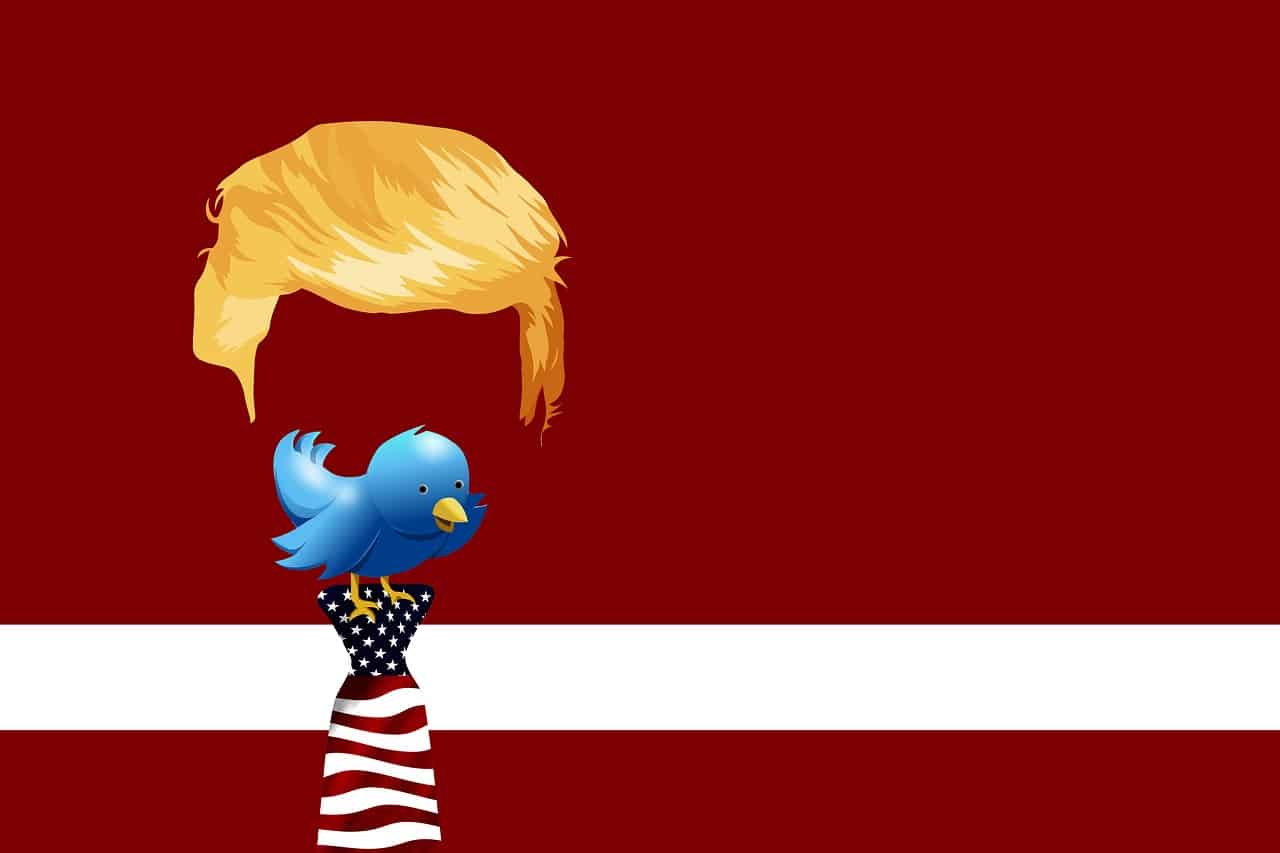 Trump has always been a big fan of superlatives. At the very least, we can be confident that no one has done more than him to damage the English language. Even saying the world “best” at this point conjures images of his mashed-potato face sneering into a microphone before a crowd of cheering yokels.

Trump likes to say that he is the “biggest” supporter of free speech. Just like how he’s said “no one has done more for veterans,” or how he claims to be the “most productive president ever,” barring FDR, for some reason. Not that any of this is even close to true. You need not look further than Trump’s own Twitter account to verify this.

Trump certainly uses his free speech rights as extensively as he possibly can. He might even be accused of pushing the boundaries of acceptable speech for the president. There’s little he holds back on, including things that are brushing up against the boundary of legality. Just this week, he just about ordered the Federal Reserve to take a certain course of action. If you don’t know, the Federal Reserve has been a quite independent branch of government, and it’s a good thing, too. The Fed basically runs the value of the dollar, and if Trump was in charge of that, I can only imagine the financial apocalypse we’d be suffering through today.

I hope the people over at the Fed will read today’s Wall Street Journal Editorial before they make yet another mistake. Also, don’t let the market become any more illiquid than it already is. Stop with the 50 B’s. Feel the market, don’t just go by meaningless numbers. Good luck!

Trump is all too happy to trumpet his absolutely bullshit ideas at the top of his little Twitter lungs. If you ask him, however, turnabout is not fair play.

Just recently, he took to Twitter to ponder aloud the legality of a newspaper criticizing him. If you’ve attended the second grade, you likely know the answer to this semi-rhetorical question: newspapers are free to criticize Trump to their heart’s content.

For them to slander him from a legal perspective, they would need to knowingly publish lie for the purpose of ruining Trump’s image. The irony here is that no one has done more to damage Trump’s image that Trump himself.

Because Trump is constitutionally unable to understand that he has flaws of any kind, he automatically assumes that any critical press coverage is either “FAKE NEWS” or “unbelievably biased.” Of course, it’s rare that he’s correct about this, but even a broken clock is right twice a day. The law of large numbers provides that, if he calls everything fake news, he will eventually be correct. Whether or not his labeling has been accurate thus far would require a detailed study of his tweets, which would be a largely sickening endeavor that we can’t in good faith ask anyone to undertake, even for the good of the country.

A REAL scandal is the one sided coverage, hour by hour, of networks like NBC & Democrat spin machines like Saturday Night Live. It is all nothing less than unfair news coverage and Dem commercials. Should be tested in courts, can’t be legal? Only defame & belittle! Collusion?

You might think that it’s unbelievably petty and childish to lash out at Saturday Night Live, the variety show that frequently satirized politicians from all over the ideological spectrum. You’d be right: no other president has been dumb enough to go after a comedy show, even in a tweet. And considering that Saturday Night Live is pretty bad these days, he’s not even taking aim at a reasonable target. It’s like going after the local weekly paper for running an AP wire story. What’s the point of trying to skewer such a small fish?

There is actually an answer to that question: Trump is pathologically incapable of accepting criticism. Thanks to his unbelievably thin skin, he takes literally every insult right on the chin. His glass jaw is his entire sense of his own self-worth, and never before has a president been so obviously, pathetically vulnerable to emotional manipulation at the hands of comedians, the press, and foreign powers. It’s like insulting a child in the schoolyard: they have no idea how to respond. They lack the life experience to brush off the insult, and it’s quite possible this is the first time they’ve been purposefully insulted.

Of course, SNL’s parody of Trump was not the first time he’s been insulted. It’s not even the first time that SNL has been critical of the President. But for Trump, every time is like the first time. Everything is personal, and unless he claps back on Twitter, he doesn’t feel like much of a man at all. The irony is that his constant, petty squabbles do far more to make him look week and childish than simply ignoring his critics like a grown-up would.

It’s part of the president’s job to act as the avatar of America. Citizens project their hopes and hatreds onto the President, and part of his role as the country’s leader is accepting those projections. If people want to make fun of him, insult him, burn him in effigy, it’s his job to smile and take it. The less affected you are by the critical commentary, the more respect people will have for you. Obama was excellent at that. Despite getting absolutely pummelled by insane and utterly untrue criticism by none other than Donald Trump himself, he took it in stride and made a crack or two himself. Just look at him killing it as he reads mean tweets about himself:

When you lead the country, you are the most visible member of that country. You represent the country, both at home and abroad. You get a target painted on your forehead that doesn’t come off until you leave office, and you just gotta accept that. You can’t let dumb things get under your skin, or you’ll have no energy to care about the important stuff. Consider, if you will, how much energy Trump has for anything other than whiney Twitter feuds. His utter inability to let insults pass tells you exactly how much value he has in his heart: none whatsoever.

Gift-giving isn’t just a seasonal affair between friends, families and acquaintances. The art of gift-giving is also conducted on a national scale with countries often sending each other big, weird and expensive gifts. Experts in all things gifts, Vanilla Reindeer put together some examples of these expensive and odd gifts that have been shared between… END_OF_DOCUMENT_TOKEN_TO_BE_REPLACED

There are lots of ways you can make Pres. Trump feel welcome: you can offer him coffee, or mow a penis into a field for him to view as his plane lands. The willie in question has been chopped by Born Eco ahead of the arrival of President Trump, who visited the UK Monday for… END_OF_DOCUMENT_TOKEN_TO_BE_REPLACED

The year isn’t even halfway over, yet Donald Trump has managed to make a fool of himself and our country countless times. From inviting the national college football champions, the Clemson Tigers, all the way to the White House for some McDonald’s to his to the dreaded results of Mueller’s investigation, it has been one… END_OF_DOCUMENT_TOKEN_TO_BE_REPLACED

Republicans have always said that when they gained control in Congress, they would work to overturn Roe v. Wade and here they are, cashing in on that promise one state at a time. So far, Alabama, Arkansas, Georgia, Kentucky, Missouri, and Ohio have all passed incredibly restrictive laws on abortions, making it illegal for women… END_OF_DOCUMENT_TOKEN_TO_BE_REPLACED

If you’re on Snapchat, then you’ve probably played around with (and were likely horrified by) their filter gender swap filters. While you’re probably using these filters to send hilarious pics to your friends, some guys using them to create Tinder profiles. What likely started out as a joke has quickly evolved, and these guys are… END_OF_DOCUMENT_TOKEN_TO_BE_REPLACED

“Milkshaking” is a hilarious trend in Britain where a milkshake is thrown at and ideally lands on a far-right politician or activist. The point of this nonviolence protest is to humiliate them without causing injury. Physical injury at least. There’s no doubt that milkshaking has led to a few bruised egos. Not only is this… END_OF_DOCUMENT_TOKEN_TO_BE_REPLACED