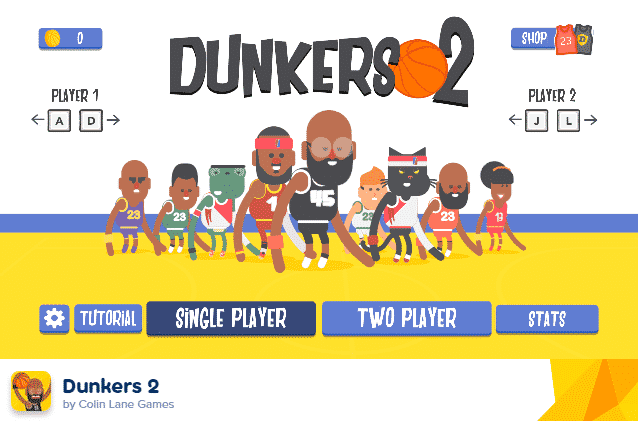 To what extent should a video game’s title explain its content? It’s a debate that, while not exactly raging, is always at the front of a developer’s mind when they’re creating a game. The title should be succinct, snappy and somehow revelatory of the content without being too much of a giveaway. A game’s title is incredibly important – it’s the thing that will sell the experience to those who are on the fence, unsure about whether to take the plunge or not.

Happily,it’s a debate that will come nowhere near Colin Lane Games’Dunkers 2, the followup to the successful (and pretty brilliant)Dunkers. Colin Lane Games’ previous titles include games likepunch-’em-up Undisputed Champ, pixelly wrestling extravaganzaWrassling and the self-explanatory Battle Golf, all of which is tosay they’ve got some pedigree when it comes to creatingmultiplayer-focused physics titles with a dash of sport to them.

All of this is, of course, not to mention the original Dunkers, which flew under many people’s radars but was one of our favorite and most underrated games of 2016. Its localized scope and lack of a smorgasbord of features was probably what did for it in mainstream circles; nevertheless, we thought it was a rollicking good time, so when it came to the prospect of a sequel we found ourselves quite excited.

Asit turns out, we were right to be excited. Dunkers 2 iterates on itspredecessor in new and interesting ways while still providing thesame compelling, manic central gameplay loop. If you’re a fan ofthe original Dunkers, you’ll find plenty to love here; you’ll bewell-served by the subtle ways Dunkers 2 has improved on theoriginal, and you’ll be pleased that the gameplay loop remainsessentially unchanged. If you’re a newcomer, don’t worry; you can still have fun playing Dunkers 2 even if you’ve never touched the original.

Although Dunkers 2 might look like a sports game, in truth it’s about as concerned with the minutiae of sports rules and regulations as it is with being an accurate simulation. Basketball is the flavor of the day here, but it’s merely window dressing for what is effectively a physics-based multiplayer game akin to titles like Starwhal and Get On Top. Colin Lane Games’ previous titles are pretty much in a similar vein, with the sports veneer merely serving to accentuate rather than define the crazy action.

Crazy action there most certainly is in Dunkers 2, and lots of it. The goal of the game, just like regular basketball, is to score points by dunking the ball into the opponent’s net. Unlike regular basketball, dunking is all you can do. There are no free throws, no penalties, no teammates and absolutely no semblance of regular basketball rules. Dunkers 2 has stripped back the essential experience of basketball so much that players literally have only two buttons at their disposal: one to jump right and one to jump left, with the length of the button press determining the strength of the jump.

Your character’s arm movement is controlled for you, which is to say every character simply swings their arms in a 360-degree arc. It’s up to you to control positioning and ensure that your avatar’s arms are in alignment with the net so you can score points. The central mechanics of Dunkers 2 are deceptively complex; they might appear simple at first, but you’ll soon realise that jumping and positioning are nine-tenths of the battle and will control whether you win or lose at any given moment.

You’ll learn most of this in the multiplayer mode, because although Dunkers 2 does have single-player, it’s mostly intended to be a multiplayer experience, or that’s how it feels, at least. The single-player content is mostly just a series of battles against increasingly tough AI opponents, and while there’s nothing inherently wrong with that, AI just can’t replace the frenetic energy another player brings to the experience. The arcade ladder is a great way for you and a friend to train up in preparation to face one another, as is the single-player tournament mode, but neither of these modes will replace the straightforward, manic fun of the multiplayer.

Dunkers 2 offers a fantastically enjoyable multiplayer experience that keeps feeling fresh even as it repeats itself. The central mechanics are enough to carry a game, and while this one won’t trouble you for the hundreds of hours many triple-A games demand, it’s a fine way to pass an afternoon or two with a friend. Unlockable shirts, balls and characters round off the package and give you something to work towards, but in the end it’s all about the ball, the net and the frenzied arguments you and your friends will have after a particularly heated bout of Dunkers 2.