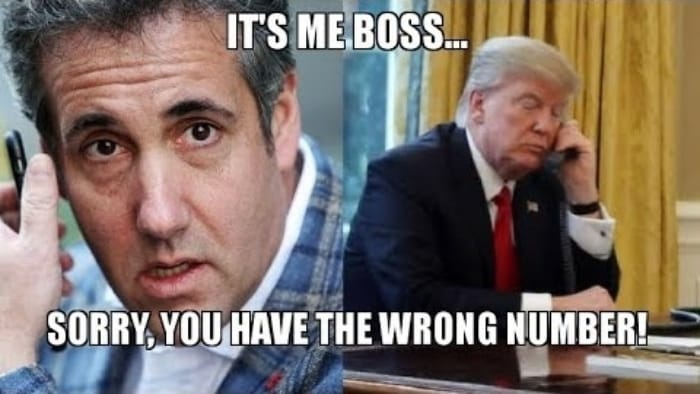 Michael Cohen is looking at three years in prison, and even though Trump can’t be charged because of current Justice Department guidelines, that doesn’t mean he’ll get off scot-free. In fact, the president has likely been shitting his pants from the moment he found out that the FBI raided his former lawyer’s office, as the moment he’s out of the office he will likely have to pay for his crimes. Trump is screwed and these Michale Cohen memes show just how bad his situation is.

Cohen was the attorney appointed to Trump’s real estate company for ten years, so it’s safe to say that the two formed a relationship over time. Still, the extent of their friendship is hard to determine as both sides are telling completely different stories. Cohen, who once said he would take a bullet for Trump has now turned on his former boss, and the outcome has been ugly. Here’s what Cohen had to say to the judge during his trial:

“I have been living in a personal and mental incarceration ever since the fateful day that I accepted the offer to work for a famous real estate mogul whose business acumen I truly admired. In fact, I now know that there is little to be admired … I was weak for not having the strength to question and to refuse his demands … Your Honor, this may seem hard to believe, but today is one of the most meaningful days of my life. The irony is today is the day I am getting my freedom back as you sit at the bench and you contemplate my fate.”

None Of My Business

After Cohen’s office was raided by the FBI, suddenly Trump wasn’t so close to the guy who’d worked for him for a decade. Trump’s new attorney, Rudy Giuliani, went as far as to say that Cohen is a story teller and a liar who would have said anything for a lesser prison sentence. Obviously, this is true. Cohen’s a lawyer, he literally went to school to learn to lie. Likely, he had to lie for all of his clients, including Trump.

With Trump’s refusal to cooperate, it was only a matter of time before the FBI got to Cohen. One of the biggest revelations to come from this situation was proof that Cohen had paid off both adult film star Stormy Daniels as well as Playboy Playmate Karen McDougal to keep their affairs with Trump quiet. Cohen pled guilty to making an excessive campaign contribution in the form of checks written out to the two women from one of Trump’s companies that Cohen was in control of. He said under oath that he was directed by Trump to do this and knew that it was illegal at the time.

To be a fly on the wall in the Clinton or Obama house when all of this went down! After all that talk about Hillary belonging behind bars, and now practically everyone who has ever shared a room with Trump since his decision to run for president is looking at a prison sentence. Wasn’t Hillary to be the corrupt one?

Cohen admitted in court to tax fraud and evasion of personal income tax, lying to a bank in order to get a loan, unlawful corporate contributions, and excessive campaign contributions. While he knew what he was doing was illegal, he claimed that he “…felt it was my duty to cover up his dirty deeds.”

Free Room And Board

Cohen was at the president’s side from the beginning of his campaign, a decision that screwed him in the end. At least he can look forward to free room and board for a while since he seemed to think that was a magnificent deal just a few years ago. As for Trump, it would appear that the only thing that has saved him from getting his own free room and board is his position as president. A former assistant U.S. attorney, Patrick Cotter, explained:

“Cohen has not only pleaded guilty to that crime but has testified under oath that he did it in conspiracy with Trump and that he, Cohen, is willing to testify against Trump. All things being equal, if Trump were not [the] , I would say his criminal law exposure was extreme and his chances of avoiding conviction small.”

There’s no question that whatever the relationship between Trump and Cohen was, it is no longer. After Trump and his people did their best to convince the media that the president hardly knew his company’s former attorney, he has changed his tune since Cohen’s sentencing. In one of his most recent Twitter rants, Trump called Cohen a rat and said:

“I never directed Michael Cohen to break the law. He was a lawyer and he is supposed to know the law. It is called ‘advice of counsel,’ and a lawyer has great liability if a mistake is made. That is why they get paid. Despite that many campaign finance lawyers have strongly stated that I did nothing wrong with respect to campaign finance if they even apply, because this was not campaign finance. Cohen was guilty on many charges unrelated to me, but he to two campaign charges which were not criminal and of which he probably was not guilty even on a civil basis. Those charges were just agreed to by him in order to embarrass the president and get a prison sentence, which he did-including the fact that his family was temporarily let off the hook. As a lawyer, Michael has great liability to me!” *

It should come as no surprise that Trump is doing his best to discredit anything found by the FBI in Cohen’s office. The president has done everything from call the search unlawful to a “witch hunt,” one of his fan’s favorite phrases. If he can get his followers to agree with this and create enough commotion, he’ll have a better chance of getting any evidence found during this search thrown out of court when it’s his turn. More from Trump’s Twitter rant:

“Remember, Michael Cohen only became a ‘Rat’ after the FBI did something which was absolutely unthinkable & unheard of until the Witch Hunt was illegally started. They BROKE INTO AN ATTORNEY’S OFFICE! Why didn’t they break into the DNC to get the or Crooked’s office?” *

Only time will tell what Trump’s fate will hold and how the documents found during this FBI raid will reshape his life. Like Cohen, however, most likely, he’s fucked.

*All of Trump’s tweets are quoted exactly how they were written and likely contain a number of spelling and grammatical errors.

The US arms sale industry is large and successful. More than 30% of exported weapons in the world come from the United States. They supply to no less than 90 nations making it one of the largest suppliers of weapons in the world. The US makes an estimate of almost 200 Billion dollars in annual… END_OF_DOCUMENT_TOKEN_TO_BE_REPLACED

Now that the election results are almost final, we all want to ask what’s going to happen to Donald Trump after leaving the office? All US Presidents inevitably reach the point where they leave the White House.  Besides, the constitution states that all US Presidents are subject to a two-term limit. What do former presidents… END_OF_DOCUMENT_TOKEN_TO_BE_REPLACED

This is the first time in modern history that the US held presidential elections in the middle of a pandemic. In truth, the US elections may have overshadowed COVID-19 and the side effects are limitless. America is facing a tough crisis of discontentment with the current administration. An understandable case but a situation that may… END_OF_DOCUMENT_TOKEN_TO_BE_REPLACED