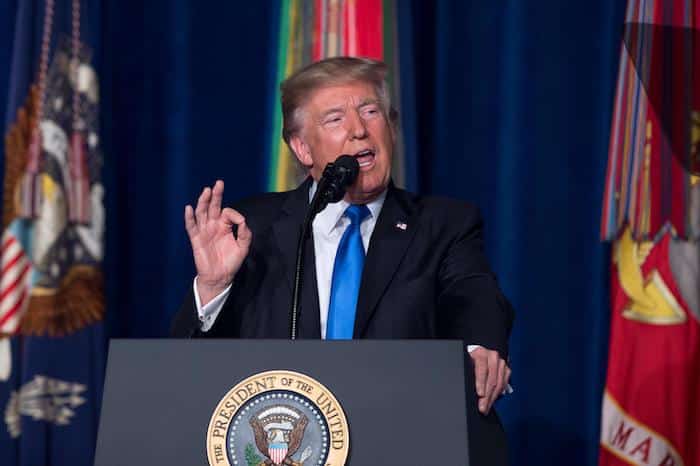 In the months leading up to his 2016 presidential campaign, attorney for Donald Trump Michael Cohen made several payments to women who previously had the displeasure of sleeping with the potential candidate. In his guilty plea to prosecutors, Cohen claimed that these payments were made at the direction of one Donny T.

See, if the Trumpinator actually did direct Cohen to send hush money payments to Trump’s former mistresses, then the amounts constitute illegal campaign contributions. And that, my friends, is an impeachable offense.

Not one to sit quietly in the face of overwhelming evidence against him, Donald Trump stood up proudly and called the whole thing total bullshit and defending the payments as “a simple private transaction.”

“Democrats can’t find a Smocking Gun tying the Trump campaign to Russia after James Comey’s testimony. No Smocking Gun…No Collusion.” @FoxNews That’s because there was NO COLLUSION. So now the Dems go to a simple private transaction, wrongly call it a campaign contribution,…

….which it was not (but even if it was, it is only a CIVIL CASE, like Obama’s – but it was done correctly by a lawyer and there would not even be a fine. Lawyer’s liability if he made a mistake, not me). Cohen just trying to get his sentence reduced. WITCH HUNT!

You know, a simple, private transaction that could prevent my campaign from exploding violently before it even crosses the starting line.

The thing is, no one is entirely sure why Donald Trump felt the need to pay out nearly $300,000 just a month before he descended that stupid escalator and became everyone else’s problem. Here are a few theories.

He Claims He Beat Syphilis

Very few men would mind people knowing they had a dalliance with a Playboy model. However, when that Playboy model (or fiancé of AJ Benza) laughingly declares that old Donald Trump was super proud of having beaten syphilis thanks to his powerful white guy willpower, it’s not going to play that well in the press.

Unless you live in Florida, I guess.

He’s Got a Secret Kid

Okay, this one is only half a joke, because genuine rumors have circulated that one of Trump’s former doormen has proof that the orange-tinted dummy had a kid out of wedlock. Now, the National Enquirer is involved, so take that for what you will.

That said, the editor of the Enquirer is a big fan of Donny-T … because of course, he is. So, perhaps Trump is shelling out his cash to keep a kid’s identity hidden. You know, like he does with Tiffany.

And I mean strange. If Donald Trump is shelling out six figures to keep his mistresses quiet, Donald Trump’s quirks must go way beyond ground level S&M. He’s got to be a furry.

Or his mistresses have to wear a Trump mask during coitus, or he’s constantly calling them Ivanka by accident … the possibilities are infinite.

He’s Got a Very Small Penis

You know, to match his small hands.

Okay, I know that’s a low blow, but I get a secret thrill thinking that Donald Trump (or one of his secretaries) has a “Donald Trump small cock” Google alert that fills POTUS in on all the teeny wang jokes that have been made about him in the last 24 hours.

Is the Donald likely to see a dick joke I made at his expense? No … but a guy can dream, right?

He Legitimately Owed Them the Money

In perhaps the least damning theory: maybe Donald Trump was just paying back debts. The douche has a reputation for borrowing money from various people, maybe he was just making good on a debt. I mean, honestly, you think Stormy Daniels needs hush money? She’s got a net worth of $2 million. A hundred and thirty thousand is chump change to her.

Of course, the only flaw in this plan is that Trump would probably have declared bankruptcy before he paid back any debt he owed.

Listen, obviously sex is an emotional, potentially overwhelming experience for people (especially if you’re doing it the right way), but when you’re weeping openly and sucking your thumb, there’s a real problem.

Karen McDougal Is a Russian Agent

Even as he was decrying the attacks on his potential campaign contributions as attacks, he redirected people’s attention to something he’s been saying over and over: there is no proof of Russian collusion.

But what if that argument is a misdirect? What if — in pointing his fingers at Russia — Trump is hoping to pull attention away from the fact that he was totally turned by a Russian spy. A woman so devious that she had the wherewithal to pose nude in Playboy just to cozy up to a rich dolt with a penchant for nailing women he knows other people have seen naked.

I mean, that would be too much. Honestly, if it’s true, Vladimir Putin deserves to run the world.

Hey, Let’s Close Things Out With a Fun Hypothetical!

At this point, prosecutors and outspoken Democrats are claiming that the charges revealed in early December might not only be impeachable but criminal, to boot. In short, it’s entirely possible that Donald Trump broke the law and could wind up in jail.

Now, before you start salivating all over your computer keyboard, that beautiful day is probably twelve to eighteen months away. The 2020 presidential election is probably a closer prospect than the official imprisonment of Donald Trump. And, hey, here’s a fun fact, a sitting president can’t be formally indicted.

In short, the best way to see Trump’s fallacy of a presidential term brought to a righteous (and prison-worthy) conclusion is to make sure that Trump is elected out of office in 2020. See: the best way to get rid of Trump is by using the electoral college, not by using Robert Mueller.

And once he’s kicked out of office, how much of us are going to want to indict some septuagenarian for paying off some ladies who’ve already had a tough run of things. After all, they already had to have sex with Donald Trump.

The world is devastated by the news that Britain’s Prince Philip, the Duke of Edinburgh, has died at the age of 99. Palace media confirms that the Duke has expired mid-day today, April 9th. The announcement did not contain any specifics on the cause of death. The United Kingdom will enter a state of national… END_OF_DOCUMENT_TOKEN_TO_BE_REPLACED

Who would have known that religious prophets would be among the most loyal supporters of former President Trump? In fact, it has been observed that the most conservative Christians may have been the right amount of push for Trump’s presidential win back in 2016. Since Trump’s election back in 2016, numerous self-proclaimed “prophets” have been… END_OF_DOCUMENT_TOKEN_TO_BE_REPLACED

President Biden falls and slips multiple times on the Airforce One Steps and PEOPLE ARE GOING CRAZY! What’s the big deal? Some people are hating, while others are making memes just for the fun of it. We are all human, aren’t we? Everyone’s expected to stumble some time in their lives. However, with the internet… END_OF_DOCUMENT_TOKEN_TO_BE_REPLACED