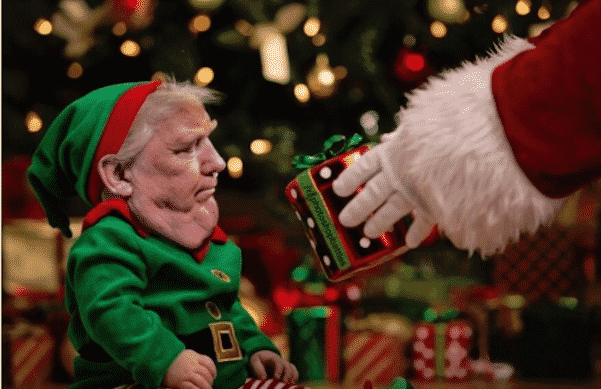 With the holidays coming up, some of my favorite Christmas movies are being played on repeat. They never seem to get old, which has me watching them on repeat and noticing how much Trump resembles many major characters. Mostly villains, of course. From Scrooge to that kid in “A Christmas Story,” here are some Christmas characters that inspire Trump’s political decisions.

Everything from Trump’s permanent scowl to his excessive instability resembles the Grinch and has spilled over into his political decisions. (Or lack of.) The Grinch part of Trump’s multiple personalities is actually beneficial for us as his laziness, selfishness, and overall hatred of people for no reason other than they exist gets in the way of his ability to do his job. and the fact that he sleeps until noon every day is probably what has prevented us from entering World War III.  But that’s just a few of the similarities between him and this big green grump.

“The nerve of those Whos. Inviting me down there – on such short notice! Even if I wanted to go my schedule wouldn’t allow it.

Unlike the Grinch, however, Trump’s heart won’t be growing in size any time soon and there’s no way in hell he’d ever be caught doing jazzercize.

2. This Dumbass In “A Christmas Story”

You have to admit that the kid who sticks his tongue to the pole, on purpose, in “A Christmas Story” was a moron. All it took was a triple-dog-dare and a bit of peer pressure, and the kid ended up spending the morning with his face stuck to a pole. This is likely what happened when Trump ran for president. Putin gave him a call, triple-dog-dared him to run and offered some voter influence that would guarantee him a win. It’s all part of their plot to take over the world.

Flick: “Are you kidding? Stick my tongue to that stupid pole? That’s dumb!”
Schwartz: “That’s ’cause you know it’ll stick!”
Flick: “You’re full of it!”
Schwartz: “Oh yeah?”
Flick: “Yeah!”
Schwartz: “Well I double-DOG-dare ya!”
Ralphie as an Adult: [narrating] “NOW it was serious. A double-dog-dare. What else was there but a ‘triple dare you’? And then, the coup de grace of all dares, the sinister triple-dog-dare.”
Schwartz: “I TRIPLE-dog-dare ya!”

Hey Trump! I triple-dog-dare you to think before you speak for once.

Harry has become an iconic Christmas villain, a character Trump likely aspires to become. Even though Harry was pretty stupid, there’s no questioning the fact that he was far more intelligent than his partner in crime, Marv. This makes Harry look smart in comparison, which Trump has been trying to do since he got into the White House. His attempt to be the smartest person in the room led to dozens of firings at the beginning of his term, but things have slowed down now.

Trump has successfully surrounded himself by people dumber than himself. It’s like he wants the world to burn or something.

4. This Rich Asshole From “Home Alone 2”

This character is one of the worst Christmas movie villains of all time. Oh wait…that’s just Trump being himself. Nevermind!

Ebenezer Scrooge is probably the worst Christmas movie villain throughout the entire history of Christmas movies. He’s cruel, greedy, and despite his wealth, he refuses to help the poor.  Trump’s political views are highly inspired by Scrooge’s tactics, likely because he hopes to die and be buried with all of his money. The president creates policies that help the only group of people in our country that don’t need it, ensuring the rich stay rich and the poor die that way. If I didn’t know better, this quote from the classic film could be a transcript of a conversation Trump had with his advisors. That is if the language was dumbed down a bit, the word “prisons” was replaced with “immigration detention centers”, and “union workhouses” replaced with “welfare programs.”

First Collector: “At this festive time of year, Mr. Scrooge, it is more than usually desirable that we should make some slight provision for the poor and destitute.”
Ebenezer: “Are there no prisons?”
First Collector: “Plenty of prisons.”
Ebenezer: “And the union workhouses – are they still in operation?”
First Collector: “They are. I wish I could say they were not.”
Ebenezer: “Oh, from what you said at first I was afraid that something had happened to stop them in their useful course. I’m very glad to hear it.”
First Collector: “I don’t think you quite understand us, sir. A few of us are endeavoring to buy the poor some meat and drink, and means of warmth.”
Ebenezer: Why?
First Collector: Because it is at Christmastime that is most keenly felt, and abundance rejoices. what can I put you down for?
Ebenezer: Huh! Nothing!

Scrooge may have been saved, but the ghosts of Trump’s past, present, and future would likely only pay a visit with homicidal intentions.

6. Biff Tannen From “Back To The Future”

Not only is the resemblance between Biff and Trump uncanny, but the two are only good at one thing. Bullying. And not an intelligent form of bullying but the kind you experience before reaching puberty. Trump practically mimicks Biff in his speeches and Twitter posts, there’s no way he doesn’t get his inspiration form this character.

Biff Tannen: “And my reports?”
George McFly: “Well, I haven’t finished those up yet, but you know, I… I figured since they weren’t due till…”
Biff Tannen: “Hello? Hello? Anybody home? Huh? Think, McFly. Think! I gotta have time to get them retyped. Do you realize what would happen if I hand in my reports in your handwriting? I’ll get fired. You wouldn’t want that to happen, would ya? Would ?”
George McFly: “Of course not, Biff. Now, I wouldn’t want that to happen. Now, look. I’ll, uh, finish those reports on up tonight, and I’ll run ’em on over first thing tomorrow, all right?”
Biff Tannen: “Not too early. I sleep Saturday. Oh, McFly, your shoe’s untied.” [jabs his finger up to George’s face] Don’t be so gullible, McFly.”

Oh wait, “Back To The Future” isn’t a Christmas movie…

The US arms sale industry is large and successful. More than 30% of exported weapons in the world come from the United States. They supply to no less than 90 nations making it one of the largest suppliers of weapons in the world. The US makes an estimate of almost 200 Billion dollars in annual… END_OF_DOCUMENT_TOKEN_TO_BE_REPLACED

Now that the election results are almost final, we all want to ask what’s going to happen to Donald Trump after leaving the office? All US Presidents inevitably reach the point where they leave the White House.  Besides, the constitution states that all US Presidents are subject to a two-term limit. What do former presidents… END_OF_DOCUMENT_TOKEN_TO_BE_REPLACED

This is the first time in modern history that the US held presidential elections in the middle of a pandemic. In truth, the US elections may have overshadowed COVID-19 and the side effects are limitless. America is facing a tough crisis of discontentment with the current administration. An understandable case but a situation that may… END_OF_DOCUMENT_TOKEN_TO_BE_REPLACED