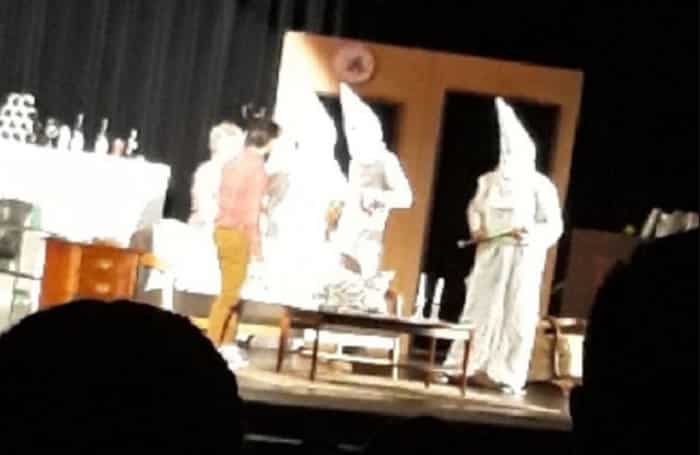 Racism is everywhere, more so these days. One would think that people already learned a lot after World War II, but apparently not. Hence, people can get rather sensitive in the face of apparent racist depictions, even if the message is anti-racism. So when one high school made their students wear a KKK costume for a play, you can bet the parents went ballistic.

The Arizona State University Preparatory Academy in Phoenix, Arizona, US, seemingly did not mean any harm. You see, they had a high school play last Friday and it involved the Ku Klux Klan (KKK) which is a racist faction who loved to dress up as spooky ghosts. The said university then dressed up some students in a KKK costume, this shocked the parents.

“We can talk about racial prejudice, we can talk about the insensitivity, but to have our children put on the robes and assume the characters, it’s wrong. There is no justification for it,” said one parent. However, the said play is about a dark comedy from Larry Shue called, “The Foreigner,” — a staple of professional and amateur theatre.

As such, it did have scenes where KKK members wearing KKK costume need to be depicted. Still, parents probably did not want their children wearing the costume. Hence, the school still had to apologize:

“We apologize if anyone was caught by surprise with the appearance of these characters. We are confident that a fair reading of the text of the play, and a fair interpretation of the intentions of students who performed it, reveals no endorsement of bigotry,” said the high school in a statement.

One parent was still not convinced, however, and said “At least inform the parents, give us the ability to make that decision. The KKK walked into my kid’s school Friday and I didn’t get to stop it.” What do you think of the school’s decision though? Feel free to discuss in the comments.

Seems it was just like yesterday when we all fought over and hoarded HEAPS of toilet paper for no reason at all. All the memories are rushing in as the US suffers from a gas shortage. As expected, gas shortage memes are everywhere to bring light to our currently sad situation. Along the US east… END_OF_DOCUMENT_TOKEN_TO_BE_REPLACED

Israel’s Iron Dome has protected the country against missile attacks for years. The Iron Dome in Israel is the biggest of its kind in the world. No other countries in the world use the same air defense system, meaning it is one of a kind. The tension between Israel and Gaza has been going on… END_OF_DOCUMENT_TOKEN_TO_BE_REPLACED

The world is devastated by the news that Britain’s Prince Philip, the Duke of Edinburgh, has died at the age of 99. Palace media confirms that the Duke has expired mid-day today, April 9th. The announcement did not contain any specifics on the cause of death. The United Kingdom will enter a state of national… END_OF_DOCUMENT_TOKEN_TO_BE_REPLACED