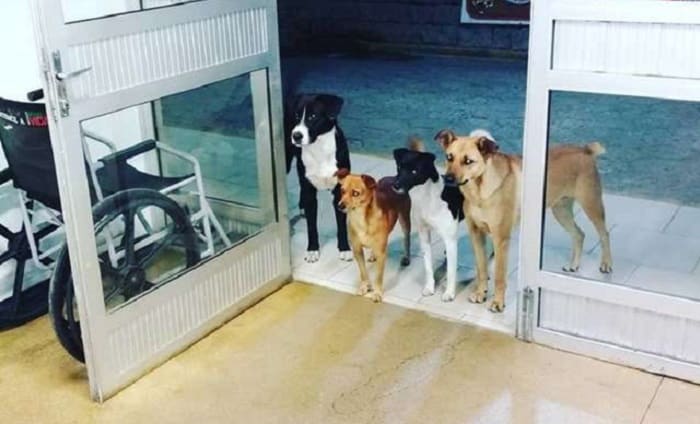 The world can be a cold and dark place. This is more apparent once you have become an adult. Hence, people try to find solace and comfort in small things. Luckily for us human beings, dogs are here to help and will readily provide us with happiness and hope in dark times. When one homeless dog owner even got sick, his 4 loyal pups patiently waited outside the hospital.

It happened on December 9 in Rio do Sul, Brazil. Around 3 a.m., a homeless dog owner named César approached a nurse named Cris Mamprim at Hospital Regional Alto Vale. Apparently, César had a pre-existing health condition and sought treatment. César was then admitted and underwent treatment for his said condition. Mamprim and the hospital:

However, while he was being treated, nurse Mamprim noticed something peculiar at the hospital’s door. Four healthy-looking dogs were waiting patiently outside for someone. They were even well-behaved enough to not set foot inside the premises. Mamprim took a photo and posted it online:

The post says, “A simple person, without luxury, who depends on help to overcome the hunger, the cold, the pain, the evils of the world, has by his side the best companions, and the exchange is reciprocal.”

Apparently, the dogs belonged to César and they were his family and friends through thick and thin. Mamprim did notice that the dogs seemed more well-fed than other homeless people’s dogs. César admitted that he often gave up his own food just so he can feed his loyal companions.

César eventually was released and joined his good boys. They even appeared to be relieved that their human daddy was okay:

Police Dog Gets Prepared For Winter In The Most Adorable Way, But He Doesn’t Like It

Gift-giving isn’t just a seasonal affair between friends, families and acquaintances. The art of gift-giving is also conducted on a national scale with countries often sending each other big, weird and expensive gifts. Experts in all things gifts, Vanilla Reindeer put together some examples of these expensive and odd gifts that have been shared between… END_OF_DOCUMENT_TOKEN_TO_BE_REPLACED

There are lots of ways you can make Pres. Trump feel welcome: you can offer him coffee, or mow a penis into a field for him to view as his plane lands. The willie in question has been chopped by Born Eco ahead of the arrival of President Trump, who visited the UK Monday for… END_OF_DOCUMENT_TOKEN_TO_BE_REPLACED

The year isn’t even halfway over, yet Donald Trump has managed to make a fool of himself and our country countless times. From inviting the national college football champions, the Clemson Tigers, all the way to the White House for some McDonald’s to his to the dreaded results of Mueller’s investigation, it has been one… END_OF_DOCUMENT_TOKEN_TO_BE_REPLACED

Republicans have always said that when they gained control in Congress, they would work to overturn Roe v. Wade and here they are, cashing in on that promise one state at a time. So far, Alabama, Arkansas, Georgia, Kentucky, Missouri, and Ohio have all passed incredibly restrictive laws on abortions, making it illegal for women… END_OF_DOCUMENT_TOKEN_TO_BE_REPLACED

If you’re on Snapchat, then you’ve probably played around with (and were likely horrified by) their filter gender swap filters. While you’re probably using these filters to send hilarious pics to your friends, some guys using them to create Tinder profiles. What likely started out as a joke has quickly evolved, and these guys are… END_OF_DOCUMENT_TOKEN_TO_BE_REPLACED

“Milkshaking” is a hilarious trend in Britain where a milkshake is thrown at and ideally lands on a far-right politician or activist. The point of this nonviolence protest is to humiliate them without causing injury. Physical injury at least. There’s no doubt that milkshaking has led to a few bruised egos. Not only is this… END_OF_DOCUMENT_TOKEN_TO_BE_REPLACED