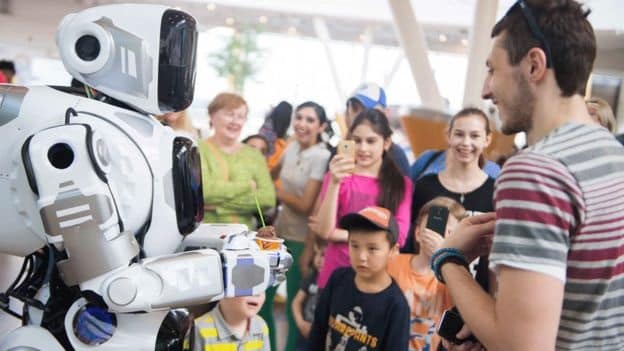 The future of modern society is certainly an exciting prospect since humans can get rather creative and resourceful with technology. One such near that we are all expecting are robots and artificial technology. Because of that, the inventors of the state-of-the-art Russian robot appears to have rushed the tech, as it has been exposed to be a man in a costume.

Boris, the talking and dancing Russian robot took the center-stage recently in Russia. It was supposed to serve as an example of the country’s technological prowess and was shown by Russian state television in a state-sponsored event called technology forum. Boris was shown dancing, speaking, and even singing in a metallic voice. Here he is:

“At the forum, there’s the opportunity to see state-of-the-art robots. Boris the Robot has already learned to dance, and not at that,”  said the event announcer.

However, some eagle-eyed viewers and journalists spotted something off with Boris, the Russian robot. Boris apparently displayed humanlike movements. A stage picture of Boris from an angle also showed a visible human neck. It wasn’t long after some backstage photos surfaced showing that Boris was indeed, a man in a costume:

Some bloggers even found out an exact same replica of the robot suit the man was wearing in a website called Robot Show. The organizers of the even did claim afterward that they did not exactly present Boris as a real robot, despite the statement from another event organizer earlier. They also did claim that the event was for children, meaning Boris was meant to be like Santa… who is also not real.

The moment he was inaugurated, immediate changes made by Biden made headlines across the country. These are many of the controversial issues and topics that were shunned and ridiculed by the former administration. Americans can finally breathe a sigh of relief that these concerns have finally reached government policies. It seems clear that Biden has been… END_OF_DOCUMENT_TOKEN_TO_BE_REPLACED

Presidential pardons are one and many in the history of the US. There are many times when US Presidents granted reprieves for their citizen’s misdeeds. The US President may grant a pardon for any individual, including himself, for any crimes done against the country and its citizens. This issue of Presidential pardons has been trending… END_OF_DOCUMENT_TOKEN_TO_BE_REPLACED