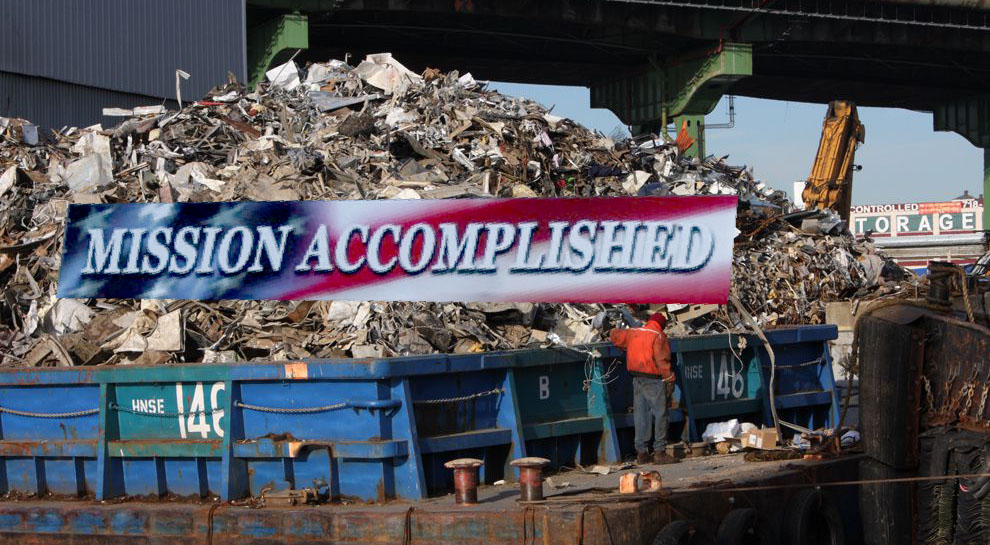 If you’re old and boring like me, you might from time to time sink into Wikipedia quicksand. The history of the world contains more wonders than fiction, and there’s no limit to the amusement found in the lives of the long-since. One such incident involved a garbage barge from the ancient days of when the world was in its infancy and dinosaurs roamed the Earth.

Known as the “Gar-barge” to its friends, this barge stacked high with trash trawled up and down the Atlantic Ocean endlessly, charting the route between New York City and Belize until someone could figure out how to properly dispose of the trash. Eventually, a home was found for the garbage, but not until people made a literal stink about it. If Trump was the captain of this barge, you can ensure that he would be hanging a celebratory banner of the front of it proudly emblazoned with his name.

It’s hard not to wonder if the same fate will befall the Trump administration. Will there be a time when people laugh at him, give him funny nicknames, and then bury him in the great garbage heap of history? If we are as lucky as we have been unfortunate, he will earn a permanent spot as the worst President of the United States—hopefully, anyway. I quail to think of what you would need to do to outdo Trump’s incredible incompetence.

It’s gotta be hard to be a narcissist that is so obviously failing at everything. We can’t envy Trump that opinion of himself, because it’s also largely accurate. If you build your entire psychology on a vaguely-defined sense of “winning,” implying there must be a loser in this equation who will obviously not be Trump, you’re going to be pretty let down when you lose over and over again.

Furthermore, Trump would have you believe that he has been cleared by the Mueller investigation. Check out the dens of collective fantasy that pass for Donald Trump fan forums these days. To believe them, you’d think Mueller had dressed up in hi viz and stood on top of the White House declaring his abject failure to find anything Trump has ever done wrong. These folks would tell you that his existence so sainted that even the most glowing hagiography would be too little to do his majesty justice.

There is, of course, no merit to any of this treasonous fanfare. Trump was not cleared by Mueller at all. In fact, it’s obvious to anyone who can read that Trump is the “Individual 1” frequently referenced in multiple legal documents surrounding the Mueller investigation, such as evidence given in exchange for lighter prison sentences by Michael Cohen. Not that Cohen was Trump’s number one aide or anything; Cohen has been retconned into a worthless, coffee-fetching scrub for the convenience of the Trump machine.

It’s honestly hard to tell if Trump actually thinks he’s innocent. His performance of a deluded narcissist is extremely compelling, and it’s hard to deduce just how much of it is willful self-delusion and just how much is utter detachment from reality. The second you see Trump captaining a garbage schooner to Belize, however, the jig is most certainly up.

Teresa May’s Brexit Plan Is Just Going Fine, Thank You, How Are You?