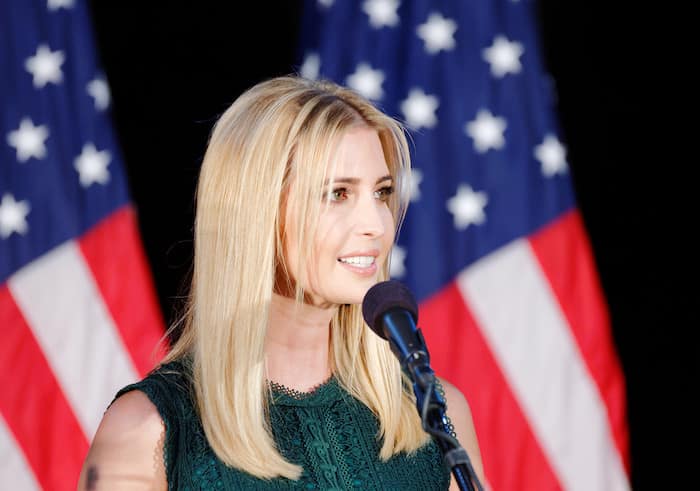 Every day, the world wakes up hungry for another installment of the world’s most salacious ongoing soap opera, Days of Our White House. Week after week, family scion, that rambunctious Donny T, finds new ways to fail upward while distracting a legion of followers with his self-important song and dance.

While the rest of us await the next installment of the Trump saga — the current Will-They-Won’t-They Indictment storyline is a real nail biter — the person to keep your eyes on is the First Daughter, Ivanka Trump, the doe-eyed dummy with the potential to do some real damage.

Because modern journalism means nothing if it’s not in list form, financial outlet Forbes spends a lot of their time organizing lists of powerful people, rich people, and people who are both rich and powerful. They may be insipid, but they’re nonetheless well researched and often accurate.

That’s why it’s such a bummer to see the results of the 2018 List of the Most Powerful Women in Politics and Policy. Things start off all right. Germany’s kick-ass German chancellor Angela Merkel holds her own as the number one most powerful woman in politics. Not too far down the list, however, you’ll see some lanky blonde who’s never won an election in her life. Ivanka Trump sits proudly at number 6.

When it comes to overall ranking, FDOTUS clocks in at number 24. That’s one step lower than the Queen of England.

The real danger of Ivanka Trump is the sheer mystery surrounding her role in the White House and her influence over the President. Even Forbes writes in their full profile of Ivanka, “it’s unclear how her influence in the oval office plays out.”

Time and again, this blonde scoop of vanilla shows up in important spots. Take, for example, last year when Trump had to leave a G20 meeting, and Ivanka moved up to his seat. The Trump administration called the move completely normal.

Other people said other stuff.

Ivanka Trump, unelected, unqualified, daughter-in-chief, is representing the US at the G20 summit next to May, Xi, Merkel. Photo @LanaLukash pic.twitter.com/fvs0EMy8z7

Either way, the implication is that when Donald needs a seat-filler, Ivanka is the face he wants where his ass should be … wait, that came out wrong …

The Fall and Fall of John Kelly

Things were never really rosy for Trump’s now-former chief of staff John Kelly. From the moment he took the job, he’s been embroiled in scandal. What do expect when you’re taking the second-in-command spot under Donald “Grab ‘Em By the Pussy” Trump. For a while, however, it seemed the stoic general fit right in.

Hell, when scandal hit home, he even, “tried to get everybody else to lie,” to cover it up. That’s Trump 101. Now, however, Kelly is on his way out, and sources close to the White House lay the blame squarely at the feet of Ivanka Trump and her husband, Jared Kushner, a man with his own on-again-off-again relationship with the president. It says a lot of a woman’s power that she could get the White House chief of staff fired just by manipulating Daddy for a few weeks.

Ken and Barbie Run the World

It would seem that in the power vacuum created by John Kelly’s departure, Ivanka and her husband have stepped up to assume control. John Kelly often claimed that Ivanka and Jared were simply “playing at government.” Well, it seems they’re playing for keeps, now. One of Trump’s closest allies told The Failing New York Times that political Ken and Barbie were, “running the building,” now that old Stick-in-the-Mud Kelly was out on his ass.

That’s probably an excellent notion for Donald Trump, who, according to reports, fucking hates being President. Having some chipper young folks to take some of the pressure off his shoulders is probably something of a Godsend.

At least, for Trump.

Hear me now when I say that Ivanka Trump may have the noblest intentions. She may even be very smart (you’d have to convince me, but then again, I’m a cynic). Unfortunately, all the gumption in the world won’t level the playing field when you’re across the table from Xi Jinping or Vladimir Putin. These fellas are world class operators with decades of political experience. Donald Trump isn’t even qualified to sit across the table from them, let alone his daughter who couldn’t even manage a line of handbags.

When the world sits down to negotiate, you don’t want to put forth a woman who compels Angela Merkel to make this face:

That’s the expression of a competent, knowledgeable woman who sees some poor, young dummy in way over her head.

The world is devastated by the news that Britain’s Prince Philip, the Duke of Edinburgh, has died at the age of 99. Palace media confirms that the Duke has expired mid-day today, April 9th. The announcement did not contain any specifics on the cause of death. The United Kingdom will enter a state of national… END_OF_DOCUMENT_TOKEN_TO_BE_REPLACED

Who would have known that religious prophets would be among the most loyal supporters of former President Trump? In fact, it has been observed that the most conservative Christians may have been the right amount of push for Trump’s presidential win back in 2016. Since Trump’s election back in 2016, numerous self-proclaimed “prophets” have been… END_OF_DOCUMENT_TOKEN_TO_BE_REPLACED

President Biden falls and slips multiple times on the Airforce One Steps and PEOPLE ARE GOING CRAZY! What’s the big deal? Some people are hating, while others are making memes just for the fun of it. We are all human, aren’t we? Everyone’s expected to stumble some time in their lives. However, with the internet… END_OF_DOCUMENT_TOKEN_TO_BE_REPLACED