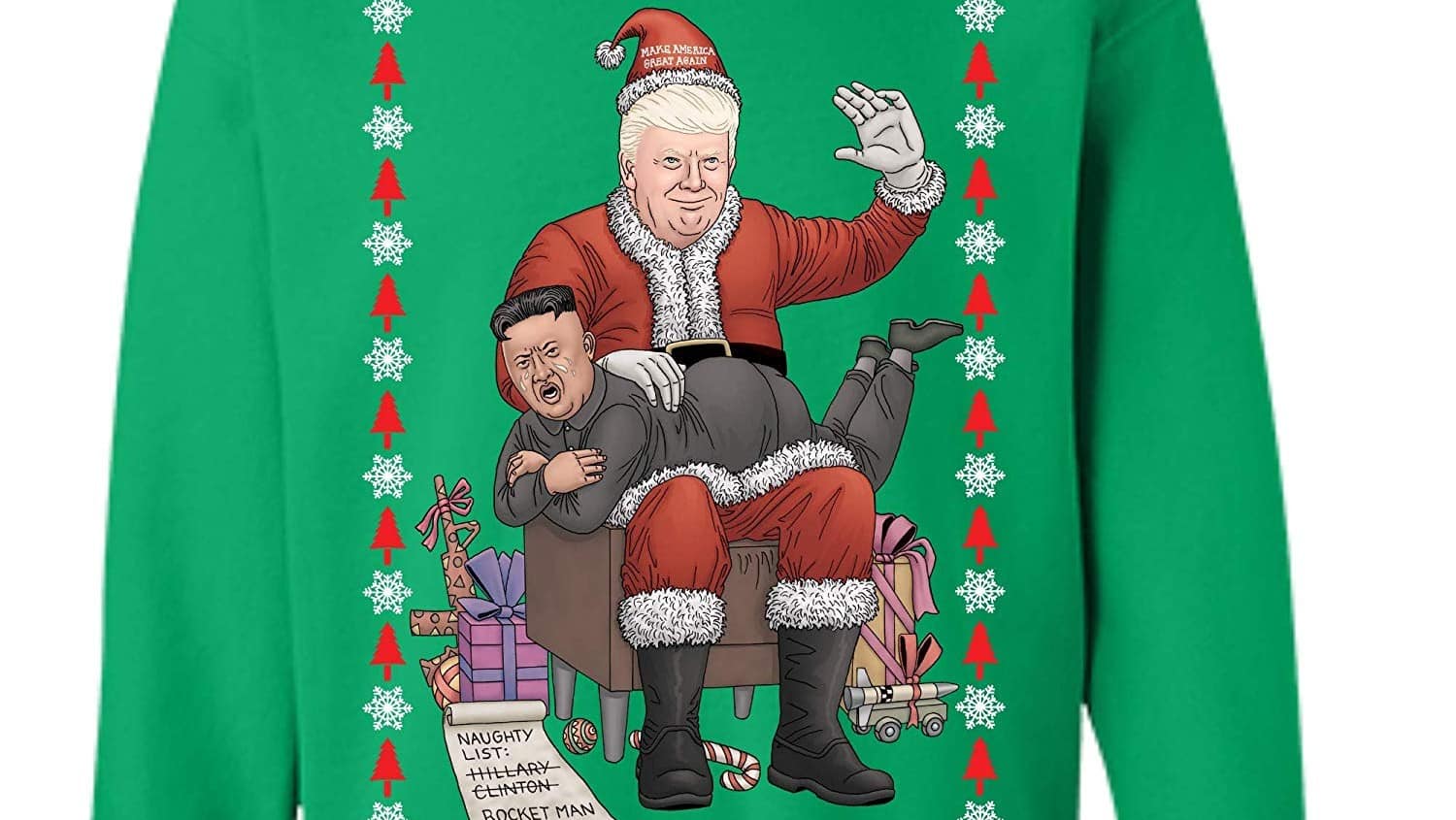 Ugly Christmas sweaters are still a thing and this year’s play on the popular party trend is going political. These days, nothing is uglier than the Republican agenda, especially when it’s paired with a holiday sweater. Step up your game this season and piss off your conservative relatives with one of this unique political ugly Christmas sweaters!

Your Christmas is gonna be this year in this Trump themed ugly Christmas sweater. It’s hilarious, yet only mildly offensive if you’re not looking for holiday drama over politics. Granted that anything with Trump’s face on it should rightfully be considered ugly, this sweater is actually kind of nice to look at.

2. This Is Going To Be A Great Christmas

This Christmas is going to be great. Very good holiday season. I promise you that. Everyone thinks so. We’re seeing record numbers in sales. Democrats will have you believe otherwise, but our economy is better than it’s been in years. Everyone’s gonna wearing this ugly sweater, you’ll see. This Christmas is gonna be huge!

This mildly racist ugly Christmas sweater is the perfect outfit to wear to any holiday dinner you have planned this year. Especially those who will be dining among fans of Trump and his immigration policies. It’s cheeky and ugly all wrapped in one!

If Jesus existed during our time, Trump would demand to see his birth certificate. Then when one was produced, he’d manage to convince his minions that it was fake news. He’d stick Jesus in one of his immigration detention centers and bash him and his family on Twitter until Trump himself was considered the next Messiah. It’s a dictator’s world, and we just live in it. Be prepared to start some serious debates when you wear this ugly political sweater to Christmas dinner!

You haven’t lived until you’ve seen this ugly sweater depicting Trump as Santa Claus spanking a very naughty Kim Jong Un. Labeled “Rocket Man” on Trump’s naughty list, his name is written directly after Hillary Clinton’s. I wonder if Trump threw on the red suit and gave her a spanking as well.

We all know that Putin loves to ride animals topless, so there’s no doubt that Trump’s budding relationship with the Russian dictator will lead him towards a similar hobby. Or at least we’d like to think so. If your political interest includes Trump’s inappropriate relationship with Putin, then this ugly sweater might be right up your alley!

7. God Bless Everyone Except…

Our dear, president would like to wish us all a very happy holiday and to bless us all. Except, of course, Mexicans, women, and other immigrants. The designers behind this hilarious ugly sweater obviously didn’t have enough room for everyone else Trump would exclude from his blessings including the LGBT and transgender community, black people or anyone who can’t pass for white, poor people, Dems and liberals, members of the media, and Hillary Clinton.

The US arms sale industry is large and successful. More than 30% of exported weapons in the world come from the United States. They supply to no less than 90 nations making it one of the largest suppliers of weapons in the world. The US makes an estimate of almost 200 Billion dollars in annual… END_OF_DOCUMENT_TOKEN_TO_BE_REPLACED

Now that the election results are almost final, we all want to ask what’s going to happen to Donald Trump after leaving the office? All US Presidents inevitably reach the point where they leave the White House.  Besides, the constitution states that all US Presidents are subject to a two-term limit. What do former presidents… END_OF_DOCUMENT_TOKEN_TO_BE_REPLACED

This is the first time in modern history that the US held presidential elections in the middle of a pandemic. In truth, the US elections may have overshadowed COVID-19 and the side effects are limitless. America is facing a tough crisis of discontentment with the current administration. An understandable case but a situation that may… END_OF_DOCUMENT_TOKEN_TO_BE_REPLACED