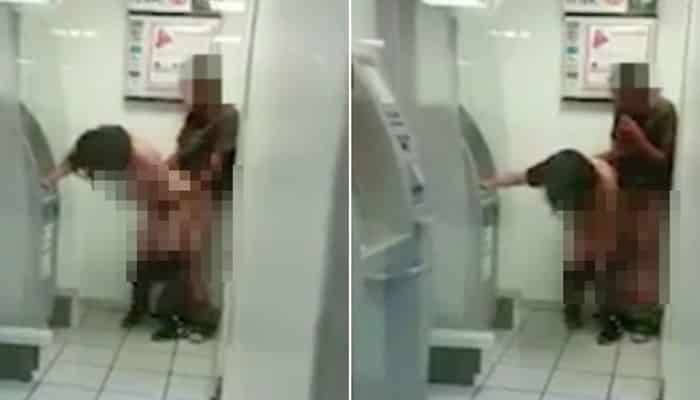 A pair was captured by a looker-ons cellular phone, as they were having coitus in front of a Santander Bank ATM machine in Spain.

A couple in Spain (seen above), recently elected to have intercourse in front of a bank. Maybe, they were bored. Or received unanticipated news about extra, random money in their account?

Either way, they just couldn’t hold off any longer.

The two got wrapped up in the moment of passion, literally.

The man in the blurred image, is seen thrusting up and down with his beau on the ground – meanwhile seen donning a rucksack! The lady has her skirt hiked up and legs spread as the man humps Bobby Brown-style with his trousers down around by his ankles. Individuals wandered by in disbelief, and some in utter disgust.

Imagine – going to the bank and and running into something like this! Out of courtesy (and curiosity), would one would have to wait until they were finished before retrieving money? Too, is this what they mean by ‘dirty money?’ We’ll get back to you on that..

Mysterious ATM Suddenly Appears In The Woods In Maine